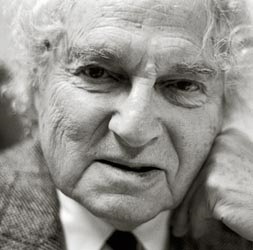 Herbert Aaron Hauptman is an American mathematician and crystallographer who, along with Jerome Karle, received the chemistry prize for developing mathematical methods for deducing the molecular structure of chemical compounds. They based their calculations on the patterns formed by X-rays diffracted by crystals. X-rays have such short wavelengths that they will detect individual atoms. X-rays striking a crystal are deflected and concentrated in different directions, and the intensity of the deflected rays is measured. Hauptman and Karle devised equations to translate the information directly into a structural ‘map’. Since each equation is only statistically probable, it is necessary to make a large number of measurements and to obtain many times more equations than the number of unknowns to be determined.

The duo first published their basic equation in 1953, but for many years it was largely ignored. Gradually, however, crystallographers began using it to determine the three-dimensional structure of myriad biological molecules, including those of many hormones, vitamins, and antibiotics. Previously, it had taken about two years or more to deduce the structure of a simple biological molecule; by the 1980s, using computers to perform the calculations needed, it could be done in about two days.

Hauptman was born in New York City, in 1917, the eldest of three brothers. He attended Townsend Harris High School, where he developed an interest in science and mathematics, and went on to the City College of New York, where he was a classmate of Karle. Graduating in 1937, Hauptman went on to gain an MA in mathematics at Columbia University in 1939. After the war, in 1947, Hauptman was reunited with Karle at the Naval Research Laboratory in Washington, DC. At the same time, he enrolled at the University of Maryland, where he gained his PhD in 1954.

Karle’s knowledge of physical chemistry and Hauptman‘s background in mathematics proved a perfect match for their collaboration on the study of crystal structures. Their 1953 monograph, Solution of the Phase Problem I. The Centrosymmetric Crystal, contained the main ideas, and has been revised and refined ever since. Hauptman joined the crystallographic group of a small non-profit biomedical research institute, the Medical Foundation of Buffalo (MFB), in 1970, rising in 1972 to the role of research director and later president. MFB was renamed the Hauptman-Woodward Medical Research Institute, Inc to recognize the symbiotic nature of science and philantropy by honoring Hauptman and Helen Woodward-Rivas who provided the seed funds for the institute. Hauptman also served as Research Professor in the Department of Biophysical Sciences and Adjunct Professor in the Department of Computer Science at the University at Buffalo, where he was a Distinguished Professor. In 1940 he married Edith Citrynell. They have two daughters, Barbara (b.1947) and Carol (b.1950).