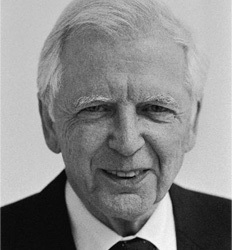 German virologist Harald zur Hausen was awarded half of the 2008 Nobel Prize for his discovery of the role of human papilloma viruses (HPV) in cervical cancer. Ultimately his work led to the introduction in 2006 of a vaccine to combat HPV.

Zur Hausen was born on March 11, 1936 and grew up in the city of Gelsenkirchen-Buer. He earned a place at the University of Bonn where he studied medicine and after passing his preliminary medical examination, continued his studies at Hamburg and the Medical Academy in Düsseldorf, where he completed his MD thesis in 1960. After two years as a medical assistant, during which he developed an interest in gynaecology and obstetrics, he joined the University of Düsseldorf as a laboratory assistant, exploring virus-induced chromosomal modifications. Seeking greater scientific knowledge, zur Hausen moved to the US in 1965 to work at the Philadelphia Children’s Hospital with German virologists Werner and Gertrude Henle.The Henles’ laboratory was working on the newly discovered Epstein-Barr virus (EBV) and zur Hausen helped demonstrate that a cancer virus (EBV) can transform healthy cells (lymphocytes) into cancerous cells.

He became an assistant professor at the University of Pennsylvania but in 1969 returned to Germany to head a research team at the University of Würzburg, where he soon succeeded in proving that EBV DNA persists in every tumour cell in Burkitt’s lymphoma. In 1972 he moved to the University of Erlangen-Nuremberg as chairman of the newly established Institute of Clinical Virology and began to examine the established theory that cervical cancer may be caused by a virus. Herpes simplex was the main suspect but the team drew a blank and concentrated instead on links to the papilloma virus in genital warts. Initial tests were inconclusive but the team published a preliminary report of their work in 1974 and eventually identified several HPV types.

In 1977 zur Hausen was appointed chairman of the Institute of Virology of the University of Freiburg. He took most of his team with him, including Lutz Gissmann and Ethel-Michele de Villiers, who would later become his wife. In 1979 they isolated the first DNA from genital warts, HPV-6. By 1983 they had reached HPV-16, which they discovered was present in around half of cervical cancer cases. The following year they isolated HPV-18, accounting for a further fifth of cases. Incredibly, pharmaceutical companies at first dismissed zur Hausen’s suggestion of developing a cancer vaccine, one firm saying there was ‘no market’ for it. Fortunately this view later changed and the HPV vaccine became available in 2006.