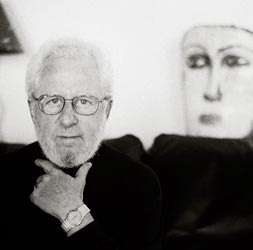 Alan Heeger grew up in Omaha, Nebraska. He completed his Bachelor of Science degree at the University of Nebraska where he majored in Physics and Mathematics. He did graduate work at UC Berkeley where he completed his PhD in Physics in 1961. His academic career began as Assistant Professor at the University of Pennsylvania in 1962. He was made Professor in 1967 and served at PENN as Laboratory Director and Vice Provost for Research. Prof. Heeger moved to UC Santa Barbara in 1982. He currently holds the Presidential Chair at UCSB where he serves as Professor of Physics and Professor of Materials. He heads a research group at the university’s Center for Polymers and Organic Solids. Prof. Heeger has more than 700 publications in scientific journals and is widely known for his pioneering research in and the co-founding of the field of semiconducting and metallic polymers.

He is the recipient of numerous awards, including the Nobel Prize in Chemistry (2000), the Oliver E. Buckley Prize for Condensed Matter Physics, the Balzan Prize for the Science of New Materials, the President’s Medal for Distinguished Achievement from the University of Pennsylvania, the Chancellor’s Medal from the University of California, Santa Barbara, and honorary doctorates from universities in the United States, Europe and Asia. He is a member of the National Academy of Science (USA), and the National Academy of Engineering (USA). Prof. Heeger holds approximately 50 patents, which have broad commercial potential for use in polymer electronics (“plastic” electronics) with applications in areas ranging from electroluminescent displays (for cell phones, PDAs and laptops) to solar cells and integrated electronic circuits. He founded UNIAX Corporation in 1990; UNIAX was acquired by DuPont in 2000. Prof. Heeger serves on the Board of Directors Konarka Technologies Inc., Diode Solutions Inc. and RitDisplay (Taiwan), and he is a Venture Partner in NGen Partners. His research efforts continue to focus on the science and technology of semiconducting and metallic polymers. Current interests include biosensors and the detection of specific targeted sequences on DNA.