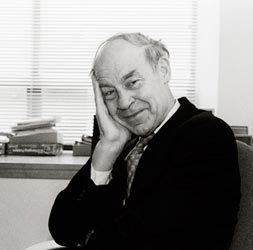 Dudley Herschbach is an American chemist and educator. With Yuan Lee and John Polanyi, he received the 1986 Nobel chemistry prize for his pioneering use of molecular beams to analyse chemical reactions. Molecules are in constant motion, even in solids. In gases and liquids they move in random directions at unpredictable individual speeds. Herschbach crossed beams of molecules to provoke single collisions and detect elastic, inelastic or reactive outcomes. The technique was a major advance in the field of reaction dynamics. Lee, working initially with Herschbach, further developed the method for use in general reactions. Polanyi developed infrared chemiluminescence to trace molecular activity in reactions.

Herschbach was born in San Jose, California, in 1932, the first of six children. He grew up among fruit orchards, cows, pigs, and chickens. He enjoyed a healthy mix of farm work, sports, and wide reading. As his family did not know anyone who had graduated from college, he didn’t expect to go. He owed that to inspiring teachers and generous scholarships. He entered Stanford University in 1950, recruited as a football player. After his first year, he had found academic study and labs more exciting than football. He took up to ten courses a term, attaining a BSc in mathematics in 1954 and MSc in chemistry in 1955. His mentor, Harold Johnston, had imbued Herschbach with his passion for chemical kinetics. A key episode in 1955 occurred in a physics course that briefly mentioned the molecular beams used by Otto Stern in the 1920s. That captivated Herschbach to pursue beams to do “single-collision” chemistry. He was convinced to first study more physics and molecular dynamics. He went on to Harvard University, obtaining an AM in physics in 1956 and chemical physics in 1958, with E. Bright Wilson, Jr. as his mentor.

He joined the University of California at Berkeley in 1959 as Assistant Professor of Chemistry. His initial experiments used beams of alkali atoms reacting with halogen containing molecules. Those were chosen because they gave unusually high yields of alkali halide products, found 40 years before by Michael Polanyi — John’s father. Herschbach returned to Harvard in 1963 as Professor of Chemistry. Yuan Lee joined his group in 1967 as a postdoctoral fellow and led the construction of a ‘supermachine’ which combined supersonic crossed beams with mass spectroscopy. The new machine brought the field “beyond the alkali age”, including access to the same reactions elucidated by John Polanyi’s infrared spectra method. The beam research and much else thrived over the next four decades, attracting graduate students and postdocs of exceptional ability and adventurous spirit.
Herschbach taught a wide range of courses, graduate and undergraduate, particularly freshman courses. He undertook evangelical efforts to enhance K-12 science education and public understanding, centered for 20 years with the Society for Science and the Public, which publishes Science News and conducts major science fairs. After becoming Emeritus at Harvard in 2003, he kept teaching seminar courses. Also, he served as an itinerant part-time physics professor at Texas A&M University, during 2005-2018.

His greatest wonder is his wife, Georgene, and their progeny. They married in 1964 and have two daughters and five grandchildren.