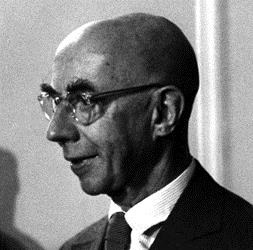 Nobel Prize in Physics 1925 together with James Franck
"for their discovery of the laws governing the impact of an electron upon an atom".

Gustav Hertz was a German physicist born on July 22, 1887 in Hamburg, Germany. He was the nephew of the renowned physicist Heinrich Hertz and won the Nobel Prize for physics in 1925 for his investigations into the interactions of electrons and atoms.

Hertz attended school in Hamburg before moving on to university in Göttingen in 1906, where he began studying mathematics and mathematical physics. Before finishing his studies Hertz would move to Munich, where he studied the new quantum theory under Arnold Sommerfeld and finally to Berlin where, under the guidance of Max Planck, he graduated with a Ph.D. in 1911. Here he was introduced to experimental physics while working with, among others, James Franck, a scientist who would play an important role in Hertz’ career.

In Berlin, he became a research assistant at the Physics Institute in 1913 and began working with Franck on experiments investigating the interaction of electrons with atoms. Soon after, they published their findings on mercury atoms, now known as the Franck-Hertz experiment [J. Franck, G. Hertz, Verhandlung der Deutschen Physikalischen Gesellschaft, Berlin 16, 512 (1914)], for which they would later be awarded the Nobel Prize.

In the experiment electrons where accelerated between two electrodes in a glass container containing free mercury atoms (mercury vapor) and the total current between the electrodes was measured. After some trial and error to find suitable vapor pressures and electric field gradients, Frank and Hertz were able to show that the electric current increased as expected with increasing voltage until a voltage of 4.9 V was reached at which time the current de- creased precipitously. Thereafter, the current increased again until the voltage reached a value of 9.8 V, 14.7 V, etc. That is, the current decreased suddenly at whole number multiples of 4.9 V.

The two scientists sought to explain their results with modern concepts by claiming that the mercury atom could only accept energy in quantized amounts equal to 4.9eV. Before the applied voltage reached this level, the electron-atom interactions were limited mainly to elastic collisions and limited energy loss. At 4.9V applied potential the most energetic electrons were capable of exciting the mercury atom once, while at 9.8 V an electron could participate in two inelastic collisions, and so forth. After the excitation, the mercury atom should release a radiation with a frequency of 2536 Å upon returning to the ground state. This radiation Franck and Hertz also found and reported shortly after their 1914 paper. Their initial interpretation also considered the transfer of energy from electron to atom to be equal to the ionization energy of the mercury atom, the release of radiation coming from an electron recombining with the charged atom. However, we know now that the 4.9 eV corresponds to a transition between the two lowest bound states.

Apart from supplying an independent method for calculating Planck’s quantum of action, h, the Franck-Hertz experiment is usually considered to be the experimental evidence supporting the quantum atom introduced by Niels Bohr in 1913. In fact Bohr himself was the first to point this out, as Franck and Hertz at first failed to make the connection. But the results of Franck and Hertz also provided evidence for the physical structure of the atom itself, at the time still unsettled science, and not only for the atom’s quantum nature.

The idea of a corpuscular nature of matter has been around for millennia with Leucippus and Democritus often receiving credit for the initial notion of atoms in the 5th century B.C. However, modern concepts of atoms began with John Dalton who formulated his atomic theory in the years following the turn of the 19th century. Later, in 1827 the botanist Robert Brown observed the dynamics of particles from pollen grains in water (Brownian motion). The nature of these dynamics remained unsolved until the end of the century when the necessary mathematical models were first devised, most notably by Thorvald N. Thiele. In 1905, Einstein published the first complete mathematical description of Brownian motion which was verified experimentally in 1908 by Jean Baptiste Perrin and is considered to be the decisive evidence for the particle nature of matter.

Four years earlier, J.J. Thomson had already proposed his “plum pudding” model of the atom in which rings of negatively charged electrons are imbedded in a sphere of positive electricity. This heightened the debate about the structure of the atom and was continued by Ernest Rutherford in 1911 with his publication of the nuclear atom: a central, charged nucleus possessing most of the mass of the atom with small bodies of opposite charge surrounding it. Although known to be the correct model now, Rutherford’s ideas were subject to criticism at the time, for example, how the charged particles surrounding the nucleus are to remain in orbit? If they were constantly accelerated they must, according to classical electrodynamics, continuously lose energy. One would, therefore, expect a continuous emission spectrum from an atom and not the discrete lines actually observed.
In 1913, Niels Bohr was able to provide some clarification by introducing quantum orbits to the Rutherford model. However, Bohr, along with other scientists of the time, was careful to refer to the Rutherford atom as a theory and not fact. In his first article, Bohr also considers the Thomson atom, if only briefly, and the article immediately following Bohr’s considers the formation of molecules also based on Thomson. Thus, Thomson’s theory certainly still enjoyed support at the time of Franck and Hertz’s discovery.

Their new insight into the atom helped, therefore, to answer a question more profound than simply the validity of the Bohr model of the atom. Because Bohr’s theory was based on Rutherford’s model, Franck and Hertz also provided evidence for the nucleus-based structure of the atom and also helped cement the recently proven idea of the corpuscular nature of matter.

The issue of the quantum nature of the atom was, however, by no means settled after Franck and Hertz published their results in 1914. Quantum mechanics would be subject to more than a decade of further birth pangs before it finally arose out of the old quantum theory in 1926 and gained acceptance.

Soon after his discovery, Hertz became an officer in the First World War and in 1915 joined the special forces for chemical warfare. In the same year he was critically wounded when the wind shifted during an operation and sent the gas back toward the German troops. After a long recovery, Hertz left the army and returned to Berlin where he became a privatdocent in 1917 and remained at the University of Berlin until 1920 investigating the interaction of slow electrons and gas molecules.

From 1920 until 1925, Hertz worked on the physics of gas discharges in Eindhoven, Nether- lands at the Philips’ Incandescent Lamp Works which was one of the first private companies to support basic research. In 1925, he became resident professor and director of the Physics Institute at the University of Halle before moving back to Berlin in 1928 to become director of the Physics Institute at the Charlottenburg Technical University (today the Technical University of Berlin) and contributed to the field of gas diffusion.

After the Nazi rise to power, Hertz, of patrilineal jewish descent, resigned his position at the University in 1935 in protest (like James Franck) and moved to the Siemens and Halske Company in Berlin. There he continued to work on gas diffusion until the end of World War II and in 1945, along with a group of other East German scientists, was taken by the Soviet army to the Black Sea town of Sukhumi in the Soviet Union. He conducted research in nuclear energy and radar until 1954 and then returned to Germany to become professor and director of the Physics Institute at the Karl Marx University in Leipzig where he took up a central role in the East German nuclear physics program.

Hertz was made emeritus professor in Leipzig in 1961 and spent his remaining years in Leipzig and Berlin. He was made a member of the Academy of Sciences of the GDR and received the Max Planck Medal of the (West) German Physical Society.

In 1919, Hertz married Ellen Dihlmann with whom he had two sons and in 1943 he married Charlotte Jollasse after the death of his first wife. Gustav Hertz died on October 30, 1975 and is buried in Hamburg in the family grave.

[6] Ernest Rutherford, The Scattering of Alpha and Beta Particles by Matter and the Structure of the
Atom, Philosophical Magazine 21, 669-688 (1911)