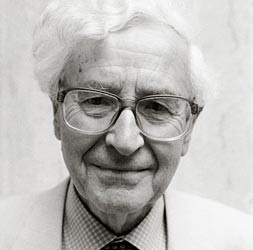 Anthony Hewish was born in Fowey, Cornwall, in 1924, and attended King’s College, Taunton. He went to Cambridge in 1942, but due to the war from 1943 he worked with Martin Ryle on radar counter-measures. Returning to Cambridge in 1946 he graduated in 1948 and joined Ryle’s research team at the Cavendish Laboratory, gaining a PhD in 1952, and helped construct Ryle’s first antennas using aperture synthesis. He became a Research Fellow at Gonville and Caius College, and in 1961 transferred to Churchill as Director of Physics. He was University Lecturer from 1961–69, Reader between 1969–71 and Professor of Radio Astronomy from 1971 until he retired in 1989. He is now Professor Emeritus at Cambrige University. When Ryle fell ill in 1977 Hewish took over the radio astronomy group and was head of the Mullard Radio Astronomy Observatory (MRAO) from 1982–88.

Hewish’s Nobel work began in the early-mid 1960s. The first two radio ‘stars’ had just been discovered and Hewish observed the apparent scintillations of radio sources due to their radiation impinging upon plasma. In other words, a star’s ‘twinkle’ is caused by interference from plasma clouds in the ionosphere. The rate of twinkle can be used to measure the clouds. This not only gave the answer to a well-known nursery rhyme, but allowed the measurement of solar winds and other cosmic weather patterns, as well as improving radio astronomy generally.

To build on this advance, Hewish proposed the Interplanetary Scintillation Array, a large radio telescope at the MRAO. Work was finished in 1967 and a survey of all observable scintillating sources began in July. “Jocelyn Bell joined the project as a graduate student in 1965, helping the construction and then analysing the charts of the sky survey,” Hewish recalls. “She was quick to spot the variability of one scintillating source which I thought might be a radio flare star, but more detailed observations revealed the pulsed nature of the signal.”

The paper announcing the discovery of the first pulsar had five authors, Hewish’s name being listed first, Bell’s second. But the Royal Swedish Academy of Sciences decided that the physics prize should be given to Ryle and Hewish for their work in radio-astronomy as a whole, with particular mention of Ryle’s work on aperture-synthesis, and Hewish’s on the discovery of pulsars. As well as the Nobel Prize, Hewish has several international awards, was made a Fellow of the Royal Society in 1968, and was awarded the Eddington Medal of the Royal Astronomical Society in 1969. He married in 1950 and has a son and a daughter.