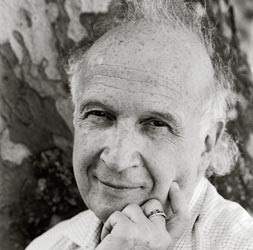 Roald Hoffmann, named after the Norwegian explorer Amundsen, received the 1981 award for his own explorations into the nature of chemical reactions. He shared the chemistry prize with Kenichi Fukui (1918–98) of Japan for their independent work. Their aim was to anticipate the course of chemical reactions in theory, and to simplify the theoretical models to make them more generally applicable for experimental researchers. Fukui showed that certain properties of the orbitals in which electrons moved had great significance for the chemical reactivity of molecules. Hoffmann derived a similar account of the factors governing chemical reactions, what came to be called the theory of conservation of orbital symmetry. This first major theoretical work was carried out in 1965 in collaboration with that year’s Nobel laureate Robert Woodward (1917–79) at Harvard.

Hoffmann was born in Zloczów, Poland (now Ukraine) in 1937 as Roald Safran – Hoffmann is the surname of his stepfather. Having survived the Holocaust, hiding in an attic, he and his mother moved after the war to Krakow, where Roald started school and his mother remarried (his father having been killed in an escape attempt from a Nazi labor camp, having already smuggled his wife and child out). In early 1946, the family moved to Czechoslovakia, then Austria and Germany, and finally to the US in 1949, where Roald enrolled at the prestigious Stuyvesant High School in New York. He graduated in 1955, winning a Westinghouse science talent search scholarship, which helped him attend Columbia University (Columbia College) where he gained a BA in 1958, followed by an MA (1960) and Ph.D. (1962), both from Harvard.

He remained at Harvard, collaborating with Woodward on a problem in the synthesis of vitamin B12. An experiment hadn’t gone as planned, and Hoffmann and Woodward discovered that many reactions involving the formation or breaking of rings of atoms take courses that depend on an identifiable symmetry in the mathematical descriptions of the molecular orbitals of the reactants. Their theory led to the Woodward-Hoffmann rules for elucidating reaction mechanisms. In 1965 Hoffmann moved to Cornell University where he has remained since. He is Frank H. T. Rhodes Professor, Emeritus at Cornell University. His research interests are in the electronic structure of stable and unstable molecules, and of transition states in reactions, and the structure and reactivity of inorganic and organometallic molecules.

Hoffmann is also a respected poet (publishing five collections) and playwright – co-authoring Oxygen with Carl Djerassi, and a play on his own, “Should’ve.”. Above all, he says, he is “a teacher and proud of it”. He has worked abroad, in Russia and Sweden, where he met Eva Börjesson. They married in 1960 and have two children.

For further information on Roald Hoffmann’s writings and activities, see his website, www.roaldhoffmann.com. 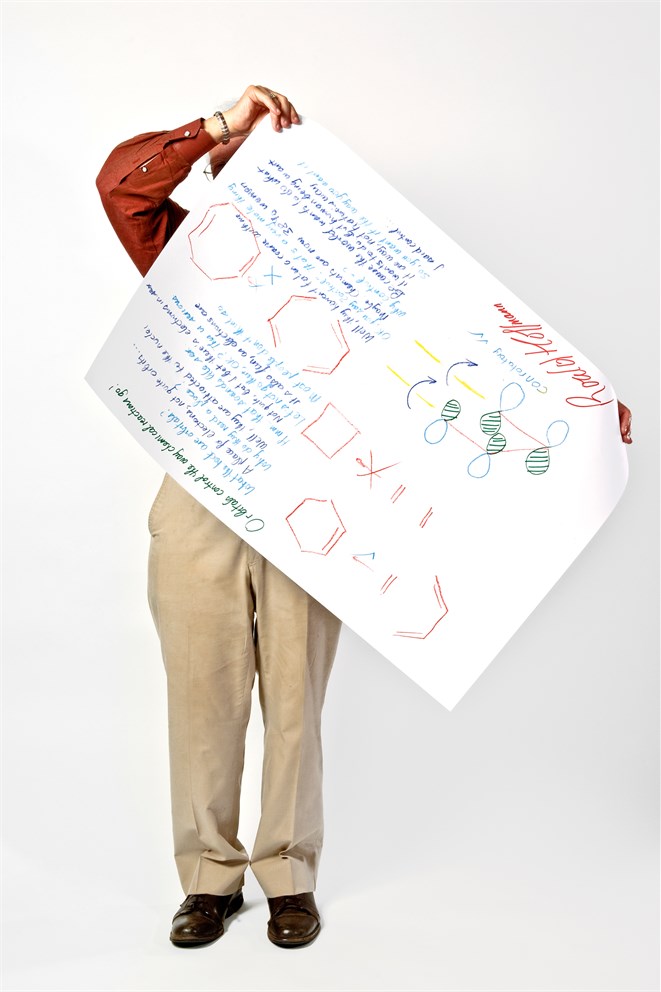 This man is really something! First, he gives me a little lecture about men and women, noting that women tend to wear jewellery. He is diff erent, telling me that some of his jewellery is Spanish, and some is Native American. Then, he tells an anecdote about Ithaca and Nabokov, and from there straight on to the superior spirituality of women. Time for the drawing! Hoff mann chooses his colours carefully. He starts with a chemical design and then suddenly decides to write a poem linking his thoughts about gender relations and chemistry, which he entitles “Sex and Orbitals.” Unfortunately, the poem ends because the paper is full.

A Scientific Dialogue
by Adam Smith

The statement in green at the top right, “Orbitals control the way chemical reactions go!” sums up what Roald Hoffman has been working on for most of his life, and the discoveries for which he and Kenichi Fukui were awarded the Nobel Prize. The drawings illustrate two aspects of this work. At bottom left is a picture of four carbon atoms with their electron orbitals undergoing what is called an electrocyclic ring-closure reaction. Examination of those molecular orbitals shows that the reaction proceeds in a ‘conrotatory’ direction, with the end groups turning in the same direction, as Hoffman has indicated. And the three reaction schemes shown in red use what Hoffman calls a “primitive visual vocabulary”, ticks and crosses, to illustrate which cycloaddition reactions are allowed or disallowed by orbital symmetry rules. So the formation of hexagonal cyclohexene, top left, is allowed, but the other two reactions are impossible.

This is demanding stuff. “Our basic problem,” says Roald Hoffman, “is that we have got what seems a complicated subject, electrons in molecules, and so one way to humanise it is to put it in a dialogue, and make that dialogue as conversational as it can be.” So Hoffman has imagined a person looking at the diagrams, and reading the statement in green, and thinking ‘What the heck are orbitals?’ So that’s where the first question comes from. The scientist, Hoffman, answers that and the dialogue continues, with the viewer’s comments in light blue and Hoffman’s answers in dark blue. “One of my messages,” says Hoffman, “is science is fun.”

Behind each of those dark blue answers however, particularly the first one, there is quite a bit of depth. “A place for electrons, not quite orbits…” refers to the fact that wave functions for electrons are not like defined planetary orbits, but should instead be interpreted in a probabilistic way, suggesting where, on average, one finds electrons. Towards the end, the dialogue turns to the question of women in science, with Hoffman quoting the figure that 38% of Chemistry PhD recipients in the United States are women. “This is a sea change in the last thirty years, “ remarks Hoffman, “and something the profession can be very proud of. We’ve come a long way from Marie Curie.”