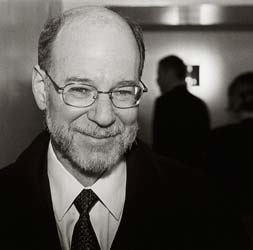 H(oward) Robert Horvitz, with Sydney Brenner and John Sulston, UK, received the Nobel Prize in Physiology or Medicine for their discoveries about how genes regulate organ development via programmed cell death, or apoptosis.

He was born in Chicago in 1947, the son of fi rst generation Jewish immigrants, and was in the top stream in all his classes at the East Prairie Grammar School. His mother, a science teacher, encouraged his experiments, even when his ninth grade project involved breeding fruit fl ies in the bathroom. At high school he fared well, but had no clear idea about where he wanted to go to college or what he wanted to study. More by accident than design, therefore, he ended up at MIT. He received two degrees, in mathematics and economics, while also studying computer science and psychology. During the summer he worked for IBM. In his senior year, he also took courses in biology, genetics and neurobiology, and entered Harvard in 1968 to study biology. With such a departure from maths, he struggled at first, but was helped by fellow student Patricia Foster. They became a couple in 1970, and lived together for 13 years. Horvitz received a BA in 1972 and a PhD in 1974, and applied to join Sydney Brenner’s laboratory in Cambridge, England, to study neurobiology using nematode worms. Funded by the Muscular Dystrophy Association – and having crammed three crash courses in neurobiology into one summer – he and Pat arrived in November 1974.

Mindful of his MDA funding, Horvitz began by studying the worms’ musculature, and with John Sulston he soon began investigating muscle cell lineage and then cell lineage in general, which led to his prizewinning work on programmed cell death, a process that is essential for normal development in all animals – for example by killing off webbing tissue between digits during foetal growth. Horvitz continued his research after he returned to Boston in 1978 to set up a new laboratory at MIT. In 1986 he reported the fi rst two cell-killing genes, ced-3 and ced-4, and in 1992, ced-9, which can block the process. The nematode genes have human counterparts, making research on microscopic worms relevant to human medicine, concerning neurological disorders, cancer and many other diseases.

Horvitz is an active member of the Hereditary Disease Foundation, has served on several public bodies involving biology and genetics, and has advised the US National Cancer Institute, human genome research projects, and the Tropical Disease Program of the WHO. He is now married to Martha Constantine-Paton, a professor at MIT. They have two sons from Martha’s previous marriage, and a daughter, Alexandra. 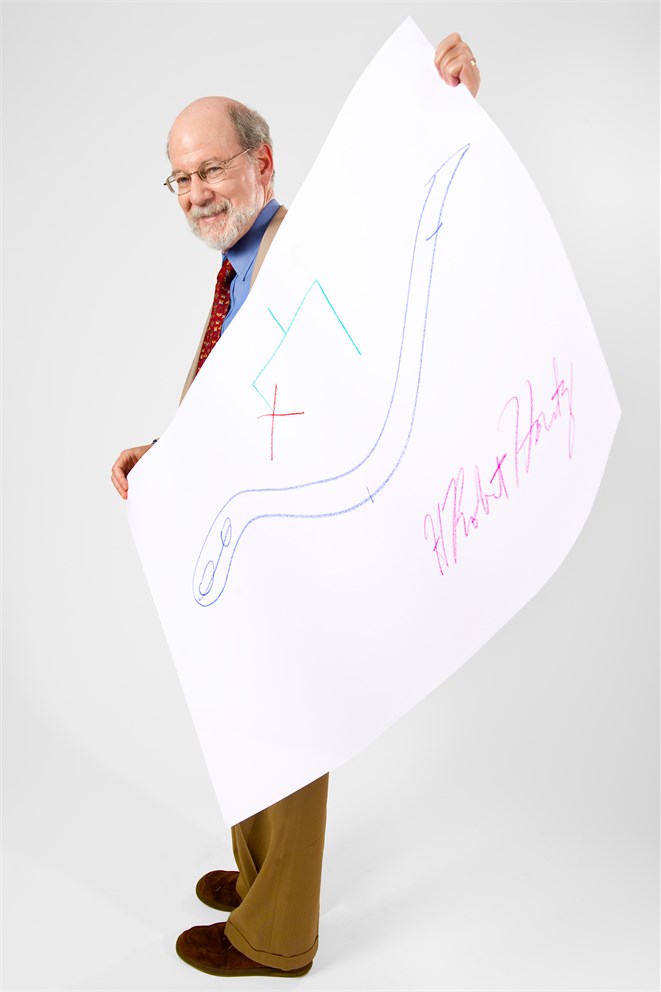 The animal that stretches all the way across Robert Horvitzʼ drawing, is not
a snake, but a dramatically magnifi ed C. elegans-worm, one of the preferred
“pets” of genetics. Horvitz won his Nobel Prize for his work on apoptosis, the
programmed death of cells. The red cross on the left side of the graph above the
worm marks the death of a cell. “I have been criticised for putting that
death mark on the left side!” he says. The next time I meet Horvitz,
I will ask him why, because not even the internet knows the answer.

Life and Death in the Worm
by Adam Smith

This drawing shows a sketch of the microscopic nematode or roundworm called Caenorhabditis elegans, the organism studied by Robert Horvitz, Sydney Brenner and John Sulston, the three recipients of the 2002 Nobel Prize in Physiology or Medicine. Much easier to study than human beings, you can grow 10,000 of these almost transparent worms in a single Petri plate and go through a generation or more a week. These features make C. elegans a favourite organism for genetic analysis, and although the worm doesn’t seem much like a person, it turns out that many biological processes are highly conserved between C. elegans and human beings.

Above that drawing of the worm there is a branched diagram showing a very small part of the worm’s cell lineage, the series of cell divisions that generate the organism. Here one cell is seen to divide to make two. The cell on the right, without the “X”, survives, but on the left that big, red “X” indicates that this particular cell dies, an occurrence of ‘programmed cell death’. Programmed cell death, the process for which Horvitz identified key controlling genes, essentially refers to a process of cellular suicide, whereby cells are generated during the normal course of animal development and then die.

Something of the order of 13% of the cells that are generated in C. elegans die this way, and the fact that cells are made only to die seems terribly counter-intuitive. But, as Horvitz reminds us, “we have to remember that organisms haven’t been designed, despite what some people might claim, but rather they have evolved. So the way the animal has developed is by a process that’s the fundamental process of evolution, which is one of duplication and modification. It has duplicated cell lineages and then modified them to fit the biological needs…it didn’t have to be that way, but it happened to work.”

For the observant student, and to satisfy Volker Steger’s curiosity (see his comments on Horvitz’s portrait) Horvitz mentions that he should in fact have put the “X” on the right. When drawing these lineage diagrams depicting cell divisions, convention dictates that anterior-posterior divisions are always depicted with anterior to the left. However, developmentally, all of the cells that die during anterior-posterior divisions are posterior cells. So the “X” should more properly have been on the right side, indicating the demise of the posterior cell.