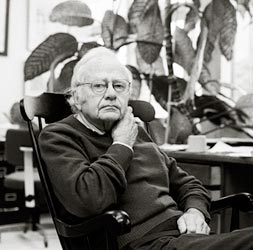 David Hubel was born in Windsor, Ontario, of American parents, and was brought up in Montreal from the age of 3. He graduated from McGill University in 1947, with a BSc in Mathematics and Physics, and then went on to McGill Medical School, where he received his M.D. in 1951. He did a rotating internship at the Montreal General Hospital followed by a year’s residency in Neurology and a year in clinical neurophysiology, at the Montreal Neurological Institute. After a final year of Neurology residency at the Johns Hopkins Hospital, Dr. Hubel entered the U.S. Army and spent three years at the Walter Reed Army Institute of Research where he began research on central-nervous mechanisms of Vision. In 1958, he began collaboration with Torsten Wiesel, first at Johns Hopkins and then at Harvard Medical School, where he has been ever since. In 1981, he shared the Nobel Prize in Physiology or Medicine with Torsten Wiesel and Roger Sperry. From 1982-2000, Dr. Hubel was John Franklin Enders University Professor of Neurobiology in the Department of Neurobiology. He is now Research Professor of Neurobiology and is currently active at Harvard Medical School in full-time research and teaching. For the past four years, he has taught Freshman Seminars in neurobiology at Harvard University.

His research has been done in collaboration, with Torsten Wiesel from 1958 to 1982 and with Margaret Livingstone from 1982 to 1995. Since then, he has continued working in the Department of Neurobiology, by himself and with post-doctoral fellows and graduate students. His main interest has been in examining how the brain handles the information it receives from the eyes, and the ways in which brain circuits can be modified postnatally by visual experience. The studies have involved recording electrical nerve signals in cats and monkeys. The work on postnatal development has led to a means of preventing one of the most common forms of human blindness.