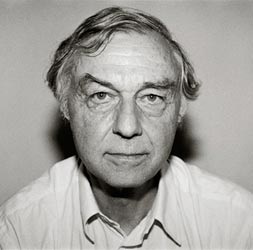 Robert Huber, Hartmut Michel from the Max-Planck-Institute of Biochemistry in Martinsried (MPIB) and the Max-Planck-Institute of Biophysics in Frankfurt am Main and their fellow German, Johann Deisenhofer, based in the US, received the Nobel Prize in 1988 for unravelling the full details of how a membrane-bound protein is built up. Most schoolchildren know that plants use the energy of light to build organic substances by a process called photosynthesis but don’t always appreciate that this is, in effect, how the most basic foodstuff in the world’s food chain is created. The energy for life processes is then produced largely in the combustion of the organic substances by the oxygen in the air in cellular respiration; simply put, oxygen in the air allows bodies to burn calories and this oxygen is produced by plants through photosynthesis.

The conversion of energy in photosynthesis and cellular respiration takes place through transport of electrons via a series of proteins, which are bound in special membranes. These proteins are difficult to obtain in a crystalline form but in 1982 Michel succeeded with a bacterial photosynthetic reaction centre, allowing him, along with Deisenhofer and Huber, to study its three-dimensional structure at atomic resolution. It was published in 1985 displaying the most complex protein cofactor crystal structure analysed at that time.

Robert Huber was born in Munich in 1937 and had a younger sister. He entered the Karlsgymnasium in 1947 with a sketchy education due to the war but was fascinated by chemistry and read all the textbooks he could get. In 1956 he moved to the Technische Hochschule (now Technical University of Munich, TUM) and earned a Chemistry degree in 1960. He went on to study crystallography under W. Hoppe, achieving his PhD in 1963 and deciphering together with P. Karlson (LMU Munich), the molecular structure of ecdysone, the insect moulting hormone, and its relationship to mammalian steroid hormones. In 1972 he was offered a professorship at the University of Basel, Switzerland and the position of director at the newly founded Max Planck Institute of Biochemistry (MPIB) in Martinsried which he accepted, but he remained associated with the TUM as professor. At the MPIB, Huber’s team studied proteins, often in collaboration with academia and industry elsewhere with a focus on proteins of medical interest and targets for drug development, especially proteolytic enzymes, and use in plant protection. They discovered the role of flexibility for protein structure and function. They also developed methods that are used in many laboratories to quantify the protein’s structure through crystallography. He co-founded two Biotech companies , PROTEROS offering services in structural biology and SUPPREMOL developing a new therapeutic protein modulating the immune response in autoimmune diseases. He holds honorary professorships and doctorates of international universities, and was editor of the Journal of Molecular Biology for many years.

After his retirement in 2005, he has taken up posts at Cardiff University, UK and at the Universität Duisburg-Essen. He is emeritus group leader ‘Structure Research’ at the MPIB and Emeritus of Excellence at the TUM in Munich.

Huber has four children with his former wife Christa. He is married to Brigitte Doleschel. 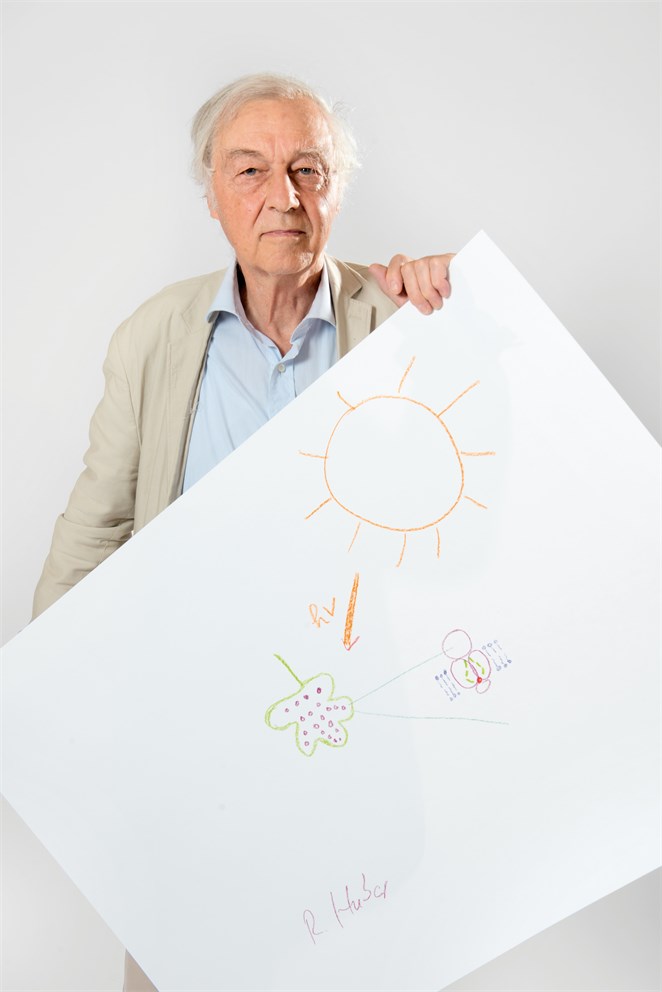 Robert Huber with his "Sketch of Science"

I have always been intrigued by x-ray crystallography, the technique Huber used to decipher the structure of chlorophyll, the molecule that can make turn sunrays into chemical energy. „Just who invented this?“ I ask him. „Max von Laue in Munich“ he says.“You should know that!“ He is right, twice.

“So, it’s a wonderful example of evolution!” Says Robert Huber, referring to way that the basic components of the biological photocell that he elucidated, and has drawn at the bottom right of his sketch, have been preserved throughout the long development from primitive organisms to higher plants. “You find the essential components in the primitive organisms kept during evolution and modified such that there are additional regulatory possibilities.”

Huber and his co-Laureates Hartmut Michel and Hans Deisenhofer were awarded the Nobel Prize in 1988 for unravelling the structure of a relatively primitive version of that photocell, from a photosynthetic bacterium. Here he has depicted the reaction centre, where sunlight is converted into electric current in the first step of photosynthesis. The spheres represent the subunits of the protein that surrounds the chlorophylls, which are shown in green, and this arrangement of the two middle subunits holding the chlorophylls was later found to be almost exactly the same in the photosynthetic apparatus of higher plants. At the top of the picture, photons from the sun, represented by Planck’s expression for the energy of a photon, E=hV, are seen to be arriving at photocells arrayed across the leaf of a green plant.

The bacterial photosynthetic reaction centre, although primitive, itself displays signs of having evolved from something still more basic. Although it has two chlorophyll branches, as seen in the sketch, only one of these branches is actually used. Presumably the photocell was once a functional dimer, with two active branches, but it appears to have become so good at converting photons into current that, by this stage in evolution, one branch had become sufficient.

Photosynthesis is not a particularly energy efficient process. It doesn’t need to be since sunlight is normally so abundant! Instead biology focuses on optimising the quantum efficiency of the process; that is, one photon generates one electron. Thus the components forming the individual photocells need to work optimally and, presumably for this reason, are strikingly short-lived. Under optimal illumination, the lifetime of those elements shown here is only a few hours, after which they have to be replaced, leaving behind debris which needs to be removed. That waste disposal system has, for many years, been Huber’s main interest. As he says, “Nature cares about regulation, you see, precise regulation. Energy, there is enough around!”