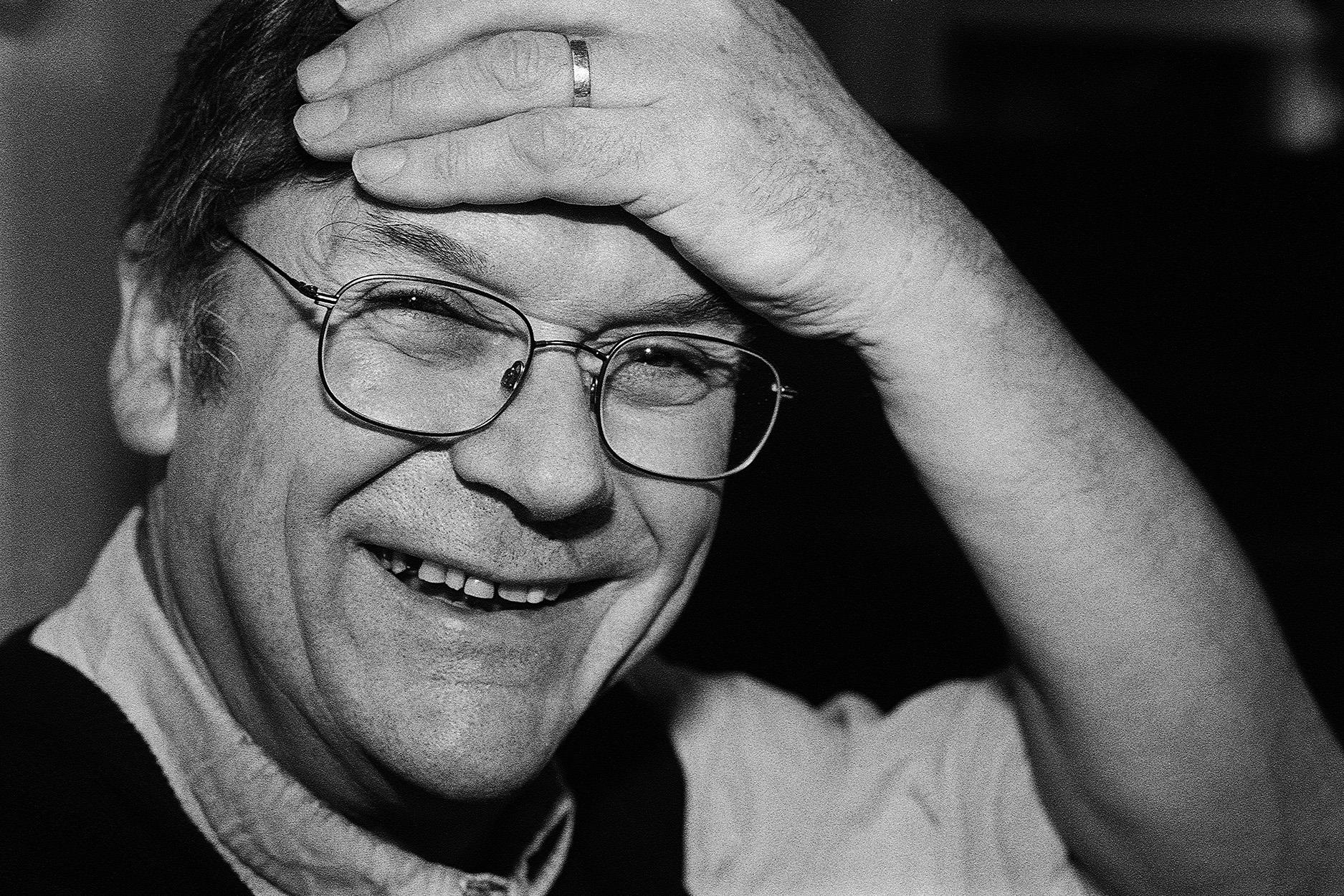 An adult human comprises roughly 100 000 billion cells, all originating through division from a single fertilised egg cell. To do this, cells grow and duplicate their chromosomes before dividing into two cells. The Nobel Prize in Physiology or Medicine for 2001 was divided evenly between Tim Hunt and Paul Nurse, both of the Imperial Cancer Research Fund (ICRF), UK, and the American Lee Hartwell for their “Discoveries of Key Regulators of the Cell Cycle”. This was an important breakthrough, as defects in cell cycle control can lead to the type of chromosome alterations seen in cancer cells. In the early 1980s Hunt discoved the first cyclin molecules, so named because the levels of these proteins oscillate during the cell cycle owing to selective destruction at the end of mitosis. The cyclins bind to the CDK (cyclin dependent kinase) molecules, turning on the CDK activity and selecting the proteins to be phosphorylated. In fact, Tim Hunt discovered the cyclins because of their abrupt disappearance at the end of each cell division, a crucial mechanism for cell cycle control which, at the time, was completely unanticipated; indeed, would have been considered impossible!

Tim Hunt was born in 1943 at Neston in the Wirral, near Liverpool, but grew up in Oxford, where his father worked at the Bodleian Library. His education began oddly with latin lessons from a governess, and the infants department of the Oxford High School for Girls before moving to the Dragon School, where he first became fascinated by biology. At 14, he entered Magdalen College School, where his interest in science grew – he even dissected his brother’s pet rabbit when it died – and attended evening lectures by university scientists. In 1961 Tim entered Clare College, Cambridge to read natural sciences. He joined the Department of Biochemistry in 1964, working on the control of translation of the mRNA for haemoglobin. In 1966, he visited Irving London at the Albert Einstein College of Medicine in New York for further studies, and joined him full time after gaining his PhD in 1968.

Tim returned to Cambridge and continued to work on translational control throughout the 1970s, and began teaching summer courses at the Marine Biological Laboratory, Woods Hole, Massachusetts in 1977, looking at changes in protein synthesis in sea urchin and clam eggs after fertilisation. In 1979, he helped Joan Ruderman and Eric Rosenthal with experiments on the translational control of maternal mRNA in clam eggs, where two of the major mRNAs concerned later turned out to be the A and B-type cyclins. By 1982, Tim had almost exhausted the potential of sea urchin eggs, but it was then that he performed the ridiculously simple experiment that led to the discovery of cyclins and their degradation. In 1990, Hunt joined ICRF (now The Francis Crick Institute) in London. He became a fellow of the Royal Society in 1991 and a foreign associate of the US National Academy of Sciences in 1999. He was knighted in 2006. He enjoys cooking and making up problems for Molecular Biology of the Cell with his friend John Wilson. In 2016, he and his wife Mary Collins moved to OIST in Okinawa, where Mary is Provost. 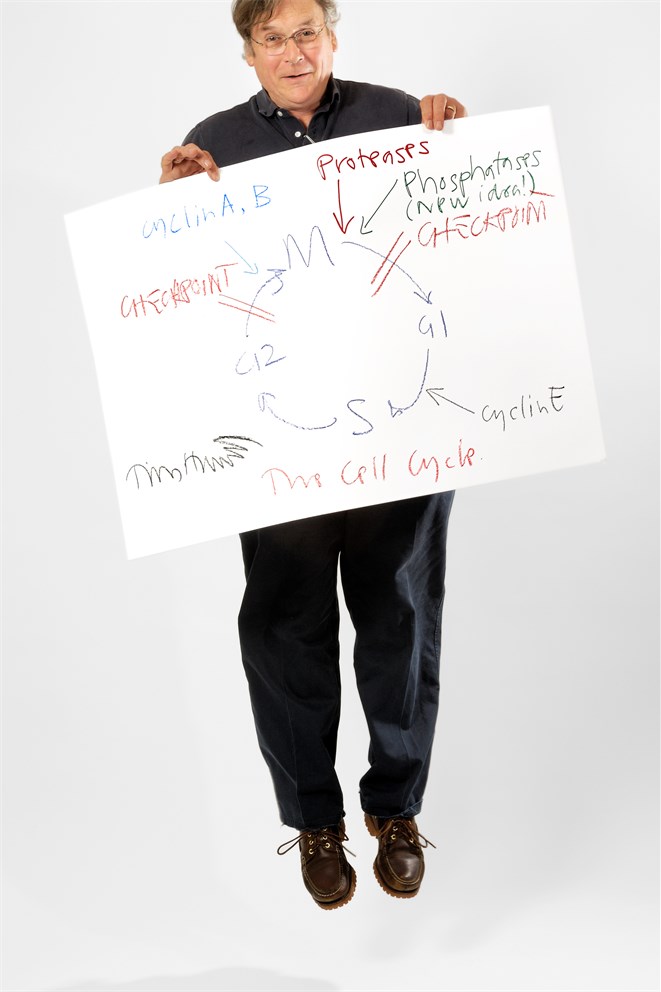 This is not just a Nobel Laureate, but a knight, too. Sir Tim is a very nice,
likeable gentleman. He just loves this photo project, posing, and even
jumping with his drawing! Later he does the unexpected: he photographs
me using a small camera he pulls out of his coat pocket. The next day, I
receive his pictures in my mail, signed, “Best regards, Tim. This is the bait,
now send me my pictures!” He got them quickly after that! Looking back Iʼm
amazed how scientific and precise his drawing turned out to be.

“Aha, the cell cycle!”, exclaims Tim Hunt. “What is the cell cycle? Well I like a sort of simple definition, which is that the cell cycle is a series of events, or you might call them processes, which cells in our bodies have to go through in order to reproduce themselves. ”The cell cycle is conventionally divided into four phases, of which the important ones have been placed by Hunt at the top and bottom. Mitosis, at the top, is the process when the cell actually divides into two and S-phase (which stands for ‘DNA Synthesis phase’), at the bottom, is when the chromosomes are replicated. And in between those two important events are G1 and G2, standing simply for ‘Gap 1’ and ‘Gap 2’.

The checkpoints, a concept introduced by Hunt’s co-Laureate Leland Hartwell, are places in the cell cycle where the cell decides whether or not to go on. So, for example, the first checkpoint on the top left side of the diagram is where the cell checks to make sure that the chromosomes have been fully replicated and that they don’t have any damage, before going into mitosis. As for the cyclins, the proteins which Hunt discovered, he remarks that “it’s sort of hard to explain that you won an important scientific prize for discovering something that went away.” But that’s how they were discovered. Hunt analysed the proteins made by sea urchin eggs after they were fertilised, up to and including the time when they first divided. Taking out samples every ten minutes, he noticed that one of the proteins suddenly faded away when the cells divided. “That struck me as very extraordinary,” he recalls.

The cyclins he uncovered turned out to be key regulators of the cell cycle that combine with another regulator protein discovered by Hunt’s other co-Laureate, Paul Nurse, called CDK1 (cyclin-dependent kinase 1). That word “dependent” means that without the cyclins this kinase won’t work, so when the cyclins are degraded, the kinase turns off. “I mean it’s interesting that you’d think that something as fundamental as cell division would all have been figured out long ago,” says Hunt, “but actually there’s still an awful lot to work out. Each of those arrows is an adventure, and that’s the amazing thing, how long it takes to figure stuff