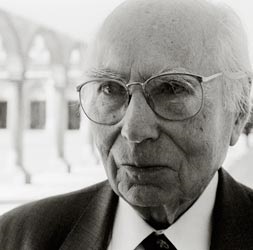 Born at Hampstead, London, on November 22, 1917 into a family of scientists and men of letters (both the biologist, Sir Julian Huxley, and the writer Aldous Huxley were elder half-brothers of his). After ten years at the University College School and Westminster School, he attended Trinity College, Cambridge, where he originally intended to study Physics and Chemistry. "An old friend who was already working there" persuaded him to study Physiology, which caught his imagination and soon put him in contact with Allan L. Hodgkin. In 1939 the two scientists for the first time succeeded in deriving and plotting electric action potentials of nerve fibres. During the war Huxley at first worked at the Marine Biological Laboratory at Plymouth before holding a position in the Anti-Aircraft Command and later in the Admiralty. Elected to a research fellowship at Trinity College in 1941, which - due to the war - he was not able to pursue until 1946, together with a teaching appointment in the Department of Physiology.

After eight years in leading positions there he became head of the Department of Physiology of University College, London, and was appointed to a Royal Society Research professorship there in 1969. In the early post-war years he and Hodgkin developed innovative biophysical measuring techniques which permitted the recording of ion exchange in nerve-cell membranes during excitation and correlating it with changes in the electrical properties of the membranes in question. The two scientists realised that nerve membranes are "selectively" permeable to ions, i.e. that they allow only certain ions to pass.

In this way they were also able to prove that nerve action potentials are initiated and sustained by ion shifts in the membranes. Huxley also developed a special interference microscope for the study of striation patterns in isolated muscle fibres, an ultra-microtome for electron-microscope sections, and a micromanipulator. In recognition of their pioneering work, the two scientists, along with Sir John Eccles, were awarded the Nobel Prize for Medicine in 1963.