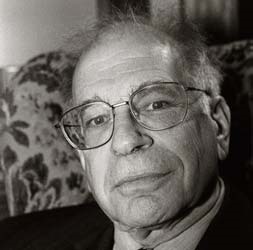 Although he received a prize in economics, Daniel Kahneman’s background was in psychology, and it was through this route that he arrived at his award winning theory. Indeed, he admits that any knowledge of economics in his works came from his collaborators, notably Richard Thaler and Jack Knetsch.

Kahneman was born in Tel Aviv in 1934 but his parents lived in Paris – Daniel was barely six when the Germans invaded France in 1940. His interest in psychology he puts down to a combination of the gossiping of his Jewish mother and a curious incident in which he saw the human side of a feared SS offi cer. “My mother was right”, he recalls. “People were endlessly complicated and interesting.” The family evaded the Nazis throughout the war. Although his father died of diabetes in 1944, Daniel, his mother and sister survived to move to Palestine.

He received his BSc in mathematics and psychology from the Hebrew University in Jerusalem in 1954, after which he served in the Israeli Defense Force’s psychology department, testing offi cer candidates for leadership qualities. The results, he admits, seemed so inconclusive that he coined the term ‘the illusion of validity’. He returned to his studies in 1956 and in 1958 gained a scholarship to the University of California, Berkeley, where he received his PhD in 1961. He then taught psychology at the Hebrew University, Jerusalem, rising to professor in 1970. From 2000 he held a fellowship at the university’s Centre for Rationality.

From 1968–69, while teaching a graduate seminar on the applications of psychology to real-world problems, Kahneman linked up with Amos Tversky, beginning a close partnership that lasted until Tversky’s death in 1996. The duo conceived the notions of ‘loss aversion’ – the fact that the loss of a set amount of money could be more meaningful than gaining the same amount – and ‘value theory’, whereby people would be more inclined to accept a sure gain than gamble on a slightly larger gain, but would rather gamble on a potential loss than accept a smaller but certain loss. Kahneman’s research also showed that people are often incapable of analysing complex decision situations when the future is uncertain. Instead, they rely on rule-of-thumb, with few people evaluating their underlying probability. This work led to a new branch of economics, which they dubbed ‘prospect theory’, in 1979. Sadly, Amos Tversky died in 1996, long before the announcement of the award.

Kahneman has worked with several others, at Berkeley, California, in 1986 and Princeton in 1993, where he has remained ever since. Kahneman has been married twice, to Irah in the 1950s and in 1978 to English psychologist Anne Treisman. He has several children and grandchildren.