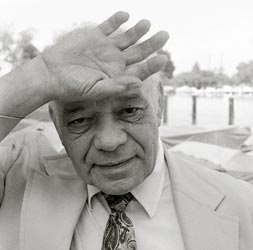 Jerome Karle was a crystallographer who, with Herbert Hauptman, received the 1985 chemistry prize for their system for deducing the molecular structure of chemical compounds from the patterns formed when X-rays are diffracted by the crystals of the compounds. X-rays have so short a wavelength that they will detect individual atoms. X-rays striking a crystal are deflected in different directions, and varying intensity. Hauptman and Karle devised equations to translate the information directly into a three-dimensional structural ‘map’. The duo first published their basic equation in 1949, but it was largely ignored. Gradually, however, their system was used to determine the structure of hormones, vitamins, and antibiotics. Previously, it had taken two years to deduce the structure of a simple biological molecule; by the 1980s, using computers to perform the calculations needed, it could be done in about two days.

Karle was born in New York City in 1918. He attended New York City public schools and was fast-tracked several years ahead of his age group. In 1933 he entered the City College of New York, where he was a classmate of Hauptman, both graduating in 1937, when Karle went on to Harvard to study biology, gaining an MA in 1938. He then joined the New York State Health Department, where he worked on the initial calculations of how much fluorine should be added to public drinking water. After saving enough money to fund his graduate studies, he entered the Chemistry Department of the University of Michigan in 1940. On his first day he met fellow student Isabella Lugoski. They married in 1942 and have three daughters.

Karle completed his thesis in 1943 (his PhD was awarded in 1944), and he (and later Isabella) joined the Manhattan Project at the University of Chicago. In 1944, they returned to Michigan, Isabella as an instructor while Jerome joined the Naval Research Laboratory (becoming in 1967 its chief research scientist), working on electron diffraction. In 1946 Isabella joined him and the couple continued their work in Washington. There they were joined by Karle’s collegemate Hauptman, and they turned their diffraction studies to the examination of crystal structures. The Karles continued their crystallographic studies into the 1970s, working with Stephen Brenner who performed the number-crunching computer programming work.

Karle has also taught at the University of Maryland, and served as president of the International Union of Crystallography (1981–84). In later years, Karle took a keen interest in the promotion of education and humanitarian/environmental care, and his work concentrated more on biological processes. He and Isabella worked in Washington and regularly visited seminars in Germany and Poland (both having Polish parents).
Jerome Karle passed away on 6 June 2013, at the age of 94.