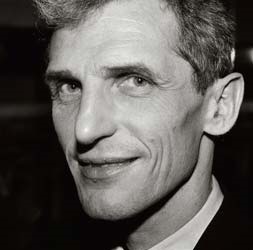 In 1924 the Indian physicist Satyendra Nath Bose made statistical calculations regarding photons, particles of light. Albert Einstein then generalized the result to atomic particles and predicted that if a gas of atoms was cooled sufficiently the atoms would gather in the lowest possible energy state and form what is now called a Bose-Einstein condensate. Seventy years later, in 1995, Carl Wieman and Eric Cornell succeeded in proving this theory in the USA, producing a pure Bose-Einstein condensate (BEC) of about 2,000 rubidium atoms cooled to a tiny fraction of a degree above absolute zero (–273°C).

Later that year Ketterle performed similar experiments with sodium atoms, producing larger condensates. Two years later, when merging two BECs, Ketterle observed interference patterns, which showed that the atoms in each BEC were entirely co-ordinated. He also produced a stream of ‘BEC drops’ that fell under the force of gravity, forming a primitive ‘laser beam’ of matter instead of light. For this the three men shared the 2001 physics prize. It is hoped BEC will prove useful in precision measurement and nanotechnology.

Ketterle was born in Heidelberg in 1957 and grew up in the nearby village (now city) of Eppelheim. The young Wolfgang’s early explorations of science started with Lego bricks, electricity kits, radios and some home chemistry experiments. He attended the Bunsengymnasium in Heidelberg where his science lessons, although unimaginative by today’s standards, kindled his interest, and were matched by “inspirational” lessons in mathematics. As a top student, Ketterle was invited to special summer schools in the Italian Alps. He has always been a keen athlete and could run a marathon in under three hours in his late fifties.

In 1976, he entered the University of Heidelberg to study physics, progressing after two years to the Technical University in Munich, where he gained his master’s diploma in 1982. In 1986 he earned a PhD in molecular spectroscopy at the Max Planck Institute in Garching, before conducting postdoctoral research on helium hydride, which he was the first to observe during his PhD studies. He then worked at the University of Heidelberg, working with Volkswagen on ways to make more efficient engines.

In 1990, Ketterle moved to the US to join David Pritchard’s group at MIT. He formally joined the faculty in 1993 and in 1998 became John D MacArthur Professor of Physics. He worked on superfluidity and in a 2005 experiment provided evidence for ‘high temperature’ superfluidity in a fermionic condensate. He does experimental research in atomic physics and laser spectroscopy and focuses on Bose-Einstein condensation in dilute atomic gases. In 2006, he was appointed associate director of the Research Laboratory of Electronics, and director of the Center for Ultracold Atoms.

Since 2011, Ketterle has been married to Michèle Plott. He has five children, three with Gabriele Ketterle, to whom he was married from 1985 to 2001.