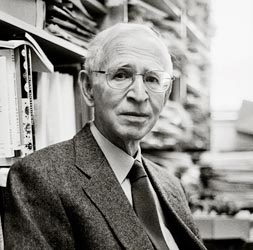 Aaron Klug was born in 1926 in Zelvas, Lithuania, but grew up in South Africa. He attended Durban High School “where the bright boys specialised in Latin, the not so bright in science and the rest managed with geography or the like” and read voraciously. A book called ‘Microbe Hunters’ by Paul de Kruif sparked his interest in medical research. At the University of Witwatersrand in Johannesburg, he took the pre-medical course and biochemistry, but moved to chemistry and then to physics and mathematics, ending up with a science degree. Now hooked on physics he went to the University of Cape Town where he was encouraged by Professor RW James, an X-ray crystallographer from the Bragg school at Manchester. After taking his MSc, Klug stayed on to work on the X-ray analysis of organic compounds, and developed a method of using molecular structure factors for solving crystal structures.

In 1949 Klug went to Trinity College, Cambridge, and joined the Cavendish Laboratory intending to work on some form of X-ray crystallography, but instead became a research student of DR Hartree, under whom he learned a fair amount of metallurgy, together with computing and solid state physics. After taking his PhD, Klug spent a year in the Colloid Science department in Cambridge, working with FJW Roughton on chemical reactions in blood.
This work gave him an interest in biological matter and he obtained a Nuffield Fellowship to Birkbeck College, London, in 1953. There he met Rosalind Franklin, who was working on the tobacco mosaic virus and, joined by Kenneth Holmes and John Finch, the team mapped the virus. Franklin died in 1958 and Klug became leader of the group which, joined by biochemist Reuben Leberman, moved in 1962 to the newly built MRC Laboratory of Molecular Biology in Cambridge, where Klug became Director from 1986–96. His group diversified to include work on the structure of DNA and RNA, establishing the crystal structure of transfer-RNA in 1974 and leading to an understanding of how DNA is packed in chromosomes. He continued as an emeritus scientist until 2012, when he retired from the Lab.

Klug used X-ray diffraction, microscopy and structural modelling to develop crystallographic electron microscopy in which two-dimensional images of crystals taken from different angles are combined to produce three-dimensional images of the target. It was for this work, and his structural elucidation of important nucleic acid-protein complexes, that he was awarded the Nobel Prize in Chemistry. Klug was elected a Fellow of the Royal Society in 1969 and became its President in 1995. He was knighted in 1988 and appointed to the Order of Merit in 1995, yet continued teaching at Peterhouse College, Cambridge. He married theatre director Liebe Bobrow in Cape Town before moving to England. They have two sons.