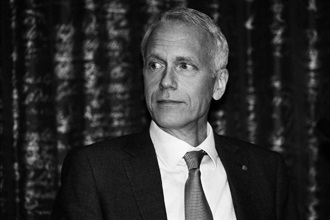 Robert Lefkowitz and Brian Kobilka were awarded the 2012 Nobel Prize in Chemistry for revealing the workings of an important family of receptors: G-protein–coupled receptors (GPCRs).
Every cell in your body is covered with GPCRs, tiny membrane proteins that enable it to sense its environment and allowing it to adapt to new conditions. The Kobilka laboratory has been investigating several aspects of GPCR biology. Their primary focus has been adrenergic receptors, which are GPCRs for adrenaline that form the interface between the sympathetic nervous system and the cardiovascular system, and play a critical role in the regulation of cardiovascular function.

Scientists knew that hormones such as adrenalin had powerful effects at a cellular level, and suspected that cell surfaces contained some kind of sensor for hormones, but for years their exact nature remained a mystery. In 1968 Lefkowitz attached a radioactive iodine isotope to various hormones, and used it to detect several receptors in the cell membrane. In the 1980s Brian Kobilka joined the team in the Lefkowitz lab tasked with isolating the gene that codes for the β-adrenergic receptor. They succeeded, and researchers realized that there was a whole family of GPCRs that look alike and function in a similar manner. Members of this large family mediate the senses of sight, smell and taste, and respond to most hormones and neurotransmitters, including adrenalin, histamine, dopamine and serotonin. In fact, about half of all medications use GPCRs, making it important to understand them.

This understanding took a great leap forward in 2011, when Kobilka – now heading up his own research team - captured an image of the β-adrenergic receptor at the exact moment that it is activated by a hormone on the outside of a cell and sends a signal to a G protein on the inside of the cell. This image, using x-ray crystallography, is the result of decades of research as GPCRs are notoriously difficult to work with. The team’s success paved the way for similar work to determine the molecular structure of several other GPCRs. Kobilka’s team, based at Stanford University School of Medicine in California, continues to research adrenergic, muscarinic and opioid receptors today.

Brian Kent Kobilka was born in 1955 to a family of bakers in Little Falls, Minnesota. He attended St Mary’s Roman Catholic school and the local high school before studying biology and chemistry at the University of Minnesota, Duluth and gaining his MD at Yale. He performed his residency in internal medicine at Barnes Jewish Hospital in St Louis, Missouri, before joining Robert Lefkowitz’s team at Duke University in Durham, North Carolina. In 1989 he moved to Stanford and was a Howard Hughes Medical Institute investigator from 1987-2003. Kobilka is the recipient of several honours, and joined the National Academy of Sciences in 2011. He is co-founder of ConfometRx, a biotechnology company focusing on GPCRs.

Brian Kobilka is married to physician Tong Sun Thian, whom he met in biology class at university, and who often works at his lab. They have two children, Jason and Megan. 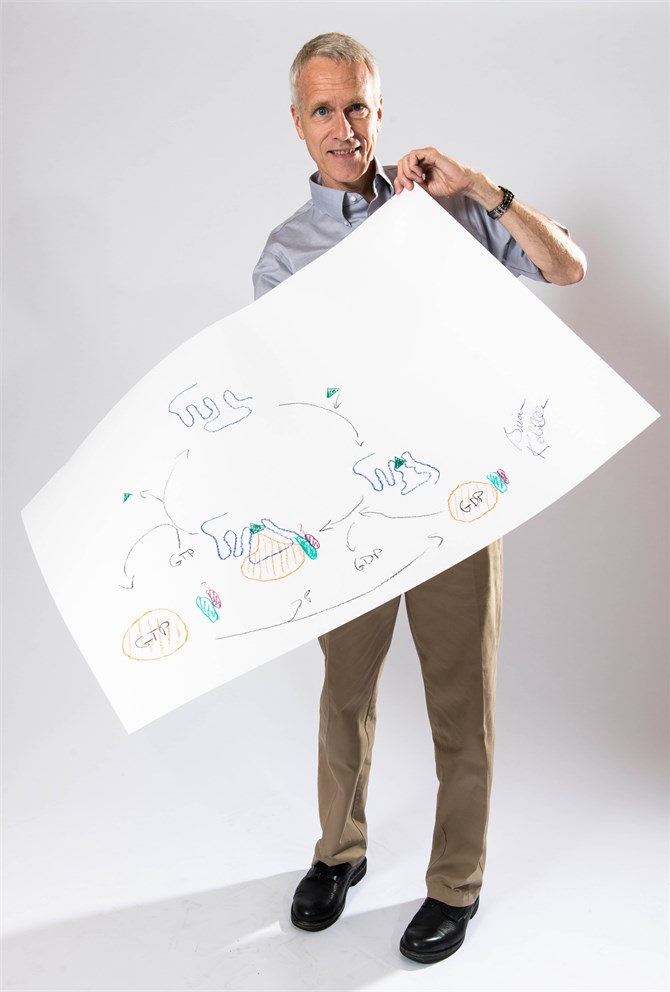 Brian Kobilka is so tall, that I have stand back a few steps to get his full figure into the frame. I also have to ask him to stand closer to the backdrop for the same reason...
He sketches with speed an precision, but his blue eyes easily outshine any crayon!