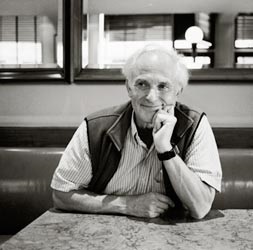 Sir Harold Kroto is an English chemist who, with Richard Smalley and Robert Curl Jr, received the 1996 chemistry prize for their joint discovery of fullerene carbon compounds. He was knighted earlier in his laureate year.

He was born Harold Walter Krotoschiner in Wisbech, Cambridgeshire, in 1939, to German parents who fled Berlin because his father was Jewish. The family soon moved to Lancashire where Harold was “the kid with the funny name” at Bolton School. In 1955 the family name was shortened to Kroto. Harold helped out at his father’s toy balloon factory, and as a child loved his Meccano set – both good proving grounds for a budding scientist. He also took a keen interest in his science, particularly chemistry lessons as well as art. It was one of his Chemistry teachers who recommended that he should go to Sheffield University, and he took a place there in 1958. Kroto played tennis for the university – ending up as president of the Athletics Council. He was also art editor of “Arrows” the student magazine for which he created the covers and posters and designed prize-winning book jackets. He got married, in 1963, to Margaret Hunter.

However, he still found time to study, earning a first class BSc (Hons) in 1961 and a PhD (1964). His doctoral research involved high-resolution electronic spectra of free radicals. Some preliminary unpublished work on carbon suboxide at that time initiated a general interest in linear molecules containing chains of carbon atoms and their dynamic behaviour. After postdoctoral research in Canada and the USA he joined the University of Sussex faculty in 1967, becoming a full professor in 1985, and a Royal Society Research Professor from 1991–2001. He continued his work on unstable molecules and with a colleague David Walton – who was an expert on polyynes – started a detailed study of carbon chains which subsequently led to a radioastronomy programme which uncovered the unexpected result that such molecules existed in interstellar space and also the gas ejected from carbon stars.

It was while he was visiting Richard Smalley’s lab at Rice University in Texas at the instigation of Robert Curl that he suddenly realised that Smalley’s ingenious laser vapourisation cluster beam apparatus might be able to simulate the carbon chemistry in the gas around carbon stars. The experiment he suggested, carried out together with graduate students Jim Heath, Sean O’Brien and Yuan Liu, in early September 1985, not only produced the expected carbon chains but also a totally unexpected hollow, spherical C60 molecule – 60 carbon atoms bonded together with the same 12 pentagon/20 hexagon pattern of the modern soccer ball. Kroto called the molecule buckminsterfullerene, or ‘buckyball’, after R Buckminster Fuller, who designed geodesic dome buildings as at the time the American architect’s ideas were instrumental at arriving at a possible structure. In 1995, Kroto set up the Vega Science Trust to create educational science films. He presently carries out research in Nanoscience. Kroto is a Fellow of the Royal Society and past (2002–2004) president of the Royal Society of Chemistry.

He has received several awards including honourary degrees. In 2004 he returned an honorary degree to the University of Exeter in protest at the closure of their chemistry department. The same year he took up a position at the Florida State University. He is a supporter of Amnesty International, the British Humanist Association, and says he is “an atheist (or free-thinker), a humanist and a humourist”. 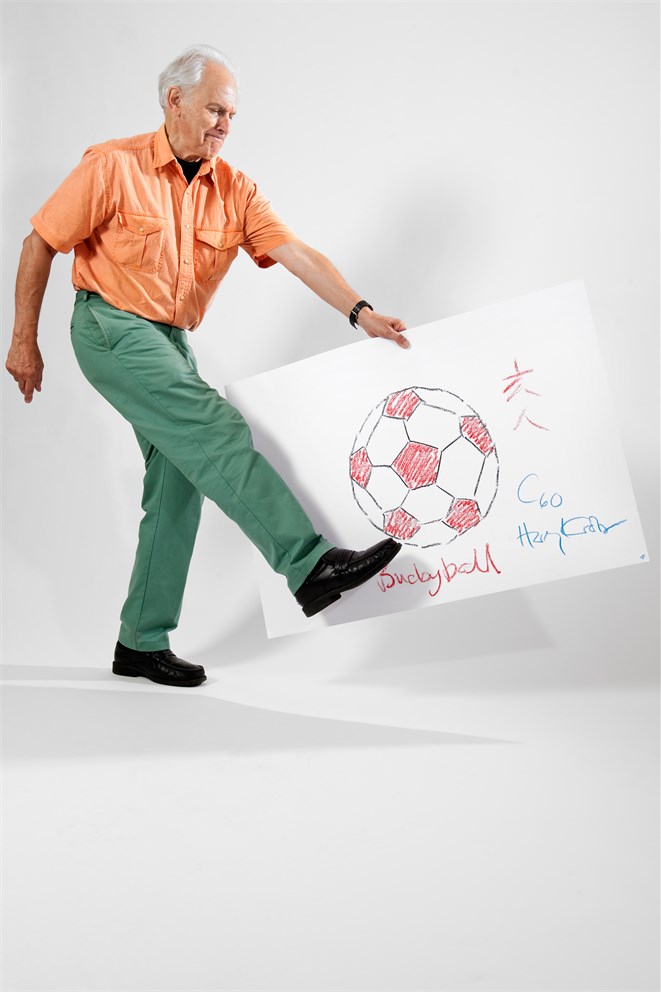 Carbon C-60 molecules look like a football, and this is one of the few
examples of an observation being scientifi cally correct at fi rst glance.
Harry Kroto draws a carbon football and signs it with Latin and Japanese
characters – all with the ease and precision of an experienced draftsman.
So, will he kick his buckyball for the photographer? Do I dare to ask him?
No need to ask...

“All children draw,” says Harry Kroto, “and unfortunately for a lot of children that ability somehow stops and they don’t draw, they don’t go on drawing. For me, I’ve got involved with graphic design, which is somewhere sort of halfway between art and science.”

The football pictured here depicts buckminsterfullerene, or the ‘buckyball’ (C60), the molecule Kroto discovered together with Robert Curl and Rick Smaller during just a few days of experimentation back in 1985. Following the observation using radio telescopes of molecules made of carbon chains in interstellar space, Kroto wanted to try to simulate the conditions found in stars to see whether they might generate such carbon chains. On a brief visit to Curl and Smalley, he took graphite, the stuff that fills your pencils, and vaporised it into carbon atoms with a laser, heating it to ten thousand degrees. Then the three researchers looked to see what form the atoms would reassemble themselves into.

To their great surprise, among the many products of the vaporisation and reassembly, they found that the cage-like structure drawn here was formed when 60 carbon atoms came together (think of the nucleus of a carbon atom sitting wherever the black lines join). Initially met with scepticism, their discovery took some years to be generally accepted, but in time led to a whole new field of fullerene chemistry and gave important hints into the processes governing molecular self-assembly.

“I think, yes, we were very fortunate to have such a beautiful discovery,” says Kroto, one “which everybody can empathise with. Not necessarily in the way that we did as scientists, but actually as a sporting object and also as an architectural structure. It turns out that it brings other people into the field, so it’s not just scientists who are interested. It’s actually a link to people in architecture, art and even in sport. And that is rather nice because I think we need to show that science can link, not just as a valuable thing for other people but something that can be intellectually stimulating.”

And in case you’re wondering, the symbols to right of the ball are the kanji characters “Kro-to”. In Japanese Kroto is short for expert or professional. “Shiro-to is the amateur, someone who doesn’t know very much,” notes Kroto, laughing. “So it’s very close, I could have been that way.”