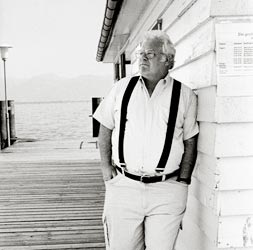 Robert Laughlin, with Horst Störmer, (Germany/USA) and Daniel Tsui (China/ USA) received the 1998 Nobel Prize in Physics for the discovery and explanation of the fractional quantum Hall effect. In 1879 Edwin Hall found that the electric current in a thin plate in a magnetic field is deflected, leading to a potential drop over the plate. In 1980 Klaus von Klitzing (Nobel Prize 1985) found that, while varying the strength of the magnetic field smoothly, the change in the potential drop occurred in jumps, thus exhibiting quantum properties.

Tsui and Störmer then found that the quantum changes occurred in fractional increments of the steps observed by Klitzing. It was now the ‘fractional quantum Hall effect’. In 1983 Laughlin offered an explanation of the phenomenon, that in a powerful magnetic field at low temperatures, electrons combine with the magnetic field quanta and condense into a new kind of quantum fluid. Adding just one electron will affect (excite) the fluid, creating a number of fractionally charged ‘quasiparticles’. These explained Störmer’s and Tsui’s results and all subsequent refinements. Robert Betts Laughlin was born in Visalia, California, in 1950. Introverted, but interested in technology, Robert made a working colour TV from a kit, taught himself how to blow glass to make chemistry plumbing and tried to make sodium metal but accidentally poured it over his right hand. Miraculously, his hand recovered fully. In 1968 he entered UC Berkely to study electrical engineering, but took quantum mechanics under Owen Chamberlain. His studies were disrupted by the Vietnam war. Anxiety at receiving his draft papers caused Laughlin to fail physics, but his degree in mathematics meant that he was assigned to a Pershing nuclear missile battery and sent not to Vietnam but to southern Germany.

In 1974 Laughlin entered MIT, where he concentrated on solid state physics, gaining a PhD in 1979 and joining the Theory Group at Bell Labs. There he worked with both Tsui and Störmer. Unfortunately, just as they began their studies of the quantum Hall effect in 1981, Laughlin’s contract expired. He moved to California, and joined Lawrence Livermore National Laboratory, a fi rm specialising in nuclear defence contracts. Within months he received news of Tsui and Störmer’s discovery of the fractional quantum Hall effect.

He was inspired to write an explanation of the effect. After a fl awed fi rst draft (“It was rejected [by the Physical
Review Letters], thank God.”) he computed the properties again from scratch. This time his letter was published. The success of his theory brought several academic offers, and in 1985 he joined Stanford University, where he rose to professor in 1989. From 2004–06 he served as the president of Korea Advanced Institute of Science and Technology (KAIST) in Daejeon, South Korea. Laughlin met his wife Anita at MIT. They have two sons. 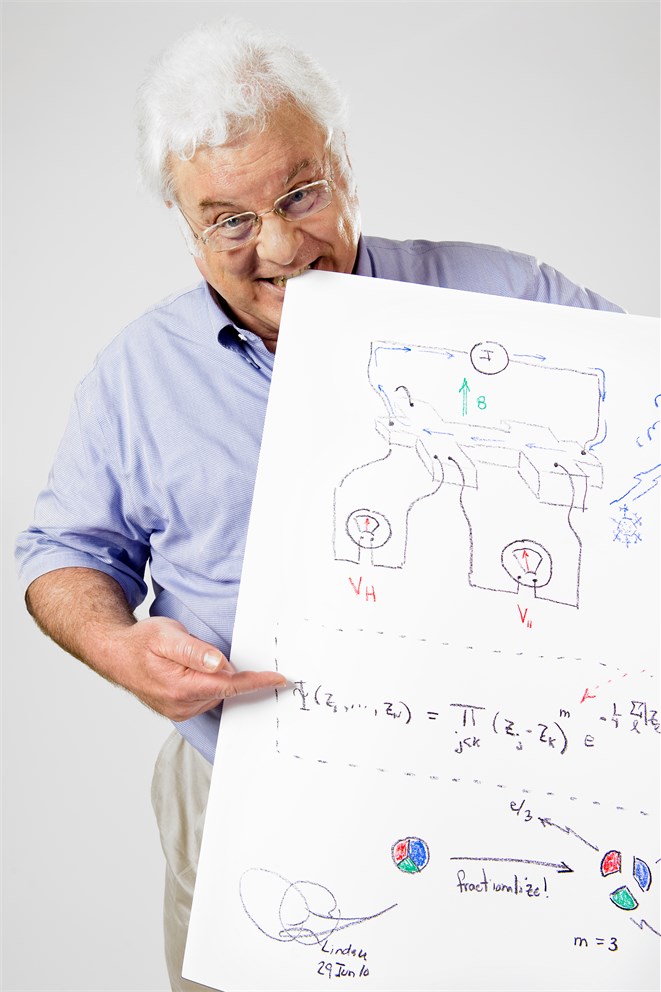 “So, what have the others done?”
(No comment from me until the session is over.)
“Has anyone done THAT?”
No, indeed nobody, Mr. Laughlin!
I love this photograph, but it was not my idea.
Robert Laughlinʼs sense of humour is famous – he loves to draw
caricatures of friends and colleagues. I just wish his intellectual
capabilities were as infectious as his humour!

“What we’re talking about here is the genesis of physical law,” says Bob Laughlin, “This experiment is the vanguard of things to come in the next century.” Focus, for a moment, on the equation in the dashed box on the left hand side of Laughlin’s sketch. That’s the ‘Laughlin wavefunction’, which in 14 symbols provided a theoretical explanation of an experimental observation made by Horst Störmer and Daniel Tsui, with whom Laughlin shared the Nobel Prize in Physics. His analysis demonstrated that electons in a strong magnetic field were condensing to form a new kind of quantum fluid. “But what’s a quantum fluid?” asks Laughlin.

In answer, he continues,“This is a very sophisticated idea from physics that now goes under the name of emergence. And what it is, is many particles working together to make something new. A liquid is a perfect example of that. The water molecules work together and make this thing called the liquid and it has very general properties that don’t depend on the fact that it’s water. Liquid water is the same thing as liquid air, is the same thing as liquid metal. So you know about liquid, you know about solid, you know about gas. And then there’s some other things we know that are like that, a little more subtle, like magnetism, what we call charge order. Things that are like liquid, solid, gas, but aren’t exactly liquid, solid, gas. These so-called states of matter are important for electronics. This discovery was a new one of those that didn’t exist in nature before as far as we knew. One of the most important frontiers of physics now is discovering new ways that matter organises itself, and in the process creates law.”

“Good images are very important,” says Laughlin, “and hand drawn ones, it turns out, are more powerful than photographs, and the reason why is because they tell the people who see them about you.” Returning to his sketch, the drawing top left is a sketch of the seminconductor apparatus used to make the experimental measurements, with a cloud blowing on it to show that it has to be very cold. The graphs on the right show how the measurements look, and at the bottom is a colourful reference to a concept called quantum number fractionalization, which Laughlin describes as one “for the specialists.”