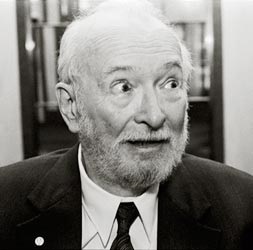 Paul Lauterbur was named as the 2003 Nobel Laureate in Physiology or Medicine for his pioneering discoveries concerning magnetic resonance imaging. Magnetic resonance imaging, MRI, is now a routine method ensuring that physicians can give their patients the best treatment options available, while avoiding more invasive procedures.

Prior to joining the University of Illinois, Dr. Lauterbur was a professor of Chemistry and Radiology at the State University of New York at Stony Brook. While at Stony Brook, Dr. Lauterbur first realized that by varying the strength of the magnetic field and analyzing the frequencies of the resulting radio signals, he could use nuclear magnetic resonance to create a two or three-dimensional picture, thus laying the foundation for what would become magnetic resonance imaging, and he then worked in that field for almost 30 years. Dr. Lauterbur’s current research interests are in chemistry, especially its role in the origin of life.

A native of Sidney, Ohio, Dr. Lauterbur resides in Urbana, Illinois, with his wife, Joan Dawson, an Associate Professor of Molecular and Integrative Physiology, Biophysics, and Neuroscience at the University of Illinois at Urbana-Champaign. Dr. Lauterbur and Dr. Dawson have one child, Elise, a college student. Dr. Lauterbur has two other children, Dan and Sharyn, form his first marriage.