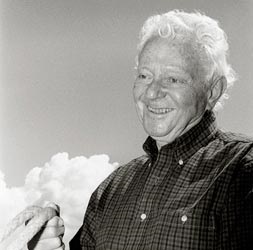 Leon Lederman, internationally renowned specialist in high-energy physics, is director emeritus of Fermi National Accelerator Laboratory in Batavia, Illinois - USA. Lederman was the director of Fermilab from 1979 until 1989. Since 1998, he holds the position of Resident Scholar at the Illinois Mathematics and Science Academy; and since 1993, Pritzker Professor of Science at the Illinois Institute of Technology in Chicago.

He has served as President and Chairman of the American Association for the Advancement of Science, the largest scientific organization in the U.S. He is a member of the National Academy of Sciences; and has received numerous awards, including the National Medal of Science (1965), the Elliot Cresson Medal of the Franklin Institute (1976), the Wolf Prize in Physics (1982), the Nobel Prize in Physics (1988) and the Enrico Fermi Prize given by President Clinton in 1993. Dr. Lederman has received honorary degrees and academy memberships in over 60 institutions, including those in England, Brazil, Mexico, Argentina, Italy, Israel, Finland, Russia, India and China.

Dr. Lederman has also worked tirelessly to improve science education. He was instrumental in founding the Teachers Academy for Math and Science, which provides professional development for primary school teachers in the Chicago area. The “hands-on” pedagogue has been applied in France, Brazil, China and Malaysia. The Lederman Science Center, a hands-on science museum, where visitors can explore the physics and technology of Fermilab, was also born as a result of his efforts. Lederman initiated “Saturday Morning Physics”, a short-course for high school students, in 1980. He has been an outspoken advocate for new approaches to secondary school science that emphasize a coherent three-year science curriculum beginning with physics. There are a growing number of schools introducing the new curricula inspired by his advocacy. 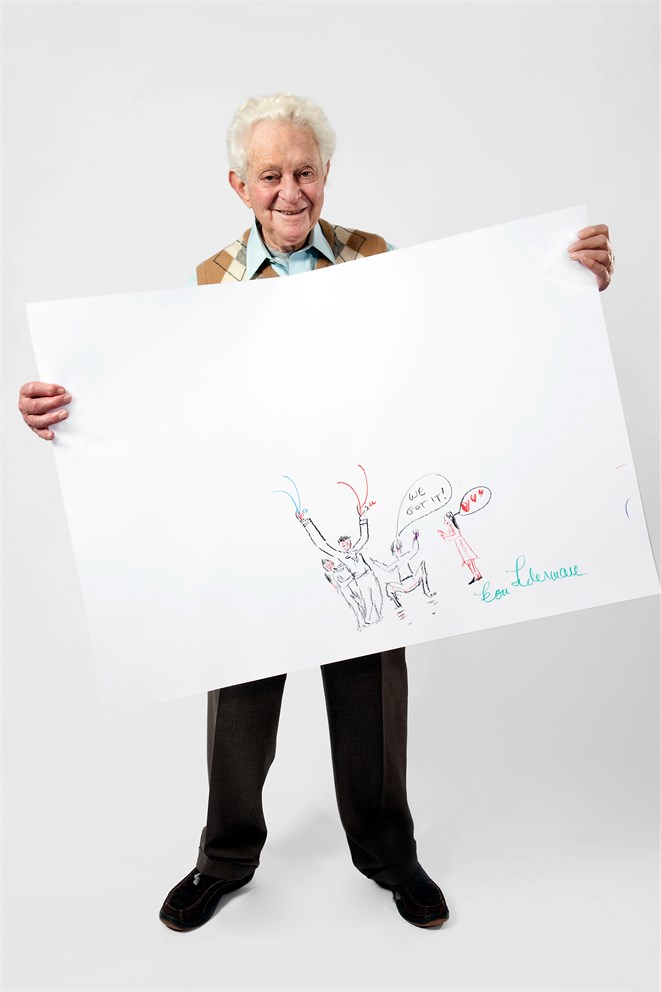 Look at this drawing: No science there, itʼs a party crowd of Nobel
Laureates! But there is an interesting detail to the right of the
sketch: A lady! Yes, Nobel Laureates are attractive! And, as I am later
told by another laureate, this is just what happened to
Leon Lederman after he won his Nobel Prize!

The Eureka Moment?
by Adam Smith

Uniquely in this exhibition, Leon Lederman’s sketch illustrates both a discovery and the very moment of discovery. Three men, who must surely be Lederman himself and his co-Laureates Melvin Schwartz and Jack Steinberger, are seen to be celebrating a momentous event. “We got it!” shouts one, leaping in the air. What they got is shown by those blue and red lines being held aloft by the man in the centre: the revelation that a family of elementary particles known as leptons always exists as pairs of particles. To the right appears a lady, apparently in love with at least one of the men. When asked why he chose to add her to the drawing, Lederman jokingly replies, “Can you possibly imagine any drawing that doesn’t have a lady in it?”

At the beginning of the 1960s, thinking about ways to explore the so-called ‘weak forces’ that govern, among other things, radioactive decay, Melvin Schwartz proposed creating a beam of neutrinos in the particle accelerator at Columbia University in New York. Being chargeless and almost without mass, neutrinos are exceptionally hard to detect, even by the testing standards of elementary particles. Neutrinos normally pass through us (and everything else, including the sun and earth) without bumping into any other particles, and thus generally leave no trace of their presence. So the creation of that beam and the detection of the resulting neutrinos was an intellectual and technical tour-de-force.

The neutrinos the three Laureates observed were of an entirely new type, being associated with muons rather than electrons. Looking closely at the sketch, the blue and red lines are seen to be labelled by a tiny ‘e’ and ‘μ’. These letters refer to the electron and the muon respectively. These are closely related, negatively-charged fundamental particles (known collectively as leptons), the muon being best thought of as a much heavier version of the electron. The division of each line into two, looking much like the tracks seen in a particle detector, indicates the discovery that each of these particles consists of not one, but two elements, one of which is an associated neutrino.

Although the theme of the drawing seems obvious, Lederman cautions the viewer against being too certain about what it depicts. “I think interpreting this picture must be enigmatic,” he concludes.