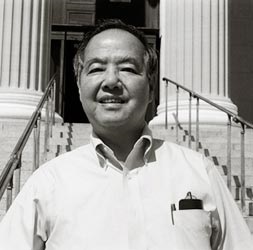 Non-physicists may not know what “parity conservation” is. The explanation – the quality of space refection symmetry of subatomic particle interactions – may not help. Sufffice to say it is important to the study of particle physics.

Fortunately, in his late 20’s, Tsung Dao (T.D.) Lee broke “a most puzzling deadlock in the field of elementary particle physics”. Lee was born in November 1926 in Shanghai, China as the third of six children. He received most of his high school education in Shanghai. In 1943–1944, he attended the National Chekiang University in Kweichow. In 1945, he attended the National Southwest Associated University in Kunming, Yunnan Province where his talent for physics was recognized and encouraged by Professor Ta-You Wu. After completing only his second year at South-west Associated University, Lee was awarded a graduate fellowship to study physics in the United States. In 1946, Lee arrived at the University of Chicago, where Enrico Fermi selected him to be his doctoral student. Four years later, Lee completed his thesis on “Hydrogen Content of White Dwarf Stars” and gained his PhD in 1950.
During the years 1950–53, Lee worked briefly at Yerkes Astronomical Observatory in Wisconsin before moving on to the University of California at Berkeley and at the Institute for Advanced Study at Princeton.

In 1953, Lee joined Columbia University as an assistant professor of physics. His first work was on the renormalizable field theory model, better known as the Lee Model. In 1956, at age 29, Lee became the then youngest-ever full professor in Columbia University’s faculty history. Also, in 1956, Lee in collaboration with C.N. Yang, concluded that the theta-meson and tau-meson, previously thought to be different because they decay by modes of differing parity, are in fact the same particle (now called the K-meson). Because the law of parity conservation prohibits a single particle from having decay modes exhibiting opposite parity, the only possible conclusion was that for weak interactions, at least, parity is not conserved. The following year Chien-Shiung Wu, at Columbia University, confirmed their theoretical conclusions through a series of experiments. When Lee shared with C. N. Yang the 1957 Nobel Prize in Physics, Lee was barely 31 years old, the second youngest scientist (after Sir Lawrence Bragg in 1915, aged 25).