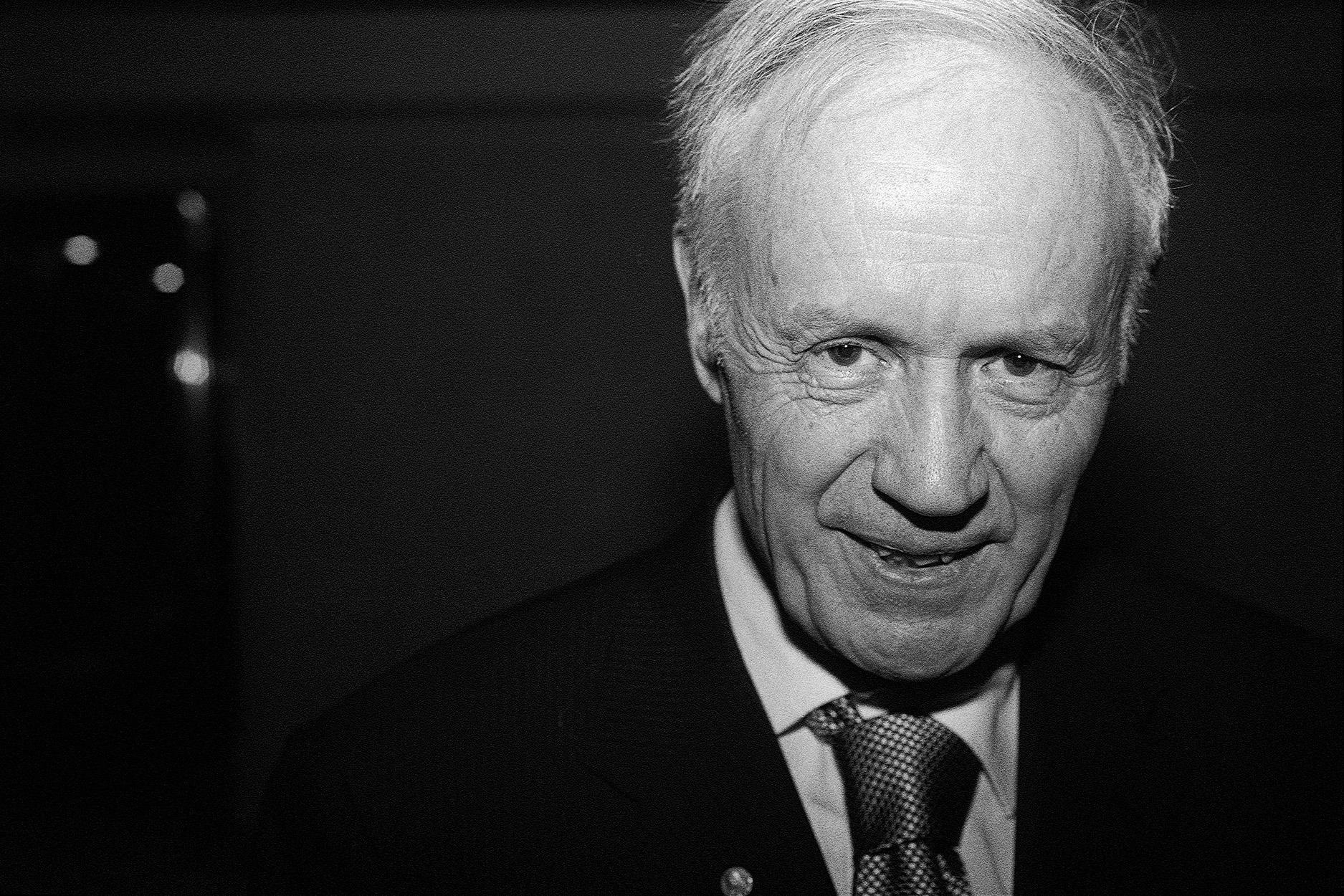 In the same way that some metals become superconductive at very low temperatures, allowing electrical currents to pass without resistance, so some liquids can become superfluid, flowing without friction or viscosity, over any obstruction, thought the narrowest pores and, subject to its own inertia, indefinitely.

It was for his explanation of how the atoms in superfluid He-3 are ordered and interact that Sir Anthony J. Leggett was awarded a one-third share of the 2003 Nobel Prize for Physics, along with Alexei Abrikosov and Vitaly L. Ginzburg for their work with superconductors.

Leggett has published several papers on the nature of superfluidity and, in 1965, formulated a theory of the superfluid phase in helium-3, the only stable isotope of any element with more protons than neutrons. He-3 was rare, however. It is a non-radioactive by-product of nuclear weapons. As a result, it was not until 1972-73 that Leggett could demonstrate that He-3’s superfluidity was different from that of the more common He-4, and he detailed the state using the new data. Just as electrons with opposite spin pair up to allow electric current to flow without resistance in a superconductor so, in He-3, atoms with identical spin can form pairs to allow superfluid flow of the liquid.

Leggett’s theory provided greater insight into the ways in which matter behaves and has been used in many areas of physics, including models of phase transitions in the nascent universe.

The eldest of five children, Anthony James Leggett was born in London in March 1938 but was evacuated to Windsor, Surrey, during the war. He returned at the end of the war and attended the local Catholic primary school, and then Sacred Heart College in Wimbledon and Beaumont College in Windsor, where his father taught science. Anthony primarily studied classics, however, and won a scholarship to Balliol College, Oxford, in 1955. After completing his degree he transferred to Merton College to study physics under Dirk ter Haar, who encouraged Leggett to apply for a Prize Fellowship at Magdalen, which he held from 1963-67, writing a dual thesis on the properties of liquid helium. During that time Leggett spent a year as a postdoc research fellow at the University of Illinois Urbana-Champaign (UIUC), and a year in the group of Professor Takeo Matsubara at Kyoto University in Japan.

In 1967 he joined the faculty at the university of Sussex (where he met and, in 1973, married anthropologist Haruko Kinase, with whom he has a daughter) but also taught in Japan and Ghana, and as a visiting scientist at Cornell University in the US. In 1983 he took the MacArthur Chair at UIUC from which he retired in December 2019. From 2006-16, he also held a position at the Institute for Quantum Computing in Waterloo, Canada. In 2013, he became the founding Director of the Shanghai Center for Complex Physics.

Among many other awards and honours, Sir Anthony was made a KBE (Knight Commander) in 2004 for his services to physics. 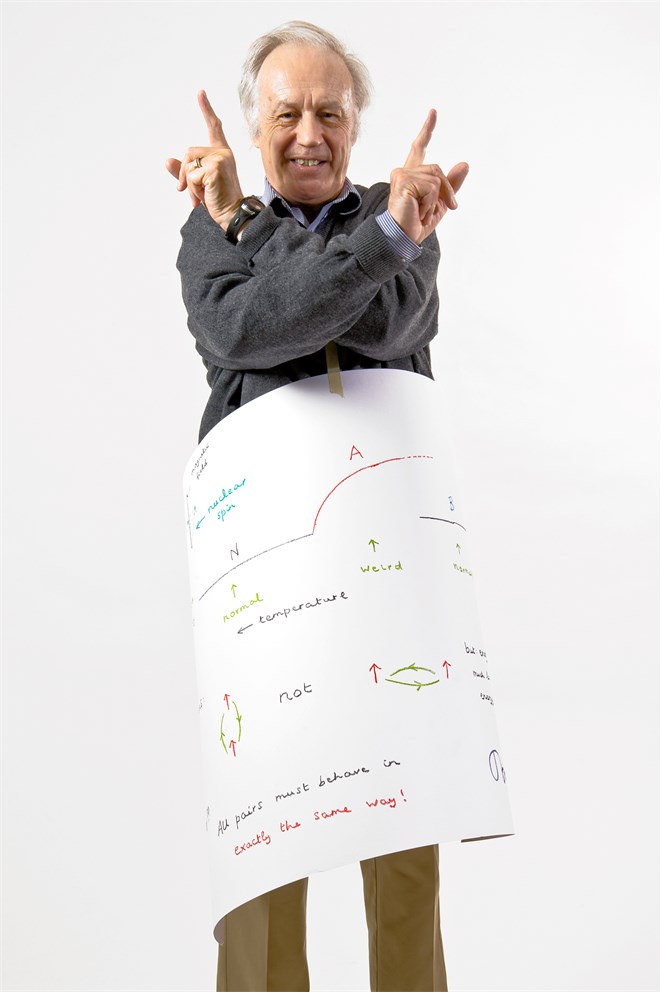 Itʼs quite a twist when atoms form pairs to allow for superfl uidity, but Tony
Leggett wanted to show exactly how they do it – with his hands!
“But Professor, how can you hold up your drawing to the camera when you
need both of your hands for your presentation of paired atoms?”
“Just tape the drawing onto me!”

Pairing-up in the Cold
by Adam SMith

Anthony Leggett’s sketch concerns the behaviour of an isotope of helium at very low temperatures. Close to absolute zero, helium-3 (3He) displays the property of superfluidity, being able to creep up the walls of the vessel that holds it, as if it had no viscosity whatsoever. The drawing depicts both the experimental observation and the theoretical explanation that allowed Leggett to account for this phenomenon.

At the top we see the spinning nuclei of the 3He atoms in the presence of a magnetic field. The nuclei possess a resonance frequency proportional to the magnetic field, and this can be detected by experiment. The lines in black and red, labelled N, A and B, show what happens to that resonance frequency as you lower the temperature of 3He to just a very few thousandth of a degree. Passing towards colder temperatures from left to right, the nuclei spin like tops in a magnetic field down to about three millidegrees (region N), but below that something very odd seems to happen. The resonance frequency starts rising (region A), goes on rising for a bit and then abruptly falls again back to the original value (region B) at still colder temperatures.

Leggett’s work showed that these three regions correspond to completely different phases of 3He, and that the behaviour in region A is explained by a rearrangement of the nuclear spins. In this region, the spins rotate around each other in pairs in the way Leggett has tried to indicate in the left hand diagram (with red and green arrows), but not, importantly, in the way indicated by the right hand diagram. These two states are of almost equivalent energy, so both states should be equally probable, but Leggett showed that the nuclei are forced into just one of the states in much the same way as electrons are forced into so-called Cooper pairs in superconductive states. Cooper pairs of nuclei are formed exactly at the point where the red curve starts, leading to superfluidity, and these pairs grow stronger as the temperature decreases, until the nuclear spins suddenly collapse to the final ground state of 3He.

“It seemed to me so weird,” recalls Leggett, “that I seriously contemplated the possibility that under these very extreme conditions, quantum mechanics was breaking down. But of course that in the end turned out not to be the case.”