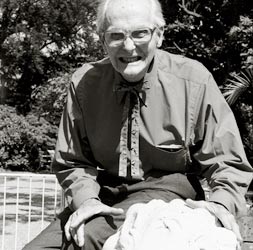 William Nunn Lipscomb is an American physical chemist who received the 1976 Nobel Prize in Chemistry for his research on the structure and bonding of boron compounds, illuminating the general nature of chemical bonding.
He was born in Cleveland, Ohio, in 1919, but the family moved to Lexington, Kentucky, the following year. He gained his BSc at the University of Kentucky in 1941 and went on to the California Institute of Technology, first studying physics but returning to chemistry in early 1942 under the influence of Linus Pauling. Until the end of 1945 Lipscomb, like most scholars, devoted his research to the war effort. He duly completed his PhD in 1946 and joined the faculty of the University of Minnesota, rising to professor and head of the physical chemistry division.

It was there, during the 1950s, that he performed his Nobel work. Applying X-ray crystallography techniques, Lipscomb and his colleagues were able to deduce the molecular structure of boranes and develop theories to explain their bonds. Boranes are compounds of boron and hydrogen. The stability of boranes could not be explained by traditional concepts of electron bonding, in which each pair of atoms is linked by a pair of electrons, because boranes lacked suffficient electrons. Lipscomb showed how a pair of electrons could be shared by three atoms. His theory successfully serves to describe boranes and many other analogous structures. He later applied the same methods to related problems, including helping future Nobel laureate Roald Hoffmann with work on carboranes (boron/carbon clusters).

In 1959 he moved to Harvard University, where he concentrated on the atomic structure of proteins, particularly how enzymes work. He served as chairman of Harvard’s department of chemistry from 1962–65, received the Abbott and James Lawrence Professorship in 1971, and the George Ledlie Prize in 1971. He played classical chamber music on the clarinet, and was a regular face at the light-hearted Ig Nobel awards for obscure scientific endeavour, even dressing as a bottle of beer on one occasion.