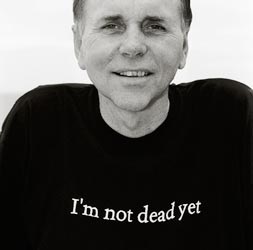 Barry J. Marshall describes himself as ‘brash’ and is the ebullient half of a scientific odd couple with J. Robin Warren, 15 years his senior, who is generally regarded as quiet, thoughtful and careful. Careful is not a word to describe Marshall, who famously downed a flask of bacteria to prove a point, but the point was well made, as it won the pair the Nobel Prize for Physiology or Medicine in 2005.

The partnership began in 1981 when Marshall, then a trainee doctor, asked Warren if he would consider a joint research project. Two years earlier, Warren had noticed that biopsy samples from patients with gastritis had an abundance of curved bacteria. He had been gathering more samples but couldn’t convince people there was a link – common wisdom at the time was that peptic stomach ulcers were related to diet and stress.

Soon the duo had set up a study of 100 patients and by the following year had managed to cultivate the previously unknown Helicobacter pylori bacteria, discovering by accident that the bacteria take longer than usual to grow. In 1983 the pair published evidence of their findings in The Lancet and were invited to give a lecture in Belgium. Warren recalls that microbiologists were easily convinced by their samples and images of spiral H. pylori bacteria, but the wider medical world was still sceptical, despite many reporting similar findings.

Yet when they published their results in The Lancet in 1984 the consensus was that their paper was not of great importance, so it was then that Marshall decided on his practical demonstration, swallowing a cocktail of H. pylori to induce gastritis, which he later cured with antibiotics. This experiment was published in 1985 in the Medical Journal of Australia. Even then it was not until the early 1990s that popular opinion shifted, since when H. pylori has been largely eradicated and peptic ulcers are no longer a problem.

In 1981, Marshall was an internal medicine trainee at the Royal Perth Hospital where he met Warren, a pathologist interested in gastritis.
After ten years in the US at the University of Virginia, where he hold a tenured professorship he returned to Australia and continues his research in the H. pylori Research Laboratory at UWA. In 2007, Marshall was appointed Co-Director of The Marshall Centre for Infectious Diseases Research and Training, founded in his honour.

After their unpromising start, Marshall now has several professional accolades and was elected a Fellow of the Royal Society in 1999.
He married his wife Adrienne, a psychologist, in 1972 and they have four adult children.