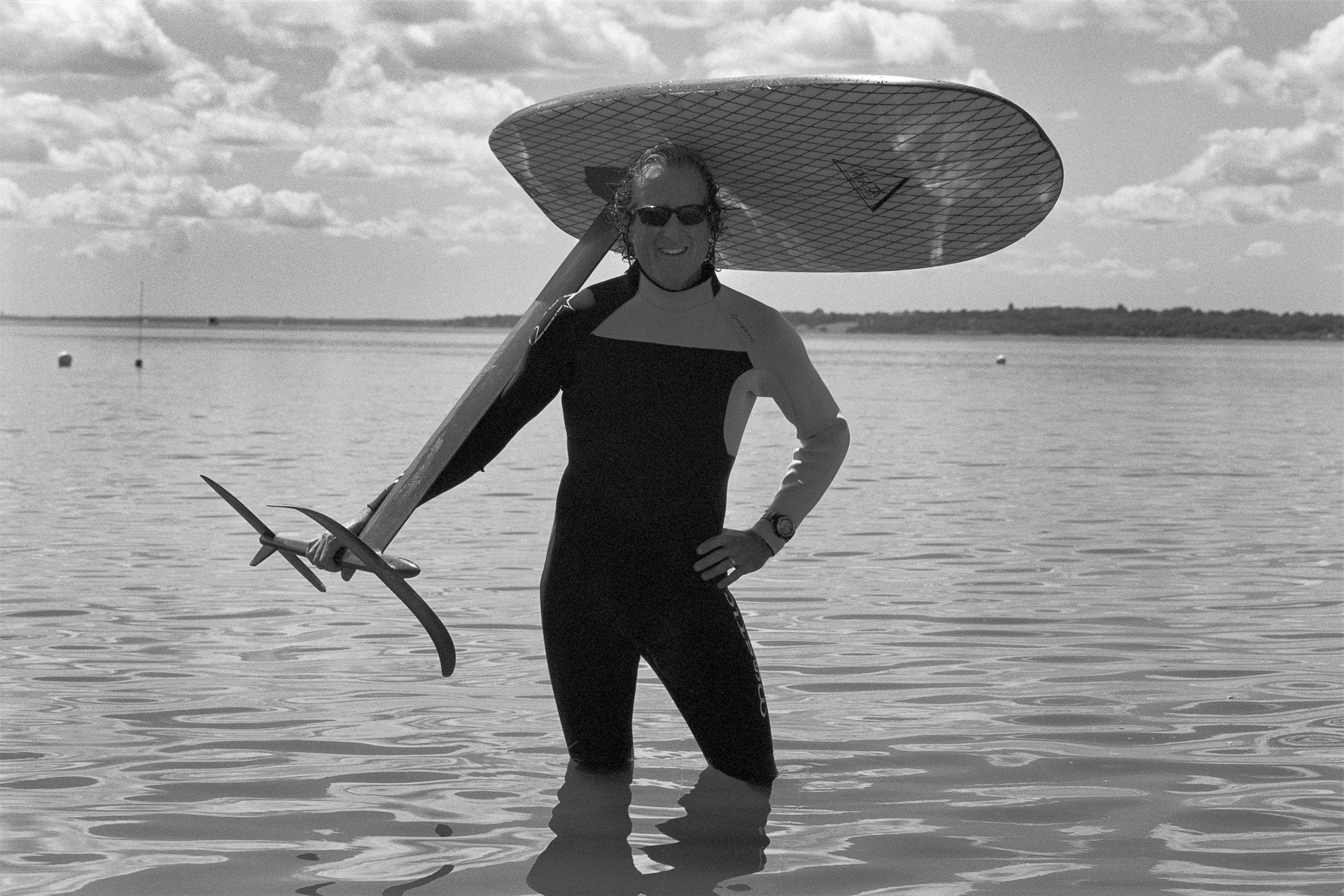 Nobel Prize recipient Craig C. Mello, PhD, is the Blais University Chair in Molecular Medicine at the University of Massachusetts Medical School (UMMS). He was also designated an Investigator of the Howard Hughes Medical Institute in 2000, the third HHMI researcher selected at UMMS. HHMI is a $13 billion medical research organization that employs more than 350 eminent researchers at 72 medical schools, universities and research institutes worldwide.

Dr. Mello holds his BS in biochemistry from Brown University and his PhD in Cellular and Developmental Biology from Harvard University. He was a postdoctoral fellow at the Fred Hutchinson Cancer Research Center before coming to UMMS in 1995. He is also a 1995 Pew Scholar in the Biomedical Sciences.

Mello and his colleague Andrew Fire, PhD, formerly of the Carnegie Institution of Washington, received the 2006 Nobel Prize in Medicine for their discovery of RNA interference (RNAi). They demonstrated that a certain form of RNA had the unanticipated property of silencing—or interfering with—the expression of a gene whose coding sequence of DNA was similar to that of the RNA they tested. The RNAi mechanism—a natural response of an organism to double-stranded RNA, of which many viruses are comprised—destroys the gene products that a virus needs to replicate itself, essentially halting the progression of the invading viral infection.

The discovery, which offers astounding potential for understanding and manipulating the cellular basis of human disease, has had two extraordinary impacts on biological science. One is as a research tool: RNAi is now the state-of-the-art method by which scientists can knock down the expression of specific genes in cells, to thus define the biological functions of those genes. But just as important has been the finding that RNA interference is a normal process of genetic regulation that takes place during development. Thus, RNAi has provided not only a powerful research tool for experimentally knocking out the expression of specific genes, but has opened a completely new and totally unanticipated window on developmental gene regulation.

Mello and Fire’s work in RNAi, considered the formative paper on the topic in a 1998 edition of Nature, was hailed as “an electrifying discovery” and named the 2002 “Breakthrough of the Year” by Science magazine. In 2003, Mello and Fire received the prestigious National Academy of Sciences Award in Molecular Biology for their pioneering work as well as the Wiley Prize in the Biomedical Sciences from Rockefeller University; the fourth Annual Aventis Innovative Investigator Award at the Drug Discovery Technology World Conference; and, in 2004, the Warren Triennial Prize, the highest research honor bestowed by Massachusetts General Hospital.

In 2005, the team was named to the National Academy of Sciences and were recipients of several additional honors including Brandeis University’s Lewis S. Rosenstiel Award for Distinguished Work in Medical Research, the Canadian government’s Gairdner International Award and the Massry Prize. In 2006, the pair flew to Germany to accept the Paul Ehrlich and Ludwig Darmstaedter Prize, one of the highest and most internationally renowned awards conferred in the Federal Republic of Germany in the field of medicine. Most recently, Dr. Mello was named the inaugural recipient of The Dr. Paul Janssen Award for Biomedical Research by Johnson & Johnson.

Given the fundamental and broad-based impact of RNAi, a patent, “Genetic Inhibition by Double-Stranded RNA,” (US Patent 6,506,559 B1) issued to UMMS and Carnegie, is expected to have far-reaching licensing potential both in the lab and in drug development. Because both institutions were eager to bring RNAi to bear as broadly as possible to hasten genetic research, they developed a licensing policy by which companies can readily obtain, for a basic fee, a wide-ranging and non-exclusive license for scientists to use the technology for rese... 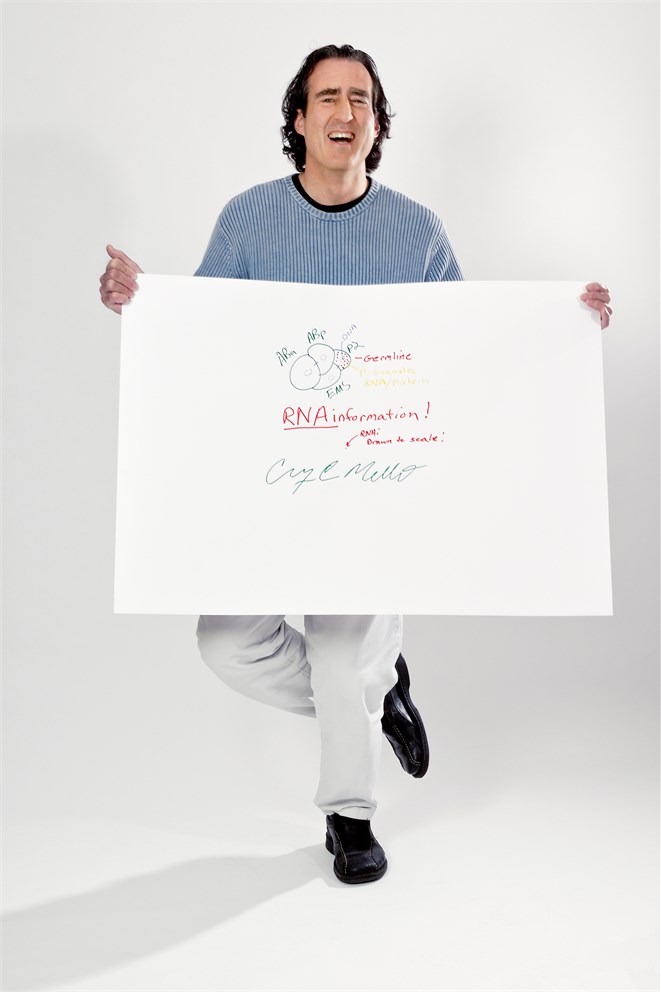 Mello is a star. Thousands of journalists run after him, especially
women. Why? He brought his wife along. She’s also very cool. In his
drawing he creates a private joke: he makes a tiny red dot, captioned
“RNA, drawn to scale.” Five minutes later, he is gone...

The Evolving Horizons of Science
by Adam Smith

Scientists often tell you that it’s always the next discovery that’s most exciting. Craig Mello certainly thinks so, relegating his Nobel Prize-awarded discovery of the phenomenon of RNA interference (RNAi) to a tiny red dot in the centre of the page, and then concentrating entirely on sketching his current area of interest: RNA information!

“ Yeah,” he says, “well I think RNAi was the tip of the iceberg, you know, and really there’s a lot more to learn, which is always the fun thing with science. You learn one thing and what you really realise is how little you actually knew to begin with. Each new advance in science is, in a way, very humbling.”

When Craig Mello and Andrew Fire published their findings, in 1998, that double-stranded RNA could silence gene expression, they revealed a fundamental mechanism for controlling the flow of genetic information and opened a whole new research field. But from the moment they began working on RNAi they noticed that the silencing they were inducing could be transmitted from one generation to the next. Somehow the changes produced by their experimental manipulations were flowing in the germlines of the worms they were studying. This is an example of epigenetic memory, the heritable transmission of changes by mechanisms other than changes in the underlying DNA structure of the organism.

What the drawing shows is a four-cell stage embryo, with the cells drawn as circles, and inside each cell you can see the nucleus. The cell with the red dots in it is the germline cell. This is the immortal cell that can essentially live on infinitely, as long as the Earth exists, not only produce more worms, but also more organisms that can evolve into a whole variety of new species. And Mello is now concentrating on trying to understand the role of RNA and a host of associated proteins in the fundamental biology underlying evolutionary change.

“I’m just so thankful to have had all the opportunities I have as a scientist, and to be able to pursue this very interesting question of how we evolve,” says Mello. “It’s just so much fun and every new vision just supplants the previous one and just takes you in a new direction. I hope I never discover or find any result that makes me want to stop.”