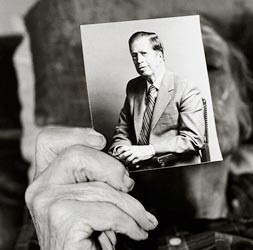 Chemical reactions in living organisms require catalysts in the form of proteins. The first step in the formation (bio-synthesis) of a protein is the construction of a linear molecule called a peptide, composed of amino acid residues. Bruce Merrifield, a professor at Rockefeller University, New York, was awarded the 1984 chemistry prize for his development of a simple and ingenious method for obtaining peptides and proteins.

The chemical synthesis of peptides is an important task for organic chemists but the method of producing them was antiquated and time consuming, as amino acids (comprising a basic amino unit and a carboxylic acid) have to be built up into peptide chains one link at a time, any one of which could fail or be contaminated, so isolation is required. Merrifield solved this problem by attaching the first amino acid to a solid polymer. After each synthetic step, byproducts and ‘swarf’ can be removed by filtration – no isolation is needed. When the entire synthesis is complete the peptide is removed from the polymer. Not only is the process far quicker and simpler, but it is more reliable, raising the overall success rate from 0.003 percent to 61 percent, so requiring far less raw material. Merrifield’s method has revolutionised peptide and protein chemistry, which can now also be automated. He and his coworkers later synthesised ribonuclease A in 1969.

Robert Bruce Merrifield was born in Fort Worth, Texas, in 1921, but grew up in California where, through a series of moves from city to city, he attended nine grade schools and two high schools before graduating from Montebello High School near Los Angeles in 1939. After two years at Pasadena Junior College he transferred to the UCLA, gaining a BSc in chemistry, and going to work at the Philip R Park Research Foundation, working on amino acids and animal growth. After a year Merrifeld returned to UCLA for further training and received his PhD in 1949. The day after his graduation Merrifield married biologist Elizabeth Furlong (they have six children and numerous grandchildren) and left California for New York, where he joined the Rockefeller Institute for Medical Research (now Rockefeller University).

There, he worked for DW Woolley on dinucleotide and peptide growth factors. These studies led to the need for peptide synthesis and, eventually, to Merrifield’s new system in 1959. In 1963, he reported his method, called ‘solid phase peptide synthesis’. Merrifield was elected a member of the US National Academy of Sciences in 1972 and received several awards including the Lasker Award (1969), the Gairdner Award (1970), and the Alan E Pierce Award of the American Peptide Symposium (1979). After a long illness with skin cancer Merrifeld died on May 14, 2006, at the age of 84.