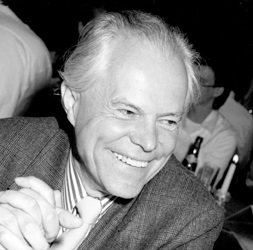 Rudolf Ludwig Mößbauer received one of the 1961 Nobel Prizes in Physics for his achievement, which is recognizable as bearing his name – the Mößbauer effect. Essentially what he discovered, while still a student in 1957, was a ‘recoil-less atom’.

Mößbauer was born in January, 1929, in Munich. After leaving school he worked for a year in industrial laboratories before entering the Technical University in Munich in 1949, studying physics. He passed his initial exams in 1952 and continued his studies in Applied Physics, at the same time acting as assistant mathematics lecturer. His main work for his doctorate involved the study of absorption of gamma rays in matter. He carried out a series of investigations at the Max Planck Institute for Medical Research in Heidelberg. It was here in 1957 that he made his great discovery.

Normally, atomic nuclei recoil when they emit gamma rays, and the wavelength of the gamma ray varies with the amount of recoil. Mößbauer found that a nucleus could be embedded at low temperature in a crystal lattice that would absorb its recoil – what he called Recoilless Nuclear Resonance Absorption, but has more simply been dubbed the Mößbauer effect. By cushioning the recoil it was possible to produce gamma rays at specific wavelengths for precise measurements, which were used to measure properties of atomic nuclei and to test Albert Einstein’s general theory of relativity. It has since proved useful in many other areas of research and applications.

Mößbauer gained his PhD in 1958 and after working as an assistant at Munich moved to the California Institute of Technology in 1960, becoming professor of physics the following year. Three years later he returned to Munich to become professor of physics at the Technische Universität. He became interested in the study of neutrinos and in 1972 he went to Grenoble, France, as director of the Institute Max von Laue-Paul Langevin, and the German-French-British High-Flux Reactor. He returned again to Munich in 1977, and continued with his research on the ‘neutrino puzzle’ which consumed his interest even after his retirement in 1997. He hold numerous awards, including the Prize of the Research Corporation New York (1960), Röntgen Prize of the University of Giessen (1961), and Elliot Cresson Medal from the Franklin Institute (1961) and several honorary professorships. He was married twice, first to Elisabeth Pritz, with whom he had two daughters and a son, and later to Christel née Braun.