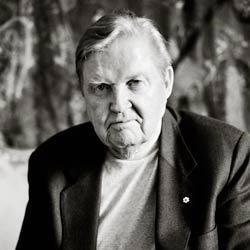 Robert Alexander Mundell was awarded the 1999 economics prize “for his analysis of monetary and fiscal policy under different exchange rate regimes and his analysis of optimum currency areas”. His work has inspired generations of researchers and dominates fiscal policy in open economies. For many years, Mundell’s theories have been at the core of teaching in macroeconomics.

Mundell was born in Canada in 1932 and attended the University of British Columbia in Vancouver. He began his doctoral studies at the University of Washington and continued at MIT and London School of Economics, gaining his PhD from MIT in 1956. After spending 1961–63 as a researcher at the International Monetary Fund, Mundell wrote a pioneering article addressing the short-run effects of monetary and fiscal policy in an open economy. Mundell showed that the effects of stabilisation policy hinge on the degree of international capital mobility, in particular, the exchange rate regime: under a floating exchange rate, monetary policy becomes powerful and fiscal policy powerless. A floating exchange rate is determined by the market. This is the system many nations now use. Marcus Fleming presented similar research at around the same time. As a result, textbooks refer to the Mundell-Fleming Model.

Mundell’s monetary approach to the balance of payments used a simple model to examine how monetary and fiscal policy should be directed towards either external and internal balance. He anticipated the idea, now common practice, that the central bank should be given independent responsibility for price stability. In his article on ‘optimum currency areas’ (1961), Mundell weighed up the pros and cons of a common currency, as has happened in Europe. The pros include lower transaction costs in trade and less uncertainty about relative prices. The cons include the difficulty of maintaining employment when changes in demand require a reduction in real wages in a particular region. Mundell stressed the need for high labour mobility to offset such disturbances.

Most of his contributions were made while he was based at the University of Chicago from 1966–71. Since 1974 he has been at Columbia University; and in 2001 was made University Professor. He has also taught at the School of Advanced International Studies, Johns Hopkins University. Mundell has been an adviser to the United Nations, the IMF, the World Bank, the European Commission, and several governments in Latin America and Europe, the Federal Reserve Board, the US Treasury and the Government of Canada. In 2003 he was made a Companion of the Order of Canada. In 2005 he was awarded the Global Economics Prize. The Mundell International University of Entrepreneurship in Beijing, China is named in his honour.