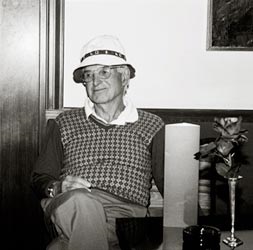 Born in Milford (Massachusetts) on April 1, 1919. After school he did a preparatory course of studies at the College of the Holy Cross. Having taken his B.A. examination, he went to Harvard Medical School in Boston, where he took his M.D. in 1943. One year later his surgical training started at the Peter-Bent-Brigham Hospital, a renowned teaching hospital. Shortly before that the first “artificial kidney” had been put into operation in Harvard, saving the lives of several patients. However, success had only been preliminary at the time, because the question if the diseased organ could be replaced by means of a transplantation was already being asked. Murray, too, examined this question.

He had already gained experience in plastic surgery during the war and later he continued to dedicate himself to the surgical restoration of faces and members of victims of accidents, of cancer patients and patients with inborn deformities. After positive results in animal experiments he succeeded in transplanting a donor kidney from one monovular twin into the other (i.e. a transplantation between genetically identical twins) for the first time in 1954. Later Murray realized that such transplantation of organs was also possible between different individuals if you succeeded in suppressing the immune defense of the recipient. His epoch-making achievement was mainly that he developed methods that made it possible to avoid the risk of rejection by means of blood transfusions and whole body irradiation, as well as by cytosis inhibiting preparations.

In 1962 he and his team succeeded in the first long-time transplantation of a kidney from a foreign person. At that time he was director of the Laboratory for Surgical Research at Harvard Medical School. Until 1969 he was the medical superintendent for plastic surgery in Boston and at the same time he taught as a professor at HMS. In 1990 he received the Nobelprize together with E. Donnall Thomas.