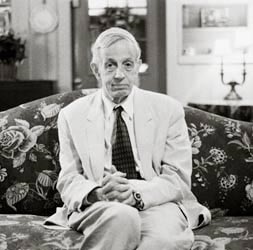 Those who have seen the film A Beautiful Mind will know something of mathematician John Forbes Nash, Jr., who received the economics award – shared with John Harsanyi and Reinhard Selten – for his work on game theory.

Nash was born in 1928, in Bluefield, West Virginia and by high school was reading advanced mathematics books and had proved the classic Fermat theorem. His parents spotted his potential and arranged extra lessons. He entered Carnegie Tech in Pittsburgh as a chemical engineering student but soon shifted to chemistry and then to mathematics, flourishing to the extent that he was awarded an MSc as well as his BSc when he graduated. While at Carnegie he took a course in economics and as a result wrote the paper The Bargaining Problem, which began his game theory studies.

He won fellowships from both Harvard and Princeton and opted for the latter. Besides developing the idea which led to his paper Non-Cooperative Games, Nash also made a discovery relating to manifolds and real algebraic varieties, so had two options for his thesis. In the event the game theory work was accepted and he gained his PhD after just two years in 1950. Known as the Nash solution, his theory explained the dynamics of threat and action among competitors, and proved popular with business strategists. His most famous work in pure mathematics was the Nash embedding theorem, which solved a classical problem of differential geometry. He also made contributions to the theory of partial differential equations In 1951 he joined MIT, where he published Real Algebraic Manifolds, but resigned in the late 1950s after bouts of mental illness.

During a sabbatical at Princeton (1956–57) Nash met and married physics student Alicia Lopez-Harrison de Lardé (she was born in El Salvador). In 1959, while Alicia was pregnant, Nash began suffering from delusions and was admitted to hospital – he was a frequent patient until 1970. Their son John Charles Martin (unnamed for a year until Nash could have a say in the matter) also became a mathematician and, like his father, was diagnosed with schizophrenia. Nash had another son, John David, in 1953 with Eleanor Stier, but had little contact with them. Nash and Alicia divorced in 1963 but reunited in 1970 on a platonic basis which ended happily when they remarried in 2001. He continues to work at Princeton. He has received several awards and created two games: Hex, (independently created by Piet Hein); and So Long Sucker, with M. Hausner and Lloyd Shapley. Over the years Nash’s delusions subsided and he gained more control. In a lesson to us all, perhaps, he says his breakthrough was: “The rejection of politically oriented thinking as essentially a hopeless waste of intellectual effort.”

In May 2015 John Nash received the Norwegian Academy of Sciences and Letters' Abel Prize. On their way home from Norway, Nash and his wife died in a car accident.