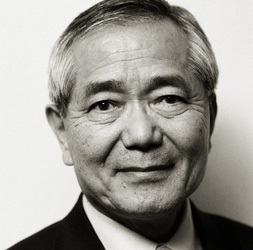 The Nobel Prize for Chemistry, 2010, was awarded jointly to Richard F Heck, Ei-ichi Negishi and Akira Suzuki for their independent work on ‘palladium- catalysed cross couplings in organic synthesis’. Synthesis of organic compounds has opened doors in many areas of science from the pharmaceutical industry to modern electronics. In nature, organic chemistry takes place in myriad forms and is the basis of life itself, using the stable base of carbon.

By building on organic chemistry man has been able to create new medicines from penicillin onwards and new materials such as plastics and light-emitting diodes (LEDs). These complex chemicals are difficult to create, however, as carbon is a stable chemical and relatively unreactive. Early attempts to bind carbon atoms together worked for simple molecules but produced too many by-products when synthesising more complex molecules. Palladium, a rare silvery-white metal, proved to be the solution, serving as an ideal catalyst when introducing carbon atoms and providing chemists with a more precise and efficient ‘breeding ground’ for carbon reactions, creating more of the desired end product for less waste by-products. Much of the groundwork in this field was laid by Heck, beginning in the late 1960s. Suzuki and Negishi (who both studied at Purdue University in Indiana, USA, under 1979 Nobel laureate Herbert Brown) were among those introducing the most important refinements. Negishi cross-coupled carbon-zinc compounds and organic halides (halogen compounds such as chloride, bromine or iodine) using palladium (nickel may also be used) as the catalyst. In the Negishi coupling the palladium is first oxidized, making it even more efficient. Negishi coupling is used to produce the painkiller naproxen and the cancer treatment taxol, as well as fluorescent marking for DNA sequencing and in creating materials for thin LED displays.

Ei-ichi Negishi was born in July 1935 in Changchun, the capital of what was then Japanese-controlled Manchukuo (now Jilin, China). He gained his BSc at the University of Tokyo in 1958 and worked at the Teijin chemical company before moving to the US to study for his PhD at the University of Pennsylvania. There he met Herbert Brown and was so impressed that in 1966 he joined his team at Purdue as a post-doctorate researcher, rising to become assistant professor in 1968. In 1972 he moved to Syracuse University in New York, where he became professor in 1979. That same year he returned to Purdue and Brown won the Nobel Prize. In 1999, Negishi was named the Inaugural Herbert C Brown Distinguished Professor of Chemistry. Among other international awards, in 2010 he was awarded the Japanese Order of Culture and named Person of Cultural Merit.

Negishi is married to Sumire. They have one daughter. His house, near the Purdue campus, is called ‘The Palladium’. 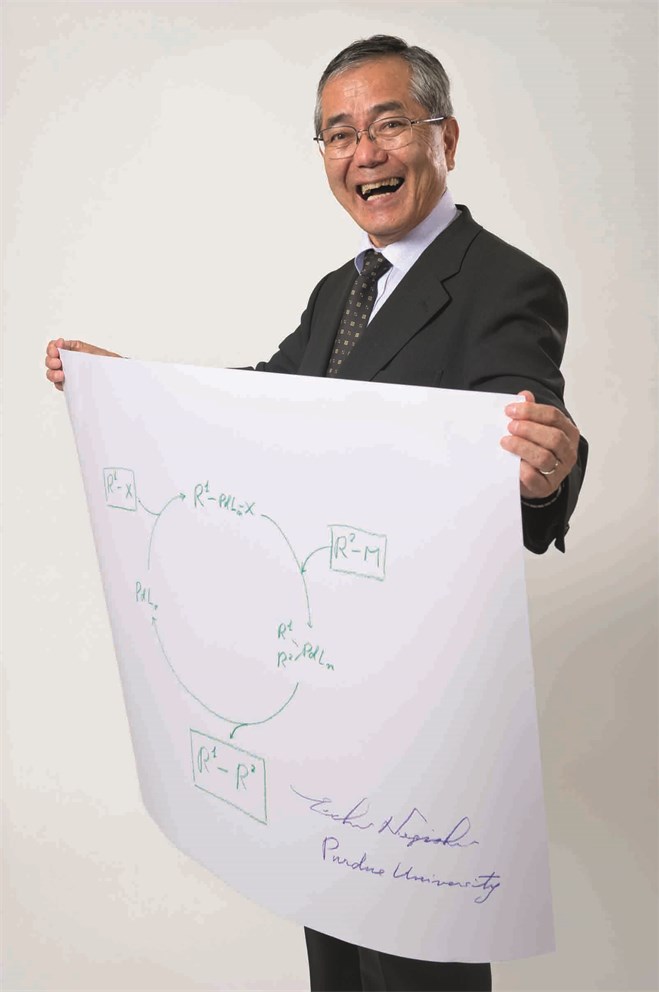 In chemistry, itʼs catalysts that make things happen in a fast and
elegant way. Ei-ichi Negishi rushes into the studio with a big smile,
grabs a crayon and gives me a fast and elegant sketch. He signs and
adds his academic affiliation, which is a first in my series.
Maybe thatʼs what great researchers are: Living catalysts of science!

It all starts with a hypothetical compound that we would like to make, R1-R2, at the bottom of the circular diagram. R1 and R2 are the two parts of an organic molecule. They are joined together by a carbon-carbon single bond (indicated by that horizontal line between them), the commonest sort of bond found in organic compounds. In what is called a retrosynthetic approach, we see that we can dissect R1-R2 into the smaller compounds R1–X and R2–M at the top of the circle (where X and M are, say, chlorine and zinc atoms respectively). So our task becomes how to obtain R1–X and R2–M, and then how to join them, eliminating chlorine and zinc, and leaving R1-R2. Assuming we can make the two smaller species in the first place, what reaction do we choose to join these two together? This is the sort of problem synthetic organic chemists face every day.
In the case of Ei-ichi Negishi’s sketch, the reaction used to join R1 to R2 is … the Negishi reaction! In fact all three of the 2010 Chemistry Laureates (Richard Heck, Ei-ichi Negishi and Akira Suzuki) had the reactions they developed named after them. The Heck, Negishi and Suzuki reactions all depend on using palladium, a silvery transition metal, as a catalyst to join organic molecules together. As illustrated in the diagram, the palladium catalyst grabs the two species R1 and R2, hooks them together, and then, as all catalysts do, goes back and does the same thing again with a fresh pair of R1–X and R2–M.
While many organic reactions are plagued by the formation of unwanted side-products and require fierce conditions to work, these palladium-catalysed cross-coupling reactions work under relatively gentle conditions. They also work with extreme specificity, and in many cases palladium-catalysed cross-coupling will faithfully hook reactants together without disturbing any structural features, just by kicking out MX. They have thus become reactions of choice in a vast range of applications, and are now a standard part of any chemist’s synthetic toolkit.
The success of the reaction has directed some attention back to the question of how best to build the reactant species, as Negishi points out; “The job of cross-coupling nowadays has been reduced to the job of preparing R1-X and R2-M in a very nice way. So that’s where some of our efforts are directed nowadays.”