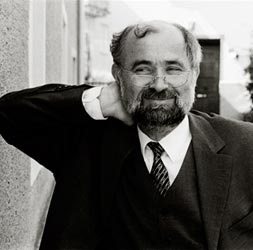 Erwin Neher was born in Landsberg am Lech, Bavaria in March 1944 and raised in Buchloe, 70km (40 miles) west of Munich. His mother was a teacher and his father an accountant in a local dairy company, so family life for Erwin and his two older sisters was not strongly affected by the war. He attended a catholic school in Mindelheim, where physics and mathematics became his favourite subjects. Combining these with his interest in living things, the young Erwin decided to become a biophysicist. In 1963, he entered the Technical University in Munich studying physics and in 1966 won a scholarship to study in the US at the University of Wisconsin, where he worked in the Biophysics Laboratory of Professor W.W. Beeman. He returned to Munich in 1967 with an MSc, seeking a more biology-oriented PhD project, preferably related to nerve excitation. He joined the Max Planck Institute of Psychiatry, where Hans Dieter Lux was investigating synaptic mechanisms in snail neurones. Trying to avoid space-clamp problems in the electrophysiological experiment, Neher and Lux came up with the idea of patch-clamp, using small suction pipettes, to measure the local current flow.

This is also where Neher first met Bert Sakmann, with whom he received the Nobel Prize in Physiology or Medicine. Separated when Sakmann went to London to work with Bernard Katz, they met again at the Max Planck Institute for Biophysical Chemistry, now in Göttingen, in 1973. Neher was working with single ion channel recording in artificial membranes; Sakmann had experience in the neuromuscular junction. The pair agreed to collaborate, aiming at the measurement of single ion channel currents. This involved developing and refining the patch-clamp technique for measuring currents in the picoampere (10-12 Ampère) range.

Just before Neher’s postdoctoral move to the University of Washington in Seattle and, later to Yale University, they succeeded in resolving single ion channel currents and the pair continued to liaise and published their results in 1976. Neher returned to the Max Planck Institute that year and he and Sakmann were invited to operate ‘Young Investigator Laboratories’, attracting postdoctoral fellows and perfecting and expanding their technique. It turned out, that ion channels are not restricted to nerve cells and other ‘excitable’ tissues. Rather, there are hundreds of different ion channel types, which subserve a variety of cellular tasks. Thus, their discoveries enabled the development of specific drug therapies for diseases such as diabetes, cystic fibrosis, epilepsy, and cardiovascular and neuromuscular disorders. Neher and Sakmann have received numerous awards, often shared, including the Gottfried Wilhelm Leibniz Prize, the highest honour awarded in German research.

Neher met his wife, Eva-Maria, in the laboratory, of course. They were married in 1978 and have five children. 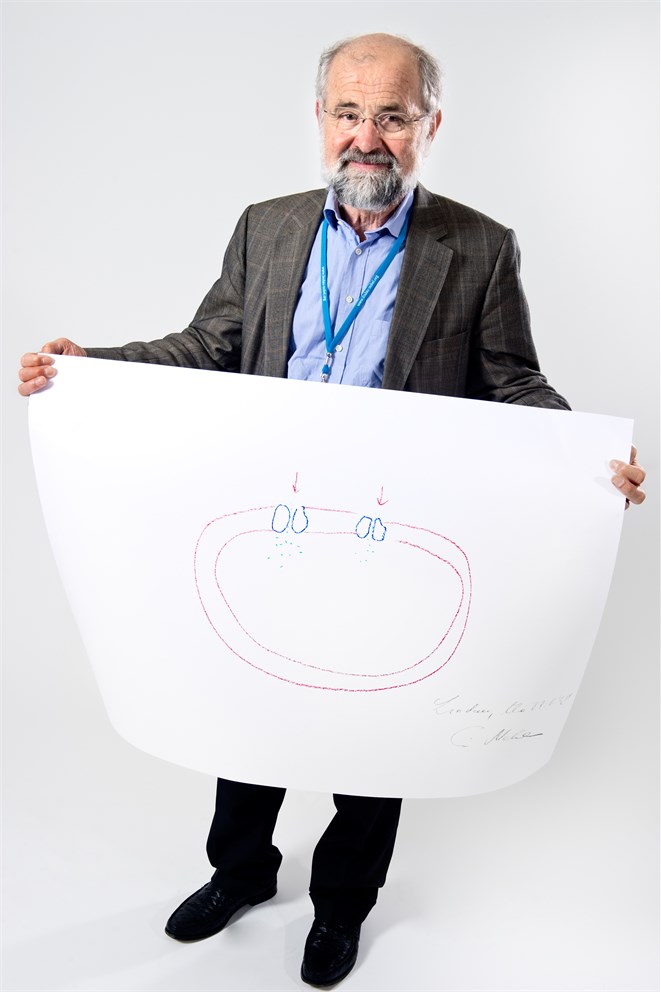 “So, I just draw this and thatʼs all?”
No, you will be photographed with your artwork, too!

The Gates of the Cell
By Adam Smith

As you focus your eyes on this page to read these words, the muscle contractions that direct your gaze and the nerve impulses that carry the signals from your eyes to your brain are all dependent on the flow of electricity. That flow is caused by the movement of charged ions into and out of cells and for this to happen, the cell walls have to become permeable. The question of precisely how such permeability changes occur was the problem that Erwin Neher and his colleague Bert Sakmann sought to tackle in the mid-1970s.
It was assumed that the ions entered and left the cell through specific channels spanning the cell’s outer wall, such as those shown at the top of Neher’s simple sketch of a roughly circular cell. When the channels open, ion fluxes would change the electrical potential difference between the inside and the outside of the cell. But nobody had been able to observe individual channels in action. Neher and Sakmann devised an ingenious method to study single channels; the patch-clamp technique.
Using a minute electrode, formed from a glass pipette with an opening of just a thousandth of a millimetre, they softly touched the surface of a cell. Applying gentle suction then caused a small patch of the cell’s wall to intrude into the pipette. Hopefully this patch contained just a single example of the channels they sought to find. If they were unlucky the patch contained zero channels, or too many channels, but gradually by adjusting the parameters they were able to record characteristic, tiny, step-like changes in current generated by the opening and closing of single channels.
The patch-clamp technique not only confirmed the existence of ion channels, but quickly gave researchers the tool they needed to uncover much of the detail of how such channels functioned. “I’m very proud that people use it and make very good things with the technique,” says Neher, “and it’s amazing in how many areas the improvement of the technique has its consequences.”
As for the simple drawing? “Of course, I could have added a pipette,” remarks Neher. “I could have added an amplifier.
I could have added a reference electrode, which you need for the measurement. So you can make it more complicated, but I think it’s good for a start.”