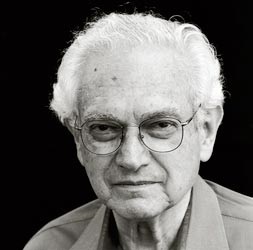 Born April 10th, 1927 in New York City, N.Y.; studied biology at the University of Florida; 1952, graduated in zoology; 1957, Ph.D. at the University of Michigan; then researched at the National Institutes of Health in Bethseda, Maryland; 1960, moved to the Section of Metabolic Enzymes; 1962, head of the Section of Biochemical Genetics in Bethesda.

Nobel Prize for Medicine 1968 together with Robert Holley and Har Gobind Khorana for their interpretation of the genetic code and its function in protein synthesis. Marshall Nirenberg already began investigating the relationships between DNA, RNA and protein in 1959; the findings from this work paved the way for cracking the genetic code.

Marshall Nirenberg passed away on 15 January, 2010.