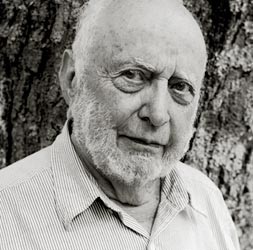 Douglass C. North, co-recipient of the 1993 Nobel Memorial Prize in Economic Science, has spent more than 50 years pondering complex variations of a simple question: Why do some countries become rich, while others remain poor? Born in Cambridge, Massachusetts, Professor North graduated with a triple BA degree in political science, philosophy, and economics from the University of California at Berkeley in 1942, and later, in 1952, received a Ph.D. degree in economics there. He served as a U.S. Merchant Marine from 1941 to 1946, and was an instructor in celo-navigation from 1944 to 1946.

He began his academic career at the University of Washington in Seattle where he spent 33 years as a member of the economics faculty, including a 12-year tenure as department chair and five years as director of the Institute for Economic Research. He was the Peterkin Professor of Political Economics at Rice University in 1979, Pitt Professor of American Institutions at Cambridge University in 1981, a Visiting Fellow of the Center for Advanced Studies in the Behavioral Sciences at Stanford University, and currently is the Bartlett Burnap Senior Fellow at Hoover Institution.

He joined the faculty of Washington University in 1983 as the Henry R. Luce Professor of Law and Liberty in the Department of Economics, and served as director of the Center in Political Economy from 1984 to 1990. He was president of the Economic History Association for one year, editor of the Journal of Economic History for five years and served 20 years as a member of the Board of Directors of the National Bureau of Economic Research. In 1987, he was elected to the American Academy of Arts and Sciences, and, in 1992, he became the first economic historian ever to win one of the economics profession’s most prestigious honors, the John R. Commons Award, which was established by the International Honors Society in Economics in 1965. He was elected a Fellow of the British Academy in July 1996, and installed as the first Spencer T. Olin Professor in Arts and Sciences at Washington University in October 1996.

Professor North has lectured at most major American and European, and many Asian universities. He is a frequent advisor to the World Bank and to countries throughout the world on issues of economic growth. He is the author of numerous articles and ten books. His research interests have included property rights, transaction costs, economic organization in history, a theory of the state; the free rider problem; and have focused on the formation of political and economic institutions and the consequences of these institutions on the performance of economies through time. That research was published by Cambridge University Press in Institutions, Institutional and Economic Performance. Currently he is deeply involved in the new and growing branch of economics called institutional economics which draws heavily on his work and that of fellow Nobel laureate Ronald Coase. During the past several years, Professor North has begun to use insights from cognitive and behavioral science to better understand economic change over time. His most recent research is set forth in his current book titled Understanding the Process of Economic Change, Princeton: Princeton University Press, 2005.