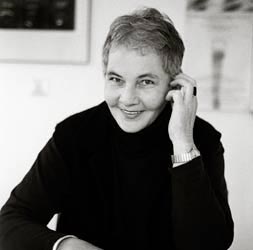 Christiane Nüsslein-Volhard is a German geneticist who, with Americans Eric Wieschaus and Edward Lewis received the Nobel Prize in Physiology or Medicine for their discoveries concerning the genetic control of early embryonic development. Using the fruit fly, Drosophila melanogaster, Nüsslein- Volhard and Wieschaus identified the genes that are important in determining the body plan and the formation of body segments. Genes homologous to those in the fruit fly also control human development.

Nüsslein-Volhard was born in Magdeburg in 1942, as the second of five children and grew up in post-war austerity in Frankfurt. By the age of 12 Christiane knew she wanted to be a biologist and was an eager, if erratic, school pupil. After a one-month course as a nurse in a hospital, she confirmed her suspicions that research, not medicine, was the field for her, and went on to study biology at Frankfurt University. In 1964 she transferred to Tübingen, to study biochemistry and, in her final year, microbiology and genetics.

For her thesis at the Max-Planck-Institut für Virusforschung in Tübingen, she did molecular biological studies on bacterial transcription, but by the end of her thesis in 1973 got interested in developmental biology and genetics. She settled on Drosophila as a suitable subject for a postdoctoral project on developmental genetics and in 1975 joined Walter Gehring’s laboratory in Basel. In the two years in Basel, followed by a year in Freiburg with the insect embryologist Klaus Sander, she discovered and investigated two mutants that were affected in the spatial organisation of the fly embryo. In 1978 she presented her work at the annual symposium of the American Society of Developmental Biology in Madison.

From 1978–80 both she and Wieschaus worked at the European Molecular Biology Laboratory in Heidelberg. They used mutagenic substances to induce mutations on a large scale and discovered 120 genes controlling early embryonic development. They described 15 genes that affected the segmentation of the fly larva, published in Nature in 1980. In 1981 she returned to Tübingen, where, in 1985, she became director of the Max Planck Institute of Developmental Biology. Her research group discovered several morphogenetic gradients in the Drosophila embryo. In the 1990ties, she performed systematic genetic studies on the embryonic development of Zebrafish, that developed into a preeminent vertebrate model organism for biomedical research. Her recent work focusses on the genetics of colour pattern formation in Zebrafish.

She has published about 200 original papers and several books. She received a number of awards and honours, among them the Lasker Award and the Gottfried Wilhelm Leibniz Prize – the highest honour in German research.

She was secretary general of the European Molecular Biology Organisation (EMBO), member of the Senate of the Max Planck Society, the National Ethics Council of Germany and several advisory boards and committees and from 2005 -2012 founding member of the Scientific Council of the European Research Council (ERC). Since 2013, she is chancellor of the German Order Pour Le Mérite. In 2004, Christiane Nüsslein-Volhard founded the CNV-Foundation to support women in Science with children.

This is one of the very few female Nobel Laureates. She doesnʼt appear to think very highly of my project. She told me “It would have taken up more of my time to get rid of you than to just do the drawing and the pictures!” (That is the most dubious compliment I have ever got). During the shoot, things get easier. She turns out to be a great woman, with colourful shoes. Her drawing is perfect. It did not surprise me to learn that she illustrates her books herself.

Not Just Looking, but Seeing
by Adam Smith

You’re looking at a fly family portrait. The female is on the left, and the male on the right, and below them, in what looks like a campfire, are the fly eggs and maggots (the red ‘flames’ are in fact meant to be arrows highlighting what is underneath them). It’s a closely-observed drawing; the female has a pointed abdomen and four segments, while the male has a round black ending of the abdomen and some extra bristles on the fore leg, which are supposed to be required to grab the female. “I don’t know whether this is true,” says Christiane Nüsslein Volhard, “that is not what we investigated.”

Fly embryos develop segments as they grow, and by the time they are maggots, seen here crawling off in all directions, they normally have eleven segments. Fly embryos that develop fewer segments are unable to crawl out of the egg, and such underdeveloped embryos are seen in the eggs at the centre of the picture. Nüsslein Volhard and her collaborator Eric Wieschaus set out to discover what genes control the segmental patterning seen during fly development. To do this, they bred from hundreds of thousands of flies subjected to random mutagenesis, collected the embryos on dishes coated with agar jelly made from apple juice (as seen at the bottom right of the picture), and looked for alterations in the resulting embryos.

This method allowed Nüsslein Volhard and Wieschaus to identify genes of critical importance for segmental patterning and the determination the body plan. Their work revealed that a surprisingly small number of genes were involved and led to the award of the Nobel Prize, which they shared with Edward Lewis.

“When we studied biology we always had to draw,” says Nüsslein Volhard. “We had to look at the microscope and then make a drawing. If you make a drawing you must recognise things, if you make a photograph you don’t have to recognise things. The whole world is full of people pointing mobile phones at things, whether they are looking at them or not is another question.”