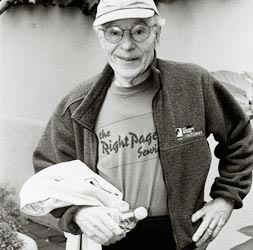 Nobel Prize in Physics 1978 together with Pyotr Kapitsa and Robert Woodrow Wilson
"for their discovery of cosmic microwave background radiation".

Arno A. Penzias is an American physicist, born on April 26, 1933 in Munich, Germany, who won the Nobel Prize for physics in 1978 for the discovery of the cosmic microwave background (CMB). Of jewish descent, Penzias was sent to England with his brother as part of the Kindertransport in 1939, just before the outbreak of World War II and was later joined by his parents. After less than a year, the family moved on to New York City. In 1946, Penzias became a citizen of the United States and the next year began attending Brooklyn Technical High School. He then enrolled at the City College of New York, a tuition-free, municipally-supported institution, with a major in chemical engineering. By the end of his freshman year he had switched to physics and graduated at the top of his class in 1954.

Before continuing his education, Penzias spent two years in the U.S. Army Signal Corps, an experience that would benefit him later. Beginning at Columbia University in 1956, his army experience helped him become an assistant in the Columbia Radiation Laboratory under the direction of Isidor Rabi and Charles Townes where he worked with microwaves. Townes, known for his development of the maser several years before, then became Penzias’ Ph.D. advisor for a project concerning the development of a maser amplifier for a radio telescope to determine hydrogen quantities in galaxy clusters. Looking to build on his thesis, which he completed in 1961, Penzias was offered and accepted a permanent job at Bell Laboratories in Holmdel, New Jersey.

Originally intending to use the 20-foot large horn-reflector antenna at Holmdel for his work, Penzias was soon forced to reconsider. At the time, the antenna was set to receive signals from the Echo balloon satellite so he chose to use a smaller antenna and investigate the interstellar OH molecule, fundamental research considered to be pushing the technical bounds of radio astronomy. During his investigation, his calculations led him to estimate the radiation temperature of space (at a radiation wavelength of 18 cm, he estimated a temperature of 2 K). Part of his reasoning was his based on the presence of the first rotational excited state of the CN molecule in interstellar space. This information alone actually suffices to confirm the existence of a CMB. However, neither its discoverers nor Penzias himself realized this. The path to the discovery of the CMB was a circuitous one.

Soon after, in 1963, at the same time that the large horn telescope became free to use, Robert Wilson was hired out of the California Institute of Technology and the two men set to work converting the telescope for use in radio astronomy. The sensitivity of the instrument was well-known to them and they were careful that their modifications did not compromise the equipment. After completion, their modifications allowed for corrections for local radio noise from earth as well as from the apparatus itself and enabled absolute measurements of celestial objects. Calibration also involved reference background temperature measurements and this time the heightened sensitivity allowed the scientists to realize that a component of the background could not be accounted for by known sources.

The temperature of an astronomical source is determined by its thermal noise power. The paradigmatic example of thermal noise is a hot resistor, which has a non-zero root-mean-square noise power associated with the thermal motion of the electrons producing the current through the resistor. Such a hot resistor, in fact, is often used to calibrate the radiation detector, which is called a radiometer. Astronomical sources produce the same temperature-dependent thermal noise and the associated temperature can be obtained through the Johnson-Nyquist theorem:

where P is the thermal noise power from the source in the measured bandwidth, B, T is the absolute temperature and k is Boltzmann's constant. In this way all observed objects can be considered resistors placed across the field of view with an associated absolute temperature. However, the temperature received by the antenna is different than that recorded by the radiometer because of effects from the telescope itself. The better one understands this process for a specific piece of equipment, the more accurately the actual noise power can be deduced.

Because the error inherent in previous radio astronomy equipment had been around 3K (about the magnitude of the CMB) possible earlier detections of the microwave background, for example by Edward A. Ohm in 1961, had been overlooked. But Penzias and Wilson were able to reduce this error to less than 2 K. Their initial measurements of radiation from empty parts of the sky resulted in a temperature of 7.5 K. However, these measurements should only have contained contributions from the atmosphere and the antenna itself, to which a maximum combined temperature of about 3.3 K could realistically be attributed. The two men, thus, embarked on an exhaustive re-assessment of the radio telescope as well as additional testing and recalibration. Terrestrial and cosmic sources were again scrutinized and even a pair of pigeons was removed from their roost inside the telescope. Although they were able to slightly reduce the discrepancy between the expected and measured background temperature, the two could not reconcile the difference without further physical considerations of exactly what was being measured.

In their Nobel Prize-winning article [A.A. Penzias, R.W. Wilson, Astrophysical Letters 142 419-421 (1965)], Penzias and Wilson report this effective measurement of the zenith noise temperature at 4080MHz (a wavelength of about 7cm) to be 3.5K higher than expected. Together with a theoretical article by Robert Dicke, Jim Peebles, Peter Roll and David Todd Wilkinson immediately preceding the Penzias/Wilson article in the same journal, the excess temperature was interpreted to be relic radiation (CMB) from the epoch of recombination when the universe was approximately 378,000 years old. During this period the universe cooled enough to allow electrons to combine with protons to form hydrogen and the photons which previously interacted strongly with the plasma decoupled from matter and remained as the CMB. In fact, Dicke’s team was in the process of building equipment to search for exactly this radiation signal and had already completed theoretical work describing the phenomenon. Although somewhat deflated by being scooped, they nonetheless played an important role in accurately interpreting the newly found cosmic signal.

The discovery of the CMB has often been described as “serendipitous,” with good reason. At the time, the Big Bang cosmological model was not as prominent as it is now. Whether the CMB was measurable or even if it existed was not at all settled and in many cases far off the radar of many mainstream scientists. The complicated story of how the CMB was found helps to explain why it was actually detected earlier than 1965, for example by Andrew McKellar and Gerhard Herzberg in 1941 or by Tigran Shmaonov in 1957, without anyone realizing it.
Early estimates of the background temperature of space date back at least to C.E. Guillaume in 1896 (5.6 K) and Sir Arthur Eddington in 1926 (3.18 K). However, most of these early calculations clearly described the ambient temperature in space as due to the radiation from the fixed stars and was not a calculation of what we refer to now as the CMB. This becomes immediately obvious, when one considers that only in 1929 did Edwin Hubble show that the velocities of extragalactic nebulae increase proportionally to their distance from the observer, establishing that there was a universe outside of our galaxy which may be expanding.

In the 1920s, the expanding universe scenario was supported by several scientists, including Hubble, Alexander Friedman and Georges Lemâıtre. However, another description of the universe, steady state cosmology, was also widely accepted. Here, new matter is created as the universe expands so that the universe essentially remains unaltered in appearance.
In the decades that followed, the nature of the universe was explored further. One telling report came from Herzberg in 1941 on an analysis of data from McKellar on interstellar CN molecules. McKellar had observed emission from the first excited rotational state of CN, a state apparently populated by collisions with radiation or other particles. Herzberg reasoned that the first excited state corresponded to a temperature of 2.3 K although he did not make the leap to connect this with ambient conditions in space. However, we have already seen how this discovery influenced Penzias’ early career. In the late 1940s, more profound ideas began to surface. In 1948 Fred Hoyle, Thomas Gold and Hermann Bondi again renewed interest in the steady state model which continued to be looked at as the more serious choice. Although somewhat on the fringe, George Gamow, Ralph Alpher and Robert Herman began to interpret atomic abundances based on the Big Bang scenario and neutron capture cross sections with some initial success, although their theories were later amended as it became apparent that they could only account for nuclei with atomic mass less than five. However, their considerations led them to make crucial assumptions about the early universe, one of these being the existence of a period of recombination and decoupling of radiation and matter resulting in the CMB. In 1948 and 1949, Alpher and Herman made a first estimates of about 5 K for the temperature of such a background. Over the following decade and a half Alpher, Herman, Dicke, Gamow and others made a series of further estimates of this temperature which varied widely from 3 to 50 K, however, none of these results made much of an impact at the time. Finally in 1964, A.G. Doroshkevich and Igor Novikov claimed concretely that the CMB is indeed a detectable phenomenon with the emission spectrum of a blackbody.

One year later Penzias and Wilson published their discovery which lead to the acceptance of the Big Bang over the steady state model. Although it was not immediately obvious that the CMB had a black body spectrum, first rough estimates of the spectral shape could confirm that it did not originate from any known radio source. And it would be some time before the exact black body spectrum was obtained. In his Nobel lecture in 1978, Robert Wilson showed a set of individual CMB measurements confirming the black body temperature to be very near 3K, but not until the COBE experiment in the early 1990s was the temperature accurately measured to be 2.736 K ± 0.017 K and the spectrum fitted to curves predicted by the standard Big Bang cosmological model. The COBE experiment also led to the first evidence of anisotropies in the CMB at the level of 1 in 100.000, which explains why matter is clumped into galaxies in the universe. In the decades since, continued study of the CMB, the discovery of which marks the beginning of cosmology as an exact science, has lead to a wealth of other conclusions about the nature of the universe. The 2006 physics Nobel Prize was given for the study of the anisotropies found during the COBE era, and the more recent Wilkinson Microwave Anisotropy Probe and European Planck satellite have yielded new results in just the last several years.

After the CMB discovery, Arno Penzias first took up research not pertaining to radio astronomy before finally returning to the field in the late 1960s and 1970s and worked on detecting cosmic radiation in the millimeter wavelength band (again with Wilson). He continued to aid Bell Labs in scientific managerial roles (which, as he puts it, eventually brought his personal research in astrophysics to an end), was elected to the American Academy of Sciences in 1975 and has been involved in many other scientific organizations as well as in venture capital and growth equity investments.

In 1954 he married Anne Pearl Barras with whom he had three children.