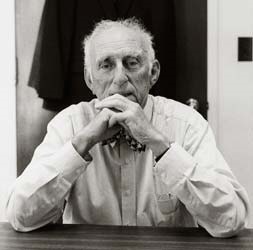 I work as a Professor in experimental physics, as an engineer and as a science educator at the Stanford Linear Accelerator Center of Stanford University. I was born in Brooklyn, New York in 1927 and attended New York City schools, including James Madison High School in Brooklyn, New York. My parents were both immigrants from Poland. I took the physics course at James Madison and at graduation received the Physics Medal. But neither I nor my family knew if one could “make a living” in physics. Therefore I decided to become an engineer. In 1942 I began to study chemical engineering at the Polytechnic Institute of Brooklyn, now Polytechnic University.

After several years with the General Electric Company I decided to go into physics. I went to graduate school in physics at Columbia University, receiving a Ph. D. in 1955. From 1955 to 1963 I did research and taught at the University of Michigan. Since 1963 I have been at the Stanford Linear Accelerator Center of Stanford University where I am a Professor of Physics. My major research interest is experimental elementary particle physics; other research interests are optical devices, electronic devices, and liquid drop technology. I also work in the application to industrial processes and products of these physics technologies.

Honors include: the 1995 Nobel Prize in Physics, the 1982 Wolf Prize in Physics, membership in the U. S. National Academy of Sciences and the American Academy of Arts and Sciences, and honorary degrees from Polytechnic University in 1996 and the University of Chicago in 1990. The 1995 Nobel Prize in Physics was in recognition of my discovery of the tau lepton, the heaviest known member of the electron-muon-tau sequence of charged leptons. This work also led to the discovery of the third generation of elementary particles. 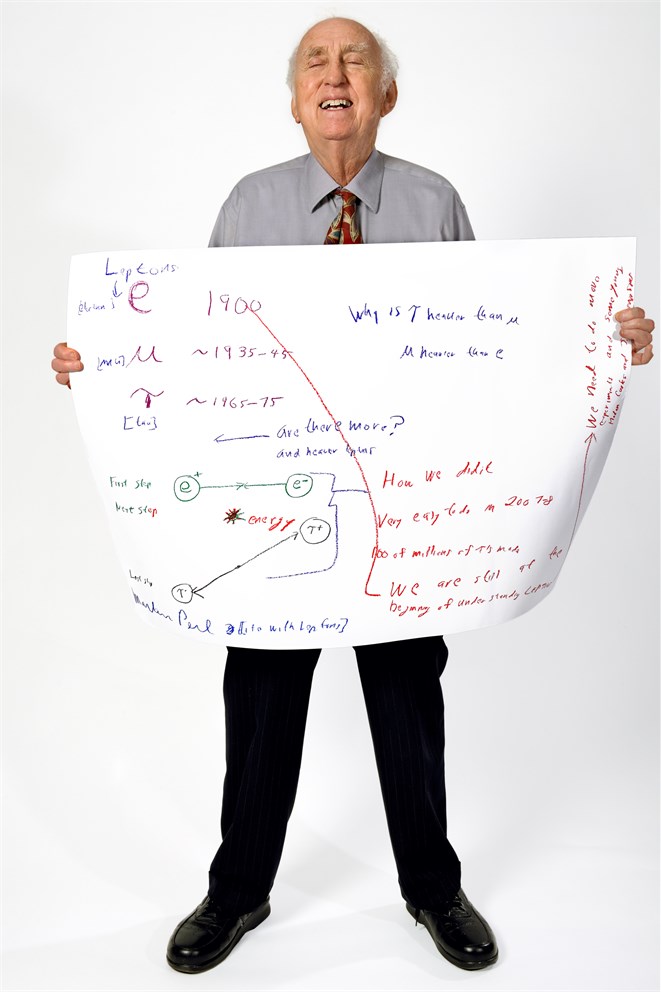 Martin (better known as “Marty”) Perl is very serious about this
photo project. Glasses off , and a bit of make-up on. No problem! His
drawing is carefully executed, and there he stands:
Legs apart, drawing in hand.

The Mystery of Mass
by Adam Smith

Marty Perl’s drawing encompasses a lot: a history of the discovery of leptons, a description of his key experiment, and a challenge for the future. When Perl came upon the research scene in the early 1960s, there were two so-called ‘leptons’ known, the electron and the muon. As he shows top left, the electron had been the first elementary particle to be discovered, by J.J. Thomson back in around 1900. Then a second, related but much more massive particle, the muon, had been discovered in cosmic rays in the late 1930s. It occurred to Perl that it was bizarre to have a pair of particles with such unequal masses, and that the electron and the muon must in fact represent the first two members of a series of particles of increasing mass. So he decided to go looking for a still heavier lepton.

The opening of the new SPEAR electron-positron collider at Stanford in the early 1970s gave Perl the opportunity he needed. Smashing electrons and their antiparticles, positrons, into each other at enormously high energies (as shown by the green converging arrows in the middle of the sketch) can lead to the generation of heavier particles. It wasn’t long before Perl had evidence for the heavier member of the lepton family whose existence he had predicted, which he named tau (τ). But to his surprise, no more members of the series came to light. So far, there appear to be just these three members of the family: the electron, the muon, and tau.

Intriguingly, nobody knows why there are only these three. The reason may lie in the answer to the question Perl asks towards the top right of his sketch: “Why is τ heavier that μ, μ heavier than e?” What actually sets the mass of a particle is still, Perl points out, a mystery. At the bottom of his sketch he writes in red, “We are still at the beginning of understanding leptons,” and then goes on, in the upper right hand corner, to stress the need for more experiments and more young minds to tackle the problem. Reflecting on his sketch, Perl comments, “There is a whole tradition in physics of very hard problems being set aside. Future generations will have to come back to it.”