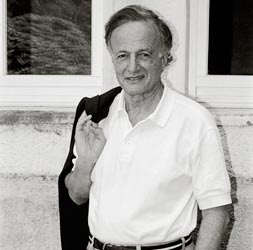 Man has dabbled in chemistry for centuries, yet it is only relatively recently that he has been able to observe the physics involved in chemical reactions. The 1986 prize in chemistry was awarded to Dudley Herschbach (Harvard), Yuan Lee (Berkeley, California) and John Polanyi (Toronto) for their contributions concerning the dynamics of chemical processes which has helped develop a new field of research chemistry – reaction dynamics.
All atoms are in perpetual motion, and collisions occur continuously. When this happens, redistribution of the atoms can take place, forming new ‘product molecules’, which means that a chemical reaction takes place. Herschbach and Lee both used crossed molecular beams to observe reactions. Polanyi developed an infrared chemiluminescence method. Product molecules often emit weak infrared light, which can be analysed to determine the nature of the reaction, effectively retracing the steps of the reaction in reverse.

Polanyi was born in 1929 in Berlin, Germany, of Hungarian parents who moved to England in 1933. He studied chemistry at Manchester University, where his father worked, gaining his BSc in 1949 and PhD in 1952, and promptly left for Canada for postdoctoral work at the National Research Council Laboratories in Ottawa (1952–1954) and at Princeton University, USA (1954–1956). Polanyi favoured the physics of chemistry, and felt physicists and chemists should combine forces, saying: “It was evident in the early 1950s that the time was ripe for a melding of these view-points.”

In 1956, he was appointed as a lecturer at the University of Toronto where he rose to professor in 1962. It was there in 1956 that he and student Ken Cashion retraced the motion of hydrogen chloride molecules to the reaction of hydrogen with chlorine – a strongly exothermic reaction (it gives off heat energy), suggesting there must be vibration and rotation in the HCl molecule, with some energy reserved for the translation of the elements. By quantifying this three-way split of the reaction energy they discovered that HCl was formed by a highly specific motion, providing for the first time information concerning the distribution of energy among the products of a three-centre reaction. Polanyi has served on numerous scientific boards and advisory committees in Canada, US, Britain, Germany and Japan, as well as several human rights and disarmament groups. He was a founding member of The Royal Society of Canada Committee on Scholarly Freedom and the founding chairman of the Canadian Pugwash Group in 1960. Among many honours, awards and degrees, he was made an Officer of the Order of Canada in 1974, and a Companion of the Order of Canada in 1979.