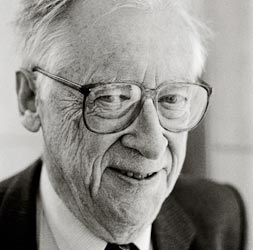 
Born in Burnham-on-Sea, UK, on October 31, 1925. After studying mathematics in Cambridge, England, he obtained his Ph.D. in mathematics at Trinity College, Cambridge, in 1951.

Pople began his career as a research scientist at Trinity College in Cambridge in 1951, teaching mathematics between 1954 and 1958. During the summer months of 1956 and 1957, he also worked as a research assistant for the National Research Council in Ottawa, Canada. Between 1958 and 1964, Pople was superintendent of the Basic Physics Division at the National Physical Laboratory in Teddington. After he had held a guest professorship at the Carnegie Institute of Technology in Pittsburgh, PA, in 1961/62, which had been funded by the Ford Foundation, he was appointed professor of chemical physics by the Carnegie Melon University in Pittsburgh in 1964. In 1967, he headed the Department of Chemistry, and between 1974 and 1993 held the John Christian Warner University Professorship for Sciences. Since 1993, he has worked as a Trustees' Professor for Chemistry at Northwestern University in Evanston, Illinois.

Pople's most important scientific achievements include his development of simulation software for complex quantum physics calculations, for which the American physicist, Walter Kohn, had supplied the basis. Despite is sophisticated simplification, Kohn's method of computing energy density as a basis of modern density functional theory became accessible to many scientists only after computer technology had advanced. Pople played a leading role in the development of computer-assisted methods. In 1970, he published "GAUSSIAN-70," the first version of a code for calculating complex processes in quantum chemistry. However, it took until the nineties for the code to be developed to a stage where Kohn's density functional theory could be incorporated. Now it allowed chemists to determine the structure and electron density of a molecule in a short period of time by means of a software package. It also became possible to compute the course of a chemical reaction from its initial structure up to its final structure.

The Nobel Prize for Chemistry was awarded to Pople together with Walter Kohn in 1998 in recognition of their outstanding contributions to the computation of the properties of molecules. In this way, chemistry had made the transition from a mostly experimental to a "calculable" branch of science.