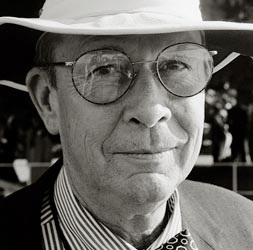 Robert Coleman Richardson is an American physicist who, with David Lee and Douglas Osheroff, received the 1996 Nobel Prize in Physics for their discovery of superfluidity in the isotope helium-3 (3He). Superfluidity occurs in certain elements when the temperature sinks almost to absolute zero, –273 °C. Instead of moving independently, the atoms move in a coordinated manner, causing the liquid to lose all inner friction. Superfluids are also known as quantum liquids, as they are governed by the quantum laws of microphysics. This allows scientists to study directly the quantum mechanical effects that previously could be studied only indirectly in molecules, atoms, and subatomic particles.

Richardson was born in Washington, DC in 1937 and grew up in Arlington as a keen scholar and eagle scout. He led nature rambles, learning birdsong and descriptions so he could describe plumage despite being colour blind. He attended Washington-Lee High School but recalls the science courses being old fashioned: “The idea of a ‘photon’ was said to be controversial. This in 1953! I was taught that absolute zero is the temperature at which all motion stops. It is most fortunate that the statement was wrong. Otherwise 3He could not become a superfluid.” In 1954 he entered Virginia Polytechnic Institute. Initially he studied electrical engineering, became bored and tried chemistry but found his colour-blindness too much of an obstacle. He ended up majoring in physics, working during the summer at the National Bureau of Standards.

After graduating he stayed on at VPI for a year to gain an MSc before entering military service in the ordnance corps. Due to cutbacks, however, his service was reduced to six months and in 1960 Richardson returned to gain a PhD in physics, applying to work with Horst Meyer on low temperature physics at Duke University in Durham, North Carolina. Richardson flourished at Duke, and met Betty McCarthy, whom he married in 1962. Richardson received his PhD in 1965 and joined the faculty of Cornell University in Ithaca, New York, in 1966, becoming director of the atomic and solid-state physics laboratory in 1990. He served as Vice Professor for Research at Cornell University between 1998 and 2007.

At Cornell he joined David Lee and John Reppy on very low temperature helium research. In 1972, Richardson and Lee were senior researchers investigating low temperature 3He, and had cooled a sample to within a few thousandths of a degree above absolute zero when Osheroff, a graduate student, noticed small jumps in the internal pressure. This turned out to be a phase transition to superfluidity. These phase transitions in 3He have since been used to investigate the notion of cosmic strings, which have relevance for the Big Bang theory.