Burton Richter, at Stanford Linear Accelerator Center, shared the Nobel Prize in Physics with Samuel Ting, at MIT, for their independent work in the discovery of a new kind of heavy elementary particle. The controlled collision of electrons and positrons could theoretically produce a heavy particle, albeit briefly, as it rapidly decays. In November, 1974, the Richter team happened upon the precise collision energy required to make a new particle, named ‘psi’, which survived longer than it should. Ting’s experiment was slightly different, bombarding a beryllium target with protons, but on November 11, Richter and Ting met at Stanford and found that the two teams had discovered the same particle. Although many elementary particles have been discovered, they are related in groups or families. The J/psi particle formed a new family, and suggests the existence of a fourth kind of quark.

Richter was born in New York City in 1931. He had an early interest in chemistry and physics and in 1948 entered the MIT, where he opted for the latter discipline, working mainly under Francis Bitter. For an experiment he made short-lived, radioactive mercury isotopes at the MIT cyclotron and grew interested in nuclear and particle physics. He completed his PhD in 1956 on the photoproduction of pi-mesons, under LS Osborne. Richter then joined Stanford’s High-Energy Physics Laboratory and in 1957 teamed up with GK O’Neil, WC Barber and B Gittelman to build the first colliding beam machine that greatly increased the range of electron-electron-scattering experiments.

In 1963 he was invited to join the Stanford Linear Accelerator Center (SLAC) to design a high-energy electron-positron machine. Funding finally came through in 1970, and the SPEAR machine was built. In 1973 the experiments began, and led to the Nobel Prize discovery a year later. Richter spent 1975-76 at CERN, Geneva and began a study that eventually led to the LEP (Large Electron-Positron) project at CERN in the 1980s. Back at Stanford in 1978 he worked with AN Skrinsky and M Tigner on the basis design of a linear colliding beam machine which could in principle go to higher energy than a storage ring. The SLAC group began the design of a conversion of the two-mile-long SLAC linac into a linear collider. Work began in 1983, and was finished in 1987. The first physic experiments began in 1990 after a difficult start up. Richter became technical director of SLAC from 1982-84, and then director from 1984-99. He was a member of the DOE’s Nuclear Energy Advisory Committee and chaired its fuel cycle subcommittee from 2000 to 2013 and was a member of the first PCAST Review Panel for the National Climate Change Assessment. Richter was also the Paul Pigott Professor of Physical Sciences Emeritus at Stanford University.

After stepping down as laboratory director in 1999, he was still involved with energy, environment, and sustainability issues, particularly those involving new energy sources free of greenhouse gases. He served on the board of advisors of Scientists and Engineers for America, promoting sound science in government. Richter married Laurose Becker in 1960. They had a daughter and a son. 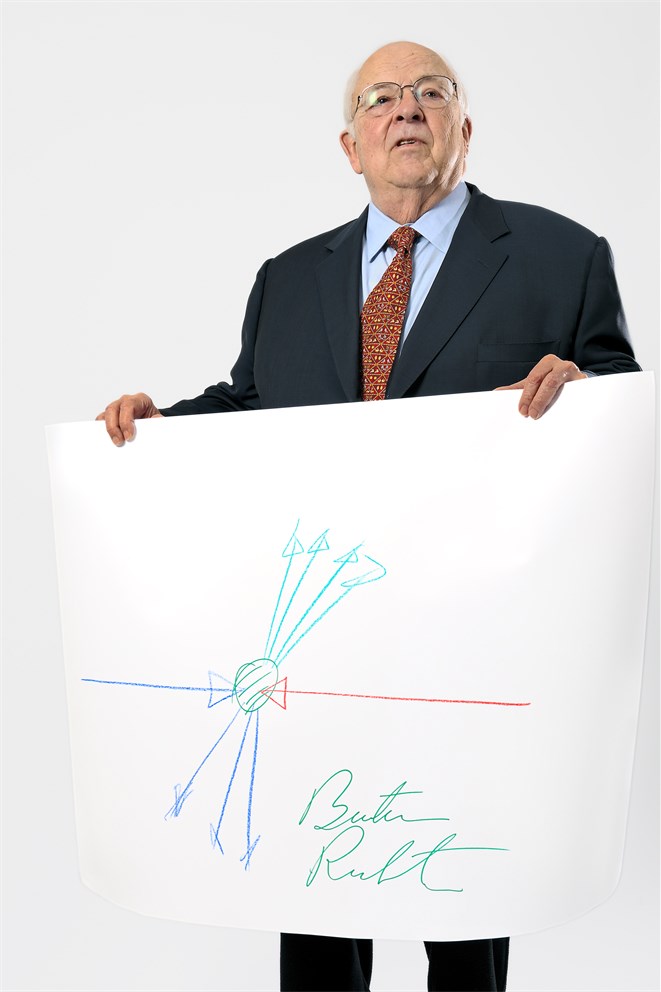 He says I can take his picture, but only from the waist up! (He’s wearing
sweatpants.) I wonder how I will get his horizontal drawing into a vertical picture.
(Atomic particles, it seems, fly in landscape format.)
I ask him how he got into science. “I wanted to understand how the universe
works!” Hey, are you kidding? “No,” he says. In his childhood it was still possible
to experience starry nights in New York City.
Thatʼs inspiration!

Birth of the November Revolution
by Adam Smith

“What I did,” says Burton Richter, “is I found something that wasn’t supposed to be there.” That ‘something’ was a new elementary particle, that Richter named ‘psi’ (ψ), whose existence had not been predicted by the accepted models of particle physics in use at the time. At the same moment as Richter discovered ψ, another team headed by Samuel Ting also discovered a new particle, which they named ‘J’. Meeting in Stanford, California, on 11th November 1974, Richter and Ting realised that they had discovered the same thing. Their joint announcement of the finding of ψ /J was so extraordinary and unexpected that it heralded what is generally known as the ‘November Revolution’ in particle physics, necessitating the revision of previous theories. When relating the discovery and its effects on the physics community to public audiences, Richter says he often quotes an old children’s nursery rhyme: “One day upon the stair, I found a man who wasn’t there. He’s back again today, I wish that he would go away.”

Richter and Ting, who shared the Nobel Prize just two years after those discoveries, used very different experimental set-ups to reveal their particles. Richter’s approach, as he has illustrated here, was to crash a particle and an antiparticle (electrons and positrons) into each other at very high energies, as shown by the converging red and blue arrows coming in from the left and right in Richter’s dramatic sketch. According to Einstein’s law relating energy and mass, E=mc2, large amounts of kinetic energy can give rise to heavy particles, so Richter was looking to see what particles emerged from these collisions. “I always think of it as the particle and anti-particle annihilating and creating a tiny fireball,” he says, “and from that fireball all sorts of other particles can be born.”

Describing the environment in which the discovery of ψ/J was made, Richter recalls: “The scientific community knew that the earlier version of the Standard Model was incomplete. They didn’t know how to fix it and there were all sorts of other notions. What this discovery did is it got rid of all the weeds. All the other notions that were there, that didn’t fit this, were put away and the one theory extension that did allow this has become the new Standard Model. And we’re still trying to find out what’s wrong with that!”