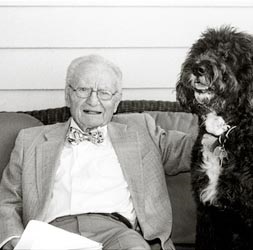 Paul A. Samuelson is Institute Professor Emeritus at the Massachussetts Institute of Technology and Sendai Bank Visiting Professor of Political Economy at New York University's Stern School of Management. He studied at the University of Chicago and Harvard and received the Nobel Prize in Economics in 1970.

Professor Samuelson was an economic advisor to Presidents Kennedy and Johnson, and has been a consultant to the Federal Reserve, U.S. Treasury, and the Congressional Budget Office. He was an early contributor to the new modern theory of finance, and has served as a Trustee of TIAA-CREF. He now serves on the Finance Committee of the National Academy of Sciences.

Aside from having authored a best-selling introductory economics textbook, ECONOMICS (1948, 2004), translated into more than forty languages, he wrote "Foundations of Economic Analysis" (1947; enlarged edition edition 1983). Five volumes of "The Collected Scientific Papers of Paul A. Samuelson" (1966-1986) have appeared and sixth and seventh volumes are in preparation.

With Prof. Robert Solow and other joint authors he has contributed to several dozen books on economic theory and policy.