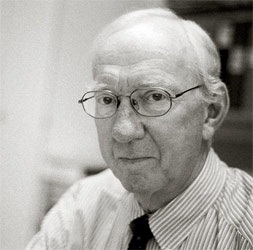 Bengt Ingemar Samuelsson was born on 21 May, 1934, in Halmstad, southwest Sweden, and after a standard education went on to study medicine at the University of Lund where he met his wife Karin (they had one son and two daughters). It was also there that he met Sune K. Bergström (one of his professors) with whom he worked on their Nobel-winning project, investigating prostaglandins – a family of natural compounds that influence blood pressure, body temperature, allergic reactions, and other biological functions in mammals. Acting as a control system for cells, they offer endless possibilities for manipulation by scientists in drug development.

After graduating, Samuelsson continued his studies at the Karolinska Institutet, Stockholm, gaining doctorates in biochemistry in 1960 and medicine in 1961, before heading to America to spend a year as research fellow in the Department of Chemistry at Harvard University. In 1962 he returned to the Karolinska Institutet as a member of the faculty, and rejoined Bergström in research on prostaglandins – a project they had begun in 1959. They soon determined the molecular structure of a prostaglandin for the first time, and in 1964 they announced that prostaglandins are derived from arachidonic acid, an unsaturated fatty acid that is found in certain meats and vegetable oils. Samuelsson subsequently determined how arachidonic acid combines with oxygen to eventually form prostaglandins.

In 1967 Samuelsson was appointed professor of medical chemistry at the Royal Veterinary College in Stockholm, but after a few years moved back to Karolinska Institutet to become professor and chairman of the department of physiological chemistry. In the 1970s he discovered several new prostaglandins, including thromboxane, which is involved in blood clotting and the contraction of blood vessels and has uses in several medical areas, particularly in thrombosis, inflammation and allergies. Alongside his research positions Samuelsson held administrative posts. In 1978 he succeeded Bergström as dean of the medical faculty and was later made rector of Karolinska Institutet.

Samuelsson became a member of the Royal Swedish Academy of Sciences in 1981 and served as Chairman of the Board of the Nobel Foundation 1993–2005. As testimony to his work, it is estimated that 3,000 scientific papers per year are published that refer to “prostaglandins,” or related terms in their titles. In 1982 Samuelsson and Bergström were awarded the Nobel Prize in Physiology or Medicine (shared with Englishman John Robert Vane, working independently on related material) “for their discoveries concerning prostaglandins and related biologically active substances”.