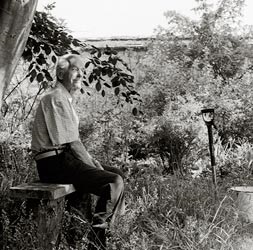 Sanger was born at Rendcombe in Gloucestershire, in 1918, and was educated at Bryanston School in Dorset and at St John's College, Cambridge, where he gained a BA in natural sciences in 1939 As a Quaker, Sanger was a conscien­tious objector during the war so he stayed at Cambridge to study amino acid metabolism under Albert Neuberger. After his PhD in 1943, Sanger started working on identifying the free amino groups in insulin. In the course of his work, Sanger figured out ways to order the amino acids and was the first person to obtain a protein sequence. Sanger thus proved that proteins were ordered molecules and therefore the genes and DNA that make these proteins should have an order or sequence as weil. Sanger received his first Nobel Prize in Chemistry in 1958 for his work on the structure of proteins, in particular insulin.

In 1951 he became a member of the external staff of the Medical Research Council at Cambridge, rising to head of the Division of Protein Chemistry. In 1962 he moved to the new MRC Laboratory of Molecular Biology, together with Max Perutz's unit from the Cavendish Laboratory which included Francis Crick, John Kendrew, HE Huxley and Aaron Klug. Not surprisingly, he soon became interested in nucleic acids (RNA and DNA) which, although different than proteins, shared the same basic problem of 'sequencing', which Sanger feit could contribute much to the under­standing of living matter. He developed methods for determining small sequences in RNA, which led to the develop­ment of the 'dideoxy' technique for DNA sequencing around 1975. For this work he shared one of the two 1980 chemistry awards with American Walter Gilbert of Harvard University, who developed a different method to deter­mine the sequence of the nucleotide building blocks in DNA. The other prize went to Paul Berg at Stanford University, USA, for his studies of the biochemistry of nucleic acids.

In 1992, the Wellcome Trust and the Medical Research Council established the Sanger Centre, a research center for furthering the knowledge of genomes. Among other awards and honours, Sanger was awarded the Corday-Mor­gan Medal and Prize of the Chemical Society in 1951. In 1954 he became a Fellow of the Royal Society. He was named a Companion of Honour in 1981 and was made a member of the Order of Merit in 1986. In 1940, he married Margaret Joan Howe; they have two sons and one daughter. Sanger retired in 1983 to spend more time in his garden and "messing about in boats".