Brian Schmidt shares half of the 2011 Nobel Prize in Physics with his American colleague Adam Riess. The other half was awarded to Saul Perlmutter, also American, whose team was working in the same field. What the three men (and their associated teams) discovered was that the universe’s rate of expansion, far from slowing down as you might expect billions of years after the Big Bang, is actually accelerating. They confirmed a theory first considered by Albert Einstein in 1917 but which he dismissed as being so unlikely that he dubbed it his ‘greatest blunder’.

For his PhD thesis, under Robert Kirshner at Harvard, Schmidt mapped type II supernovae (exploding stars that can give off as much light as an entire galaxy) to measure the Hubble Constant – the accepted rate of expansion of the universe. Schmidt initially set out, with Nicholas Suntzeff, Adam Riess and others, to continue this work, expecting if anything to trace a deceleration in the expansion. Their work matched that of Saul Perlmutter’s team. But between them the rival teams found more than 50 supernovae whose light, based on ‘known’ calculations about the Big Bang, was dimmer than expected. With so many supernovae giving this unexpected reading the scientists realised the Universe must have, over the past 5 years, sped up in its expansion, rather than slowing down as expected.

This acceleration is thought to be powered by ‘dark energy’, which is thought to constitute about three quarters of the universe. The Schmidt and Perlmutter teams announced their results in 1998. Having reached the same conclusions independently, the corroborative evidence gave scientists a whole new universe of possibilities to explore.

Brian Schmidt was born in Missoula, Montana, USA in February 1967. When he was 13 the family moved to Anchorage, Alaska, where he attended Bartlett High School, graduating in 1985. Originally, Schmidt regarded astronomy as a hobby, but at the University of Arizona he gained bachelor degrees in physics and astronomy in 1989 before progressing to Harvard for his MA (1992) and PhD the following year.
At Harvard, Schmidt married economics student Jenny Gordon and, after serving as postdoctoral fellow at the Harvard-Smithsonian Center for Astrophysics, the couple moved in 1994 to her homeland of Australia. There Schmidt was granted funds by the Australian National University to help organise the international High-z Supernova Search Team. This team, in addition to Schmidt in Australia, included astronomers in Chile, the United States, and Europe.

Schmidt and his family live on a farm near Canberra and own the respected Maipenrai winery. He presented a bottle of his wine to King Carl XVI Gustaf of Sweden at the Nobel ceremony in Stockholm and declared it the official dinner wine at the Australian International Get-together at the 64th Lindau Nobel Laureate Meeting. 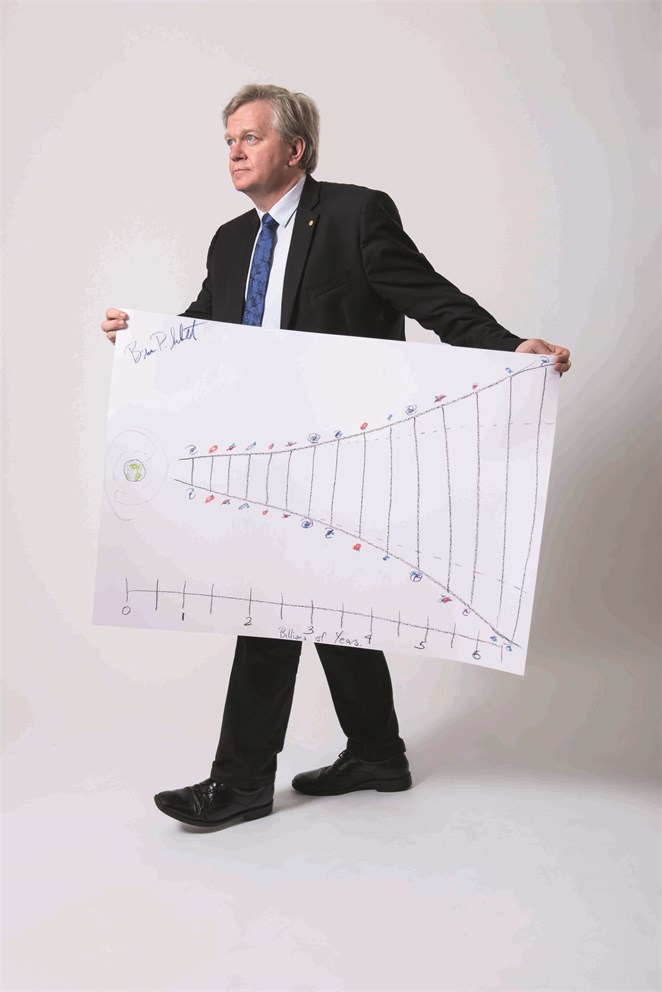 The universe is expanding – ever faster! Brian Schmidt comes in,
fixes his blue eyes on my crayons and starts sketching.
Schmidt is an extrodinary astronomer also in the sense that he uses
starlight not just to observe the universe, but also to grow wine in
his vinyard in Australia. He gave me a bottle – stellar!