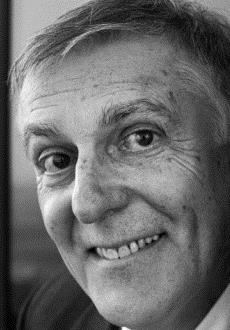 Nobel Prize-winning scientists are used to causing a stir, the nature of their work is often groundbreaking or contradicts accepted beliefs, but seldom has a laureate’s work been so poorly received as the discovery of quasicrystals by Dan Shechtman.

To make matters worse, most of the scorn and vitriol poured on Professor Shechtman’s work came from double-Nobel winner Linus Pauling, one of the most respected scientists in the world, who declared: “There is no such thing as quasicrystals, only quasi-scientists.” Pauling was wrong, but he went to his grave denying it.

Shechtman, with a background in mechanical and material engineering, was studying the metallurgical properties of rapidly-cooled alloys of aluminum and manganese. In April 1982, he noticed they produced electron diffraction patterns just as crystals do, but the patterns suggested an odd rotational symmetry which was inconsistent with the standard restricted patterns that effectively define a crystal. In normal crystals, atoms lie on three-dimensional lattices of identical cells, which are limited to 2-fold, 3-fold, 4-fold, and 6-fold degrees of rotational symmetry. In a quasicrystal, the local atoms are fixed, but each cell has a different configuration of cells nearby, giving them most often a 5-fold rotational symmetry in certain directions.

Shechtman persevered, and with colleagues Ilan Blech, John Cahn and Denis Gratias eventually got an article published in a technical journal in 1984. The effect was immediate, as a growing number of researchers succeeding in recreating the phenomenon, mostly using aluminium alloys.

Quasicrystals – or, as Shechtman would prefer, quasi-periodic materials – now have scientists thinking about matter in a new light, but they also have many possible practical applications. Because of their uneven structure, quasicrystals do not have obvious cleavage planes, making them unusually hard. This makes them ideal for making fine but durable instruments. Their low electrical and heat conductivity could also see them used for insulation or even a new non-stick coating for cooking pans.

Dan Shechtman was born in January 1941 in Tel Aviv in what was then the British Mandate of Palestine (now Israel). He studied at the Technion, gaining a BSc in Mechanical engineering in 1966, and MSc (1968) and PhD (1972) in materials engineering. After working in the aerospace research laboratory in the US as a metallurgist, he returned to the Technion as a member of staff in the materials science department (where he is currently professor). From 1981-83 he was on sabbatical at Johns Hopkins University in Baltimore and BS in Maryland. It was there, studying rapidly solidified aluminium alloys, that he made his discovery.

From 1992-94 he studied the effects of chemical vapour deposition on diamond at the US National Institute of Standards and Technology. He is an Associate of the US Department of Energy’s Ames Laboratory and professor of materials science at both Iowa State University and the Technion, where he has also served on several Senate Committees. 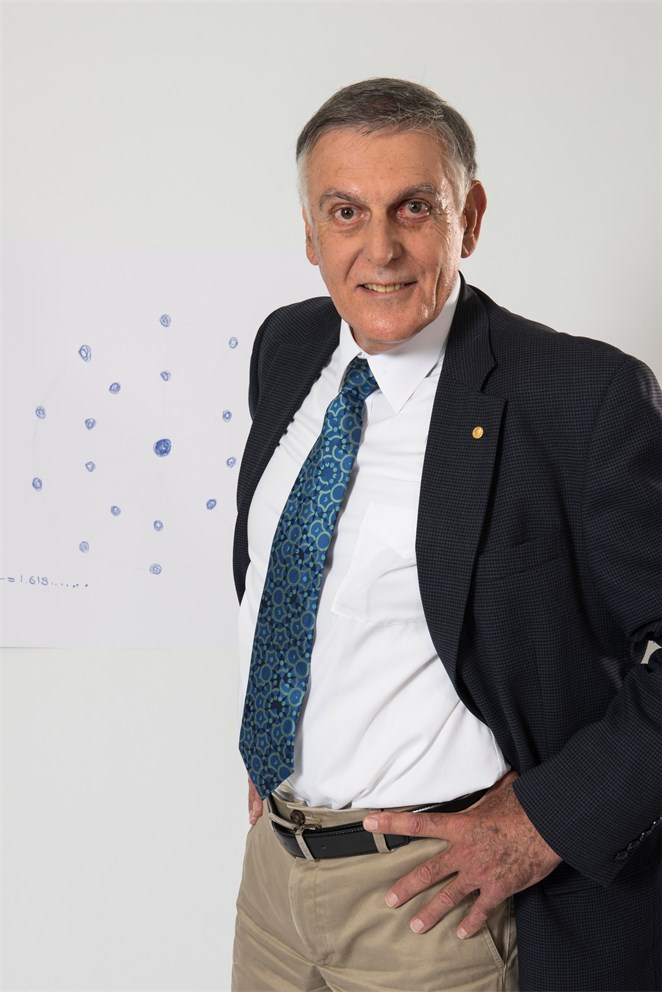 blue tie, Shechtman says, was produced by his university and
shows the structure of quasicrystals which he discovered.
And the tie was made before he won the Nobel Prize!
His drawing used the same blue as his tie,
as close as my crayons can match it.
So, quasicrystals must be blue...

The drawing you see is an electron diffraction pattern, an image of a crystal, taken by an electron microscope. It is a depiction of the pattern Shechtman saw on the day, in 1982, that he first observed a new kind of crystal, known as ‘quasiperiodic’, and it changed our understanding of crystallography forever. “When I saw this diffraction pattern in the electron microscope,” Shechtman recalls, “I was amazed, and in my log book I wrote “10-fold?”” By 10-fold, he was referring to 10-fold rotational symmetry, something completely forbidden by the rules of crystallography. The allowed rotational symmetries of the ‘periodic’ crystals known at the time were 1, 2, 3, 4 and 6. No 5, and nothing beyond 6! Shechtman immediately set out to discover what he had.

The picture could have been explained by ‘twins’, or defects, in a periodic crystal. So, as Shechtman recalls, he first looked for those defects: “I spent the whole day trying to find these twins and I could not find them. So at the end of the day I knew that I had a crystal with a very strange structure. I did not know what it was yet, that took time, but I knew what it was not.” Discovering what actually caused the pattern, and getting people to accept that interpretation, took years. But in the end the study of such quasiperiodic crystals, ordered structures with patterns of atomic arrangement that never repeat, became a field of research of its own.

Shechtman’s discovery introduced irrational numbers into crystallography, and at the bottom of his sketch he has written the formula for the famous golden ratio. “So this number was developed by Leonardo Fibonacci di Pisa, in Italy in the 13th century,” explains Shechtman. “He was really an eminent scientist and anyone who wants to understand quasiperiodicity has to start with him. So this equation is sort of a symbol of all the field that has developed, ever since, in quasiperiodicity.”