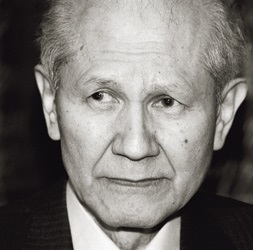 Bioluminescence, from fireflies to creatures of the deep, is such a strange phenomenon that it is hardly surprising that humans have been keen to study and, if possible, mimic or use it for our own ends.

But it was not until 1962 that green fluorescent protein (GFP) was first isolated in the Aequorea aequorea jellyfish. Since then, researchers have developed some important uses for GFP including that of a ‘tagging’ device to track biological processes such as the development of nerve cells or the spread of cancer.

The Nobel committee awarded the 2008 Chemistry Prize to three individuals whose work provided milestones in the history of GFP.

Osamu Shimomura first isolated GFP from the jellyfish A. aequorea, and found that the protein glowed bright green under ultraviolet light. A. aequorea creates its light by releasing calcium ions which bind to a protein that Shimomura named aequorin. It is this calcium binding process that causes the glow.
Shimomura was born in Fukuchiyama, Kyoto, in 1928. The son of an officer with the Japanese Army, he was temporarily blinded by the glare of the Nagasaki atom bomb despite being 10 miles away.

Nagasaki Medical College was obliterated but its Pharmacy School rebuilt a temporary campus near Shimomura's home. He enrolled and gained a BSc in pharmacy in 1951, remaining there as a lab assistant for four years.

In 1955, he moved to Nagoya University as a research student of Professor Yoshimasa Hirata, who set him the task of finding what made the crustacean Cypridina hilgendorfii glow. Shimomura identified the compond responsible and published his findings in the Bulletin of the Chemical Society of Japan, attracting the attention of Professor Frank Johnson at Princeton University.
Princeton had a strong reputation for research on bioluminescence and Johnson recruited Shimomura in 1960, by which time he had gained his Ph.D (in 1960) from Nagoya University.

The pair gathered A. aequorea jellyfish to examine their green luminescence. Shimomura discovered that it was calcium ions that caused the chemical reaction, but his experiments produced blue, not green, light. The blue light is absorbed by green fluorescent protein, which gives off the green light. Eventually he managed to extract the substance intact and purify the blue luminescent protein aequorin. The team also isolated a second protein that shone fluorescent green in ultraviolet light.

In the 1970s, Shimomura demonstrated that the protein contained a chromophore that absorbed the blue light and emitted green light.

In 1982 he left Princeton to join Woods Hole, Massachusetts and Boston University, retiring to Emeritus status in 2001. His work on GFP was continued by others, including his fellow laureates Martin Chalfie and Roger Tsien.

Apart from the Nobel Prize, Osamu Shimomura received the Pearse Prize in 2004, Emile Chamot Award in 2005, Asahi Prize in 2006 and the Order of Culture in his native Japan in 2008.
He met his wife, Akemi, a graduate of the Pharmacy School of Nagasaki. They have a son and a daughter.