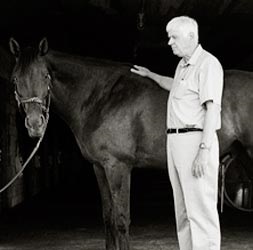 Hamilton Othanel Smith was awarded the Nobel Prize in Physiology or Medicine in 1978 for the discovery and use of ‘type II’ restriction enzymes that break DNA molecules into useful pieces for individual study. The prize was shared with his colleague Daniel Nathans at Johns Hopkins University School of Medicine, in Baltimore, USA and Werner Arber of the University of Basel in Switzerland.
Smith was born in 1931 in New York to a pair of Floridian scholars. In 1937 the family moved to Champaign-Urbana, Illinois, where Hamilton and his brother built a basement laboratory, funded by newspaper rounds. He attended University High School, finishing his science course early and went on to the University of Illinois but in 1950 transferred to the University of California, Berkeley, where he obtained a BA in mathematics in 1952. He received his medical degree from Johns Hopkins University in 1956. He proceeded to Barnes Hospital in St Louis for an internship where he met and married nursing student Elizabeth Bolton. They have four sons and a daughter. In 1957 Smith was called up in the Doctor’s Draft and served with the Navy in San Diego for two years.
With no war going on, he found time to study genetics in San Diego in more ways than one – from books and by fathering his first son. He continued his (academic) studies in 1959 at the Henry Ford Hospital in Detroit, Michigan, concentrating on the genetics of bacteriophages (viruses that infect bacteria). In 1962 he joined Myron Levine at the University of Michigan, studying salmonella. In 1965 they discovered the gene, which controls the phage infection mechanism, now known as the “int” gene. During 1966–67, Levine worked with Werner Arber in Geneva and told Smith of Arber’s research on the action of protective enzymes in bacteria, such as the restriction enzyme, so-called for its ability to restrict the growth of an invading bacteriophage by cutting its DNA to pieces.
In 1967, Smith joined Johns Hopkins University as an assistant professor of microbiology under Daniel Nathans. In the spring of 1969 Smith discovered the restriction enzyme in the bacteria Hemophilus influenza. This was dubbed type II, as an advance on previously known enzymes which cut DNA at random points. The type II’s predictability allowed scientists to cut DNA at a precise point. Nathans used this to explore the possibility of using restriction enzymes to dissect the genomes of DNA tumor viruses. In 1975–76, Smith worked with Max Birnstiel in Zurich, Switzerland, on histone gene arrangement and sequence. In 1995 he and a team at The Institute for Genomic Research sequenced the first bacterial genome (Haemophilus influenza). He later played a key role in the sequencing of the human genome at Celera Genomics, which he joined when it was founded in 1998.
This text and the picture of the Nobel Laureate were taken from the book: "NOBELS Nobel Laureates photographed by Peter Badge" (WILEY-VCH, 2008).
Picture: © Peter Badge/ Foundation Lindau Nobelprizewinners Meetings at Lake Constance