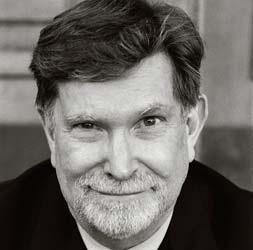 The 2006 Nobel Prize in Physics was awarded for studies of some of the oldest stuff around. It meant looking back into the dawn of the Universe to gain some understanding of the origin and nature of the Universe and of its galaxies and stars. The award was shared by George F. Smoot of the University of California, Berkeley, and John Mather of NASA, “for their discovery of the blackbody form and anisotropy of the cosmic microwave background radiation”. Their work was based on measurements made by the COBE (Cosmic Background Explorer) satellite launched by NASA in 1989. Mather had the Principal Investigator for the blackbody form experiment, and Smoot was for measuring temperature variations (“anisotropy”).

According to theory, cosmic microwave background radiation (discovered by Arno Penzias and Robert Wilson in the 1960s) is the relic radiation from the Big Bang. The frequency spectrum of this relic radiation has a special form characteristic of blackbody radiation. When it was emitted the temperature of the Universe was almost 3,000 K. Since then, the radiation has gradually cooled so that it is now barely 2.72 degrees above absolute zero. Mather’s team was able to calculate this temperature thanks to the blackbody spectrum revealed by the COBE measurements. COBE also sought variations of temperature in different directions. Differences of the merest fraction of a degree offer an important clue to how the matter in the Universe began to form stars, planets and ultimately all life. The COBE results supports the standard cosmological scenario, a Big Bang followed by a rapid inflation, as this scenario predicts the kind of cosmic microwave background radiation measured by COBE. Newer satellites have improved on these results and exploited the observations to measure precisely many of the parameters of the Universe.

George Fitzgerald Smoot III was born in Yukon, Florida, USA, in 1945. He attended Upper Arlington High School in Ohio, gained a dual BSc in mathematics and physics at MIT in 1966, and a doctorate in particle physics in 1970. He then switched to cosmology, collaborating with Luis Walter Alvarez at the Lawrence Berkeley National Laboratory on experiments for the detection of antimatter in the upper atmosphere. Turning his attention to cosmic microwave background radiation (CMB), Smoot set a strict limit on the universe as a whole was rotating, which would have had an effect on the CMB. It was to further pursue the study of CMB that Smoot proposed the Differential Microwave Radiometer (DMR) instrument for the COBE satellite to NASA.

After COBE, Smoot took part in another CMB experiment involving a stratospheric balloon, MAXIMA and then the third CMB satellite Planck. He is also a collaborator in designing the SNAP, a satellite which is proposed to measure the properties of dark energy and the BigBOSS/DESI project to map the location of tens of millions of galaxies.

Smoot has been an astrophysicist at Lawrence Berkeley National Laboratory (Berkeley Lab) since 1974 and a physics professor at University of California, Berkeley since 1994. He is director of the Center for Fundamental Physics at the Hong Kong University of Science and Technology. He was elected to the National Academy of Sciences (2008) and is a fellow of the American Physical Society. He has received several awards among them the Einstein Medal (2003) and the Oersted Medal (2009). 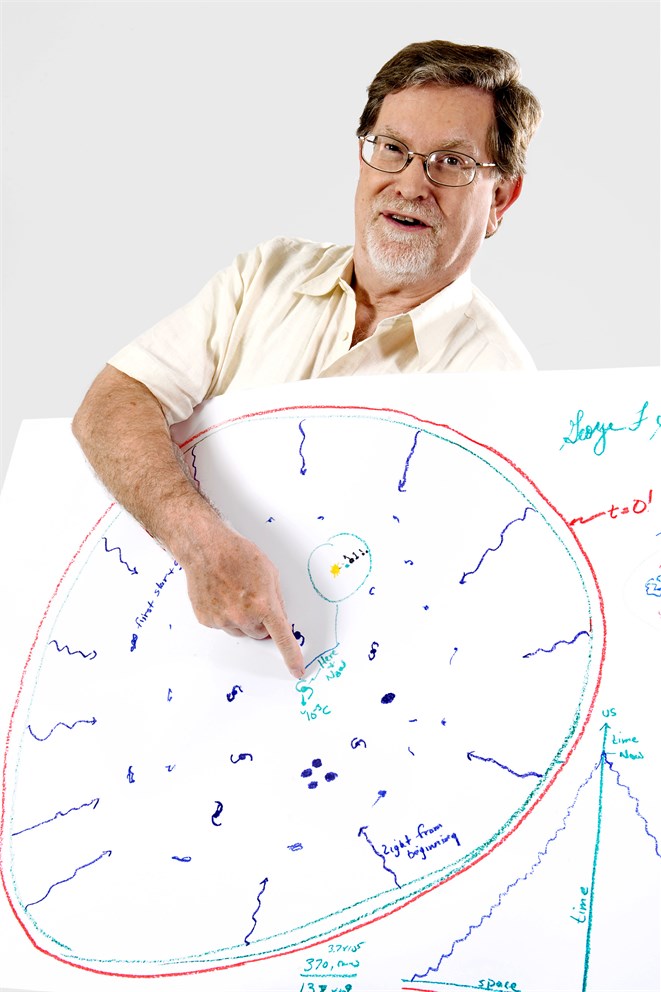 This is a drawing of the entire universe! Wow!
Smoot wants to carry the drawing on his shoulder, just like Atlas carried the world
on his shoulder. But paper just does not have the necessary rigidity,
and we decide to do something else for the shot.
I ask Smoot where we are in the drawing. He points to the centre,
some place close to the sun. “Is that you?”
“No“, he says, “itʼs the observer, he is always in the centre!”

First Light in the Universe
by Adam Smith

“It’s supposed to be spherical, you know,” says George Smoot, laughing. “It is supposed to represent a spherical shell, and what it’s meant to do is to show what we see when we look out at the universe, that is where the light comes from.” We, on earth, are sitting at the centre of Smoot’s map, in the spiral arm of that little green galaxy labeled as the “here + now”. The map shows light streaming in from all directions and from further and further back in time, right back to the beginnings of the universe, 13.7 billion years ago.

Search at the right wavelengths and look in the right places, and you can still see that light emanating from the most distant reaches of time. Furthest away from us on Smoot’s plot is a red circle marked “t=0!”, representing the big bang. Just inside that circle is a little gap, before light is seen to start heading towards us from the green circle. That gap, representing the first three hundred and seventy thousand years, was the period for which the universe remained opaque, the period from which no light remains. But the light from the point when the universe cleared is still with us, referred to as the cosmic microwave background radiation, and it was for satellite observations of that light that Smoot shared the Nobel Prize in Physics with John Mather in 2006. This first light turns out to hold clues to the embryonic structure of the universe.

Although we cannot see into those first 370,000 years of the universe, perturbations in the light we do see paint a picture of what was happening earlier. “It is sort of like if you see vibrations in the movies, right?” says Smoot. “When the dinosaur is moving, the cup of water is shaking and there are little waves in there. And you can see the same thing in the surface of the universe.” In the case of the cosmic microwave background radiation, the ripples in the light are the signatures of imbalances in the distribution of energy and matter in the early universe, the seeds of stars and galaxies to come. Mapping such ripples by satellite observations allowed Smoot to draw the map of the ‘baby universe’ seen top right, a snapshot of how our universe looked on its three hundred and seventy thousandth birthday.